Located out in the wilds near Acton, Indiana, is a place called Acton Campground, which has a bit of a colorful history. It was originally built in 1859 to serve as a religious community for Methodists, as well as a campground and as a meeting place for the Indianapolis District Camp-Meeting Association of the Methodist Episcopal Church, after which it went on to serve as a Civil War hospital. Interestingly, the campground has a long history of mysterious fires, having been burned down and rebuilt three times, in 1864, 1899, and 1905, with some of the fires having freak origins, such as one that was caused by the sparks of a passing train. This is all rather interesting enough as it is, but the campground is perhaps more well-known for a still unexplained supernatural visitation that occurred here that has continued to stir wonder.

In July of 1980, motorcyclist Robert Davidson was on his way to visit his daughter in Indianapolis after his father’s death, and his route took him along I- 74 and past Acton, Indiana. As he passed by the area of Acton campground an ominous thunderstorm sprang up out of nowhere, rain slashed down and thunder reverberated through the sky. Davidson pulled his bike over and began to retrieve some rain gear he had packed. As he did this, a bolt of lightning came hurtling down to strike him in the chest with such force that it allegedly sent him flying right out of his boots and left a gaping, smoking wound behind. When witnesses called it in and paramedics arrived he was sprawled out in the relentless rain, totally still and seemingly dead. It turned out that he was still barely alive, but considering the blast of lightning he had sustained and his vital signs, even as paramedics tried to revive him it was not thought he would survive his ordeal. Finally, his pulse faded and his heart completely stopped, and it seemed as if he was truly gone. That was when something very strange indeed would happen.

According to witnesses at the scene, as well as the three paramedics, Randy Neibert, Kimberly Cobb, and Marylou Shafer, through the rain came a woman dressed in a long black Victorian era dress and with flowing black hair, who approached the scene and stood over the fallen Davidson as everyone wondered who this stranger was. The ambulance also purportedly lost power as she approached, and some other witnesses would later claim that there had been a strange static quality to the air or a cold chill. In her hand she held a Bible, and after looking down solemnly at the dying man she suddenly spoke, telling the paramedics that she knew what to do and that she could save him, begging them “I must touch him! Let me touch him!”

The paramedics were too startled to have even comprehended what was going on before the woman supposedly knelt down next to Davidson and began reciting the 23rd Psalm and what sounded like gibberish while pounding the ground over and over again with her Bible before lightly tapping the fallen man in the chest with it. She then stood, held her Bible up above her head and, as some witnesses would say “spoke in tongues,” before calmly walking off to leave the paramedics just staring open mouthed and dumbfounded next to their supposedly dead patient. One of the paramedics would happen to make the observation that although it was still pouring rain, the “Lady in Black” did not seem to be wet.

The lady sort of vanished into the growing crowd of onlookers and the ambulance suddenly jumped to life once again, startling the paramedics, but even more startling still was when Davidson suddenly gasped for air. He was rushed to the hospital emergency room, where he would fall into a coma, but eventually make a full recovery, displaying no side effects or brain damage at all from his harrowing ordeal, and leaving doctors totally stumped. They could not figure out how he had been resuscitated from having no heartbeat, let alone why the lightning hadn’t killed him or how he had managed to emerge from it in perfect health. It was an oddity. 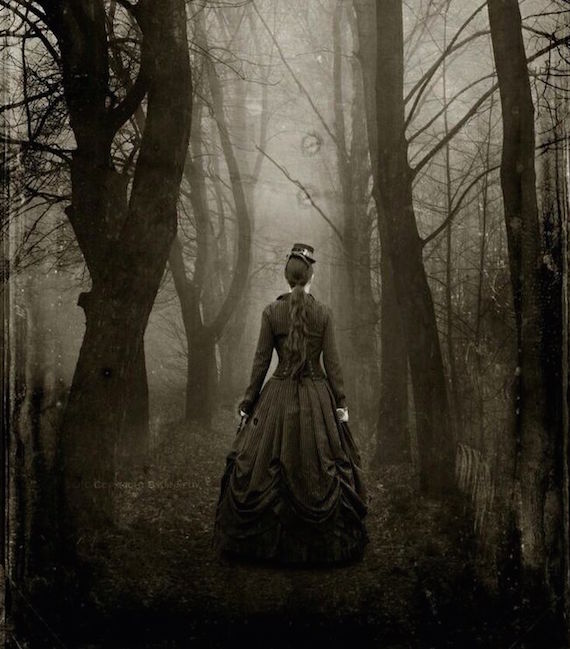 After this, attention turned to the mysterious “Lady in Black” who had been witnessed, and oddly, while many had seen her, including the paramedics, some in the crowd claimed that they had seen no such lady, pushing it all further into weirdness. There have been many theories on who the mysterious woman could have been. For some she is a restless spirit from the days of the spiritual retreat. In other theories she was an angel, descending on this occasion for whatever reasons to save this man. Others still have said that she was the spirit of one of the victims of one of the many fires that had torn through here, or even the ghost of a Native American, although this is a bit of a stretch since she was clearly described as being in Victorian era clothing. Another idea still is that this was the spirit of a certain ghost seen in the immediate vicinity from time to time, said to be that of a woman who once lived in the area and used to always dress in the exact same type of long black dress. A similar black dress has since been donated by a descendant of the woman to the Franklin Township Historical Society, where it remains on display.

The curious case of Robert Davidson has gone on to be debated and featured on TV shows such as Unsolved Mysteries, but we are not really any closer to finding true answers. Whether it was the ghosts of the pasts, an angel, or just delusions, something brought that man back from certain death. What that may have been, no one knows, and it remains a mysterious anomaly, and a medical miracle.

Changing Faces: Why Some Scientists Worried About Interest in Aliens and the “Face” on Mars