A Tale of a Juvenile Man-Beast?

In 1870, a now defunct California-based newspaper, the Antioch Ledger, published the fascinating account of a man named Samuel de Groot, a hunter who may very well have had a close encounter of the large and hairy kind. The incident reportedly occurred in the previous year, 1869 at Orestimba Creek, Stanislaus County, California. It clearly demonstrates that sightings of anomalous, large apes in the United States are nothing new. de Groot said: “Last fall I was hunting in the mountains about 20 miles south of here, and camped five or six days in one place, as I have done every season for the past 15 years.  Several times I returned to camp, after a hunt, and saw that the ashes and charred sticks from the fireplace had been scattered about. An old hunter notices such things, and very soon gets curious to know the cause.  Although my bedding and traps and little stores were not disturbed, as I could see, I was anxious to learn who or what it was that so regularly visited my camp, for clearly the half burnt sticks and cinders could not scatter themselves about."

de Groot continued: "I saw no tracks near the camp, as the hard ground covered with leaves would show none. So I started in the circle around the place, and 300 yards off, in damp sand, I struck the tracks of a man’s feet, as I supposed, bare and of immense size.  Now I was curious, sure, and I resolved to lay for the barefooted visitor. I accordingly took a position on the hillside, about 60 or 70 feet from the fire, and, securely hid in the brush, I waited and watched. Two hours and more I sat there and wondered if the owner of the feet would come again, and whether he imagined what an interest he had created in my inquiring mind, and finally what possessed him to be prowling about there with no shoes on.

“The fireplace was on my right, and the spot where I saw the track was on my left, hid by the bushes. It was in this direction that my attention was mostly directed, thinking the visitor would appear there, besides, it was easier to sit and face that way. Suddenly I was surprised by a shrill whistle, such as boys produced with two fingers under their tongues, and turning quickly, I ejaculated: ‘Good God!’ as I saw the object of my solicitude standing beside the fire and looking suspiciously around.  It was the image of a man, but could not have been human. 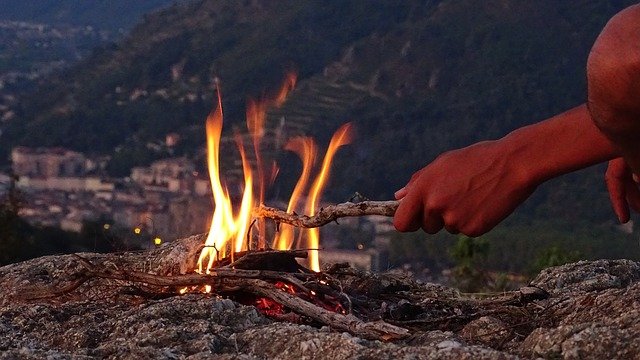 “I was never so benumbed with astonishment before. The creature, whatever it was, stood fully 5 feet high, and disproportionately broad and square at the fore shoulders, with arms of great length. The legs were very short and the body long. The head was small compared with the rest of the creature, and appeared to be set upon the shoulders without a neck.  The whole was covered with dark brown and cinnamon colored hair, quite long on some parts, that on the head standing in a shock and growing close down to the eyes, like a Digger Indian’s.

“As I looked he threw his head back and whistled again, and then stopped and grabbed a stick from the fire. This he swung round, until the fire at the end had gone out, when he repeated the maneuver. I was dumb, almost, and could only look. Fifteen minutes I sat and watched him as he whistled and scattered my fire about. I could easily have put a bullet through his head, but why should I kill him? Having amused himself, apparently, as he desired, with my fire, he started to go, and, having gone a short distance returned, and was joined by another - a female, unmistakably when both turned and walked past me within 20 yards of where I sat, and disappeared in the brush.

“I could not have had a better opportunity for observing them, as they were unconscious of my presence.  Their only object in visiting my camp seemed to be to amuse themselves with swinging lighted sticks around.  I have told this story many times since then, and it has often raised an incredulous smile; but I have met one person who has seen the mysterious creatures, and a dozen of whom have come across their tracks at various places between here and Pacheco Pass.”

Of particular interest in this case is the height of the Bigfoot. Or, rather, its profound lack of height. At just around five feet tall, it hardly resembled the classic, seven to eight feet tall Bigfoot of the Pacific Northwest. Unless, of course, what de Groot encountered was a juvenile Bigfoot. That the creature seemed to enjoy playing with the fire, and whistling at the same time, is, perhaps, an indication it was, indeed, a youngster, roaming around and having a bit of fun.

Sea “Serpent” or Something Else? The Enduring Enigma of Mammalian Sea Monsters