“Rachel is going to get destroyed.”

Those aren’t the words of avenging aliens protecting the base where they secretly live and work. Nor are they a warning from the U.S. Air Force which also operates out of the Nevada Test and Training Range more popularly known as Area 51. No, those are the words of a resident of Rachel, Nevada, whose townspeople, unlike those who look nostalgically back at the original Woodstock, relate more to the residents of Wallkill, New York – the original location picked for the Woodstock festival in 1969 until its townspeople protested and the Zoning Board of Appeals denied a permit, forcing the organizers to instead destroy – sorry, move to – Bethel, New York. (Trivia time: Like Area 51, the actual town of Woodstock was never seriously considered for the concert – it was the proposed location and name of the recording studio that eventually became the company that promoted the event.)

“I’ll do anything in my power to prevent this.”

Doing his best impression of an Old West pioneer whose newly-built log cabin is about to get overrun by a herd of buffalo the size of Buffalo, Joerg Arnu, who has lived in Rachel since 2003 and runs a website for actual tourists, told TIME that he’s fighting tooth-and-nail to block the event formerly known as “Storm Area 51, They Can't Stop All of Us” from storming Rachel and its 50-some residents on the weekend of September 20th. He and other residents are meeting with the Lincoln County board of commissioners to discuss ways to stop what is now officially called Alienstock. According to TIME, the proposals include shutting down State Route 375 (a.k.a. the Extraterrestrial Highway) and requiring a bond of up to $5,000,000 to hold concertgoers responsible for the damage, destruction and possible deaths they leave behind.

“We have no fire department out here. If a fire started, there’s no way of putting it out. There’s just a lot of reasons not to have this many people here without a serious planned system set up for it.”

Longtime Rachelite Bob Clabaugh sounds worried. However, like the organizers of the original Woodstock event, Matty Roberts – the comedian who started "Storm Area 51” as a joke and is trying to turn it into a music festival – assures locals that attendance will be no more than 25,000 people. Rachel residents might be interested to know that Wallkill was told no more than 50,000 would attend Woodstock. Their Zoning Board of Appeals managed to ban the concert by stating that the planned portable toilets would not meet town code. Would this work for Rachel?

“I’m not opposed to [Alienstock] if it’s done correctly. But at this point, it’s not being handled correctly and it’s certainly not tenable.”

Clabaugh told TIME he hopes so. Meanwhile, organizer Brock Daily is trying to assure concerned residents that he, Roberts and their partners are nothing like those money-grubbing Woodstock organizers.

“We’re not really about it for the money. We’re standing in front of a huge potential movement here.”

It’s not clear what exactly the “movement’ is, but it’s not about peace, love, rock and pot. So far, the still-unannounced bands will be playing electronic dance music and attendees will imbibe in light beer and roast beef while watching strippers perform – OK, that’s one little remote similarity to Woodstock’s skinny-dippers.

“I’m just as terrified as they are. I live here too, and I’m just doing my best.” 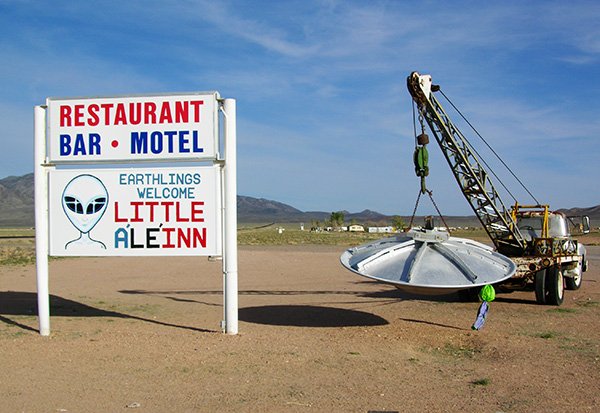 Even Connie West, the owner of the Little A’Le’Inn – the only hotel in town and the one place that stands to make a profit … assuming it’s not destroyed in the process – is now more worried than supportive. Like Bethel after Max Yasgur agreed to let his farm host Woodstock, the town of Rachel is accepting the fact that the rock of Alienstock is rolling down the hill and has picked up enough speed that it can’t be stopped. The organizers agree.

“We created a monster and now we need to organize it. People are gonna be going out there no matter what.”

If only this were Alienstock 50.

Cosmic Secrets and the Bizarre Tale of the Book of Urantia