If all you know about classic fairy tales and bedtime stories is what you’ve seen in Disney movies or children's books, then you know nothing about the original telling of these stories and the sometimes horrific tales of murder and mayhem they really are. That should have been apparent earlier this month when the gravestone was discovered of the woman whose sad life as a tormented stepdaughter in a mining town where children and dwarfs were forced to work in cramped, dirty tunnels became the basis for the story of Snow White. Now, as the home that is said to have inspired the tale of Goldilocks and the Three Bears goes up for sale, we learn the real story of three all-male bears (surprise!) and who really messed up their house and stole their food before running off into the woods ... or perhaps suffered a worse fate. Spoiler alert: the original title of this tale was “The Story of the Three Bears.” Sorry, Goldie!

One day, after they had made the porridge for their breakfast, and poured it into their porridge-pots, they walked out into the wood while the porridge was cooling, that they might not burn their mouths, by beginning too soon to eat it.”

If you think you know who or what comes next, you don’t. No golden-haired girl looking for food. Most literary scholars say it was an old woman, based on “The Story of the Three Bears” that was believed to have been written by English poet Robert Southey. That story was published anonymously in one of his collections in 1837 and attributed to him in another collection published in 1848. More on Southey later because it turns out his was not the first telling of this tri-bear tale. 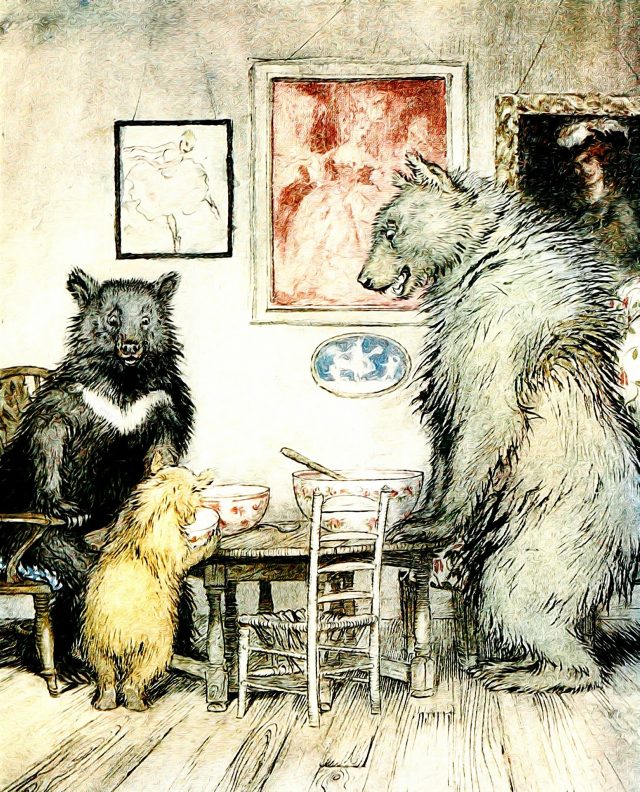 Some scholars attribute the story to Eleanor Mure, who wrote a version in 1831 for her nephew’s fourth birthday. She obviously wanted to scare the little boy because the mean old lady in her tale gets caught by the bears, who are so angry that they try and fail to set her on fire and drown her before they finally succeed in killing the poor porridge-pilfering woman by impaling her on a church steeple! Now try and fall asleep, my little nephew!

However, Mure’s version may not be the first either. There’s an earlier (by at least two decades) old English tale of a fox named Scapefoot who broke into a castle owned by three bears, stole their porridge, messed with their stuff and suffered the same fate as Mure’s old woman. Sweet dreams, my little kiddies.

Poet Robert Southey obviously wanted to sell more books, so he cleaned up the story, which he may have heard from his uncle. “Fox” was also a derogatory term for an old woman, so it became one who was nasty – she was thrown out by her family for being foul-mouthed, dirty and more (we’ve never been nice about our older women -- some things never change) but at least she lives ... when the bears find her asleep with a belly-full of porridge, the little bear’s cries awaken her and she jumps out of the window and runs away. 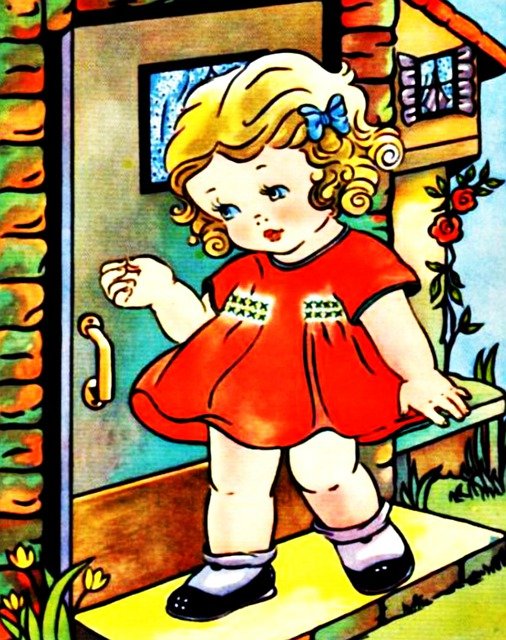 How did the story change from a nasty crone to cute little Goldilocks? That switch is generally attributed to Joseph Cundall, whose 1849 collection, Treasury of Pleasure Books for Young Children, included the story of the three bears but changed the old lady to a young girl named Silver-Hair. Wait, what? That version was retold many times and Silver-Hair evolved to Silver Hair, Golden Hair, Silver Locks and the winning choice -- Goldilocks. The three male bears also changed to the familiar Papa, Mama and Baby Bear. Both changes were much more acceptable to illustrators, whose pictures were the real selling points of these collections. While Goldilocks moved to top billing, most kids even today still sympathize with the smallest bear, whose porridge was eaten and chair broken.

Why are we talking about Goldilocks and the Three Bears again?

Oh yeah – the house that inspired Robert Southey’s version is for sale.

“If you’ve ever dreamed of living in a fairytale cottage, this place is ‘just right’ – as the house which inspired the childhood story Goldilocks and the Three Bears goes on sale for £995,000."

That’s 1.2 million in US dollars for the “fairytale cottage” -- now called Burton Cottage – that sits on the edge of the New Forest National Park (a great place for an old woman burglar to hide out) and, at least from the outside, looks like a quaint home that would house three bears comfortably, with each having its own bedroom and one for ‘invited’ guests. However, the remodeled inside now screams “bull market” rather than bear. It’s all modern and elaborately decorated – there’s even chandeliers in the bathrooms. (Pictures here.) The huge refrigerator can hold much more than porridge and the kitchen has a microwave to heat up cold meals. All that plus the scenery and the Three Bears story and it might be worth $1.2 million.

Burton Cottage is in Christchurch, Dorset, on the southeastern coast of England and has been up for sale before – the last time in 2017 at a higher asking price of £1.15 million ($1.4 million). According to his biography, Southey was born in Bristol, educated in London, lived with his first wife in Keswick, spent time in Scotland and the Netherlands, and died and was buried in Keswick. The earlier real estate listing says he lived in Burton Cottage from 1799 to 1805 and he came up with the story in 1813. Southey’s biography points out that this was about the time he and fellow writer Samuel Taylor Coleridge became involved in early experiments with nitrous oxide (laughing gas) conducted by the renowned scientist Humphry Davy and became a regular user – inhaling it in a gas chamber invented by steam engine inventor James Watt or mixing it with wine as a hangover cure. (Kids, don't try this at home.)

Was “The Story of the Three Bears” inspired by Burton Cottage or was it from a laughing gas hallucination?

Ask the real estate agent. Maybe you can get them to knock off a few hundred-thousand from the price.