In 1903, a man named Oscar Frederickson, of Winnipegosis, Canada wrote a fascinating and extensive report on his knowledge of huge lake monsters in the early decades of the twentieth century, all of which came from witnesses, both first- and second-hand. He began his account like this: “In 1903, I lived with my parents on Red Deer Point, Lake Winnipegosis. Our house was situated about two hundred yards from the shore. About a mile south of our place lived a man by the name of Ferdinand Stark. One day Stark was down by the lake shore when he saw what he thought was a huge creature in the lake. It was moving northward along the shore, a short distance out. Stark wanted someone else to see the strange animal, and as we were his nearest neighbors, he came running along the lake to our place. All the while, he could see the creature moving in the same direction as he was, only going a little slower than he was running.

“Stark arrived at our home very much excited and breathing heavily, and asked my dad and mother to hurry down to the lake to see a strange animal in the water. By the time my parents got down to the lake shore, there was nothing to be seen. Whatever Stark had seen had disappeared. Looking somewhat bewildered, but still visibly excited, Stark began to describe what he had seen. All he could see of the creature was its big back sticking out of the water, and it was very dark or black in color. A number of gulls followed it and kept flying down to it as if they were picking at it. My parents did see quite a number of gulls still flying around.

“In 1935, Mr. Cecil Rogers of Mafeking and I made a trip to Grand Rapids on Lake Winnipeg. While there, I called on Mr. Valentine McKay, a resident of Grand Rapids for many years. As we were talking, the conversation drifted to strange animals that had existed at one time. To my surprise, McKay said he had seen some such animal in Lake Winnipegosis.” McKay, very pleased by the fact that Frederickson took his story seriously and did not poke fun at him, prepared a carefully written statement for the monster hunter, which read as follows:

“In September, 1909, I was traveling alone in a canoe from Shoal River on Lake Winnipegosis to Grand Rapids on Lake Winnipeg. At the time I saw this animal I was standing on the lake shore. I had stopped at Graves’ Point to make tea. I was at the edge of the bush getting willows for a campfire, when I heard a rumbling sound like distant thunder. As I looked out on the glassy surface of the calm water, I saw a huge creature propelling itself on the surface of the water about four hundred yards out from shore. A large part must have been submerged, judging by the great disturbance of the water around it. 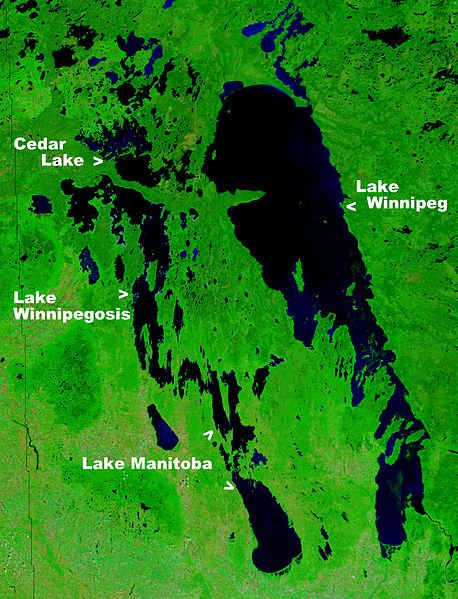 The creature’s dark skin glistened in the autumn sun, said Frederickson, "and I estimated it was moving at the rate of two to three miles an hour. As I watched it, a member of the body shot up about four feet, vertically, out of the water. This portion seemed to have something to do with the creature’s method of locomotion. The course it was taking was toward Sugar Island or Sleep Rock. I watched it till it went out of sight. The number of gills, hovering around this creature, followed it as far as I could see.”  Frederickson had something notable to say on this particular story: “Mr. McKay said he had described this creature to a geologist by the name of Craig who said it was quite possible that it was a remaining specimen of a prehistoric animal that was once plentiful.”

On the matter of the two men in question – Ferdinand Stark and Valentine McKay – Frederickson made a number of observations and comments: “A great many people will think these two men just made up a story about seeing some strange animal or creature in Lake Winnipegosis. But, it is hardly probable that both men would think up a yarn about the gulls. Stark and McKay never met, as far as I could find out. Stark moved from Winnipegosis about 1904 or 1905, and where he is now, if still living, I have not been able to find out.”

Frederickson had yet another account to relate on this particular matter of unidentified, large beasts on the loose in the early part of the twentieth century: “In 1934, Captain Sandy Vance lived on Graves’ Point. One day he was over at Sitting Island, which is on the northeast side of the point. He saw what he thought was a huge animal a short distance off shore. Vance said it was the biggest living creature he had ever seen in water. Mr. Vance had been captain on freight tugs for many years on Lake Winnipeg and Lake Winnipegosis. He said he had often seen moose and deer in water, so there is no reason not to believe that he saw some strange living creature. Captain Vance died some years ago. He was well known here.”

And, finally, there is the following, short but intriguing, account from Frederickson: “There are quite a few Natives who have seen some strange thing. They call it ‘the big snake.’ Those of Shoal River claim that a monstrous animal was seen often off Sugar Island and Steep Rock in Dawson Bay during the latter part of the 19th century.”