Adam Staples and Lisa Grace were out searching in an unploughed field on a farm in the Somerset area in January of this year when they discovered one of the biggest ever treasure hoards in British history. They found nearly 2,600 ancient coins that date back 1,000 years and have an estimated worth of approximately £5million (just over $6.1 million in American money). Many of the coins were in mint condition and could be worth as much as £1,000 and £5,000 each. 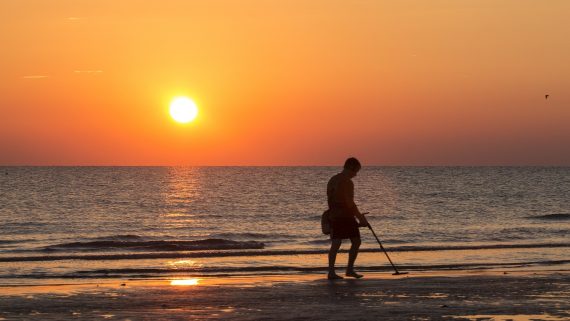 The silver coins included King Harold II pennies which were from the end of Anglo-Saxon England, as well as William the Conqueror coins which date back to after the 1066 Norman Conquest. Since King Harold only reigned for nine months, coins from that time period are extremely rare. Experts believe that a wealthy person of importance probably buried the coins as they were worth quite a bit of money at that time. It has been estimated that whoever buried the coins would have done so after the year 1066 but before 1072.

After the couple found the coins, they contacted the county’s local finds liaison officer and the “treasure” was brought to the British Museum in London so they could evaluate them. The coins will be displayed for the public to see later this week. If the coins are declared as a treasure, the museum will pay the couple for the coins (landowner will get 50% of their value), however, if the museum decides that they don’t want the coins, they will be returned to the couple who would then be able to sell them on their own.

A spokesman for the British Museum stated, “We can confirm that a large hoard of late Anglo-Saxon and Norman coins was discovered in January and has been handed in to the British Museum as possible Treasure under the terms of the Treasure Act (1996). This appears to be an important discovery.”

The largest collection of buried coins and artifacts ever discovered in Britain was the “Staffordshire Hoard” that a treasure hunter found in 2009. The large 1,300-year-old collection of Saxon gold included gold sword hilts, early Christian crosses, and jewels from Sri Lanka. The hoard was valued at around £3.3million (just over $4 million in American funds). And while Mr. Staples and Ms. Grace’s discovery is smaller, it is at least £1million more valuable.

The couple have remained pretty quiet about their findings, but they did do an interview with Treasure Hunting Magazine where they described their discovery as “amazing” and “absolutely mind-blowing”. You can see pictures of the coins here.

The Mysterious Vanishing and Death of Dr. James McGrogan