Take heart, Pluto-is-a-planet believers. You have a comrade at NASA. In fact, it’s the head honcho himself – Jim Bridenstine, the current NASA Administrator. While on a recent tour of the University of Colorado Boulder’s Aerospace Engineering Sciences Building, Bridenstine unexpectedly blurted this out:

"Just so you know, in my view, Pluto is a planet. You can write that the NASA administrator declared Pluto a planet once again. I'm sticking by that, it's the way I learnt it, and I'm committed to it."

OK, we just wrote it, Jim. However, does it really mean anything? Is Pluto officially a planet again? Will science textbooks and science fair solar system models be forced to change once more? What about some of the other so-called dwarf planets – at least one of which is actually larger than Pluto? Should they start lobbying?

In 2006, the International Astronomical Union (IAU) issued an official proclamation on the definition of planets, which included this bad news for Pluto:

A "dwarf planet" is a celestial body that
(a) is in orbit around the Sun,
(b) has sufficient mass for its self-gravity to overcome rigid body forces
so that it assumes a hydrostatic equilibrium (nearly round) shape,
(c) has not cleared the neighbourhood around its orbit, and
(d) is not a satellite.

The IAU further resolves:
Pluto is a "dwarf planet" by the above definition and is recognized as the
prototype of a new category of Trans-Neptunian Objects.

The reason for Pluto getting voted off the planetary island by the IAU is that it has not used its gravitation to clear the area around it of space debris. The International Astronomical Union, founded in 1919, is an organization of the world’s astronomers whose mission is “to promote and safeguard the science of astronomy in all its aspects” and whose primary purpose is to hold scientific meetings. However, deeper down in its mission statement, it also takes on the responsibility of serving as “the internationally recognized authority for assigning designations to celestial bodies and surface features on them.” Did we get to vote on this? Can we vote them out now? 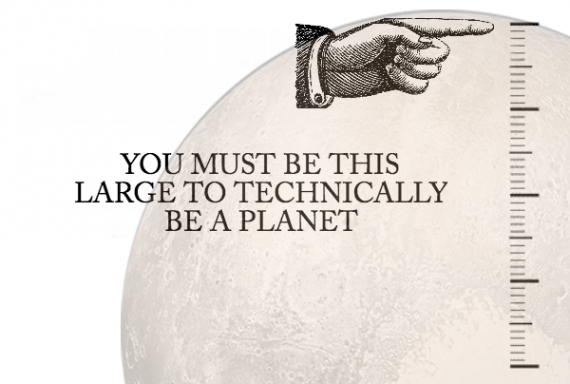 One astronomer thinks so. Planetary scientist Alan Stern, leader of NASA's New Horizon's mission – the one that sent back all of those fabulous photos of Pluto – had this to say about the IAU.

"My conclusion is that the IAU definition is not only unworkable and unteachable, but so scientifically flawed and internally contradictory that it cannot be strongly defended against claims of scientific sloppiness, "ir-rigor," and cogent classification. The New Horizons project, like a growing number of the public, and many hundreds if not thousands of professional research astronomers and planetary scientists, will not recognise the IAU's planet definition resolution of Aug. 24, 2006."

Stern was, and still is, mad enough to invent a new word to describe the lack of stiff scientific discipline (ir-rigor) by the IAU in knocking Pluto out of the planet club. Bridenstine is no astronomer (hence not a member of the IAU) and his only qualifications for the NASA administrator job were that he’s a former Republican congressman who once ran the Air and Space Museum in Tulsa. He’s also a former climate change skeptic who has since publicly admitted he’s changed his mind about that, so perhaps he can get the IAU to change ITS mind about Pluto. He can use those NASA New Horizon photos showing Pluto’s mountain ranges and plains, evidence of avalanches, plutoquakes and possible liquid oceans, and its nice spherical shape, which many scientists now believe are all better signs that a space rock is qualified to be a planet.

We love an underdog. You go, Pluto!