The fifth largest body of water in Sweden, Storsjön Lake has something in common with Loch Ness, Scotland. No prizes for guessing what it is: a lake monster. Or, perhaps, an entire colony of them. Its name is Storsjöodjuret, and it’s a creature with a long history. In 1635, a priest named Morgens Pedersdens wrote the following, which suggests the Swedish Nessie is a beast of supernatural proportions, rather than one of a flesh and blood nature:  “A long, long time ago two trolls, Jata and Kata, stood on the shores of the Great-Lake brewing a concoction in their cauldrons. They brewed and mixed and added to the liquid for days and weeks and years. They knew not what would result from their brew but they wondered about it a great deal. One evening there was heard a strange sound from one of their cauldrons. There was a wailing, a groaning and a crying, then suddenly came a loud bang."

The story continues: "A strange animal with a black serpentine body and a cat-like head jumped out of the cauldron and disappeared into the lake. The monster enjoyed living in the lake, grew unbelievably larger and awakened terror among the people whenever it appeared. Finally, it extended all the way round the island of Frösön, and could even bite its own tail. Ketil Runske bound the mighty monster with a strong spell which was carved on a stone and raised on the island of Frösön. The serpent was pictured on the stone. Thus was the spell to be tied till the day someone came who could read and understand the inscription on the stone.”

Fifty years later, in 1885, the monster was still attracting the attention of people in the region of Storsjön Lake. Andreas Plantin stated of the serpent of the deep: “It is said that beneath this stone lies a dreadfully large head of a serpent and that the body stretches over Storsjön to Knytta by and Hille Sand where the tail is buried. The serpent was called a rå and therefore shall this stone be risen. Since no one peacefully could cross [Storsjön], the ferryman and his wife states, along with many others, that in the last turbulent time this stone was tore down and broken in two. As long as this stone laid on the ground many strange things occurred in the water, until the stone was risen and assembled anew.”

The stone to which Plantin was referring to was the Frösö rune-stone. For those who may not know, rune-stones are ancient, raised stones inscribed with runic symbols. That the Storsjöodjuret has a connection to the Frösö rune-stone is yet another indication that in times past the beast was perceived as a paranormal one. It’s important to note, however, that the Storsjöodjuret is not just a creature of the distant past. The 1970s saw a number of significant encounters with the creature. On August 2, 1973, a man named Ragnar Bjorks had a notable sighting of the monstrous serpent. He said at the time:

“As I am the fisheries officer in this area and I was out checking to see that all the anglers had there valid permits. But instead of anglers I saw something peculiar, a big tail that was about 0.5 meters high just above the surface. At first I thought it was a piece of driftwood. But when I got closer I saw a colossal fish whose tale was out of the water. My rowing boat is 3.8 meters long and I estimate that the fish was 2 meters longer than my boat. When I was by the side of this monster I took my oar and hit it straight over its back.” By Bjorks’ own admission, “I shouldn’t have done that.” He explained why: “In the same moment the animal slapped the water with its tail so that the boat was thrown 3 or 4 meters into the air. Strangely enough, the boat came down again on its keel but I had to balance it. I believe that God was with me then.”

As for the specific description of the beast of the waters, Bjorks said: “The creature was grey/brown on top and yellow underneath and was 5½ to 6 meters long. I think it was a marl, a voracious, predatory fish that grows over 16 feet long in some countries. Yes, it was a real experience and many people will think that this Storsjöodjuret is a mere fake, but I’ve seen it with my own eyes and I’m not afraid to talk about it. Some years ago my wife saw it. It had two humps and was slowly moving forward. I didn’t believe her but now I’m convinced.” 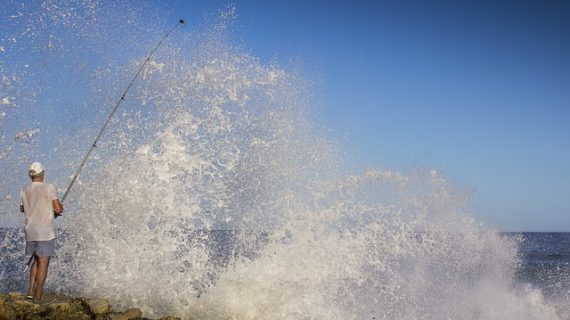 Also convinced were Rolf Larsson and Irene Magnusson, who saw the legendary monster three years after Ragnar Bjorks. It was July 1976 when the pair, fishing on the lake at the time, had an extraordinary encounter. Larsson said: “We were about 500 meters from land and we were going home when we passed a buoy. Suddenly some waves rocked the boat. Fifty or sixty meters from us between land and the boat we saw something that moved under the surface. Then it came up to the surface, not with a splash but with smooth waves. The part of the body we saw above water was not more than 20-30 cm high and about 1 meter long. But from the amount of water it displaced we could see that it was a large object beneath the surface. I would like to compare it with an upside-down boat; you only see the keel of it. Irene was as pale as a corpse.”

Like the Loch Ness Monster, Ogopogo, and Champ, the Storsjöodjuret continues to be seen. And, just like the “big three,” it continues to elude capture and identification. The mystery of Sweden’s most famous monster lives on.