There are numerous strange encounters reports out there with things that seem to lie outside of the normal categories of spirits and cryptids. Such tales seem to defy all efforts to classify them or make sense of, and can serve as baffling conundrums. Among these are some reports that feature various hoofed entities that are very much in keeping with the common image of devils or demons, and which are just about as bizarre as can be. The most well known of these is the Jersey Devil, which we will not get into here, but there are numerous other accounts of things just as strange. Here we will look at some reports of bizarre hoofed entities like the demons of lore, which lie somewhere out in realms we do not understand, and were perhaps not meant to.

One curious report comes from the site Paranormal Studies & Inquiry Canada, and concerns a witness who had an encounter with some sort of hoofed, demonic beast while camping in the woods near the town of Uxbridge in the 1980s. At the time he was much younger, and had been at a Boy Scout camp, where he shared a tent with some others. One evening, they heard something snorting and huffing outside their tent which sounded “like a bull,” and whatever it was began to circle the tent and bang on the sides of it, the whole time making footsteps that sounded like hooves clopping along. By this time the scouts were terrified, and the witness says of what happened next:

I first thought my uncle was playing a joke on me.I soon realized the lung capacity of this breathing far exceeded that of a man. The sound was in another room at first. Next, I heard what sounded like hooves on the old wooden floor moving towards me. The noisy steps stopped in the doorway to the room I was in. The deep breathing continued and my heart was now racing. I thought that would be the end of it but then the steps continued rapidly to where I was laying on the floor. The two massive hooves came to rest straddling me in my sleeping bag. The "being" was pulling at my sleeping bag trying to uncover my face.I felt as though I was being partially lifted from the floor from the force. I was terrified and fought with everything I had to avoid seeing the face of the intruder. I screamed with everything I had and after a few seconds the "being" retreated. I heard three rapid steps as it departed beyond my head then it vanished. 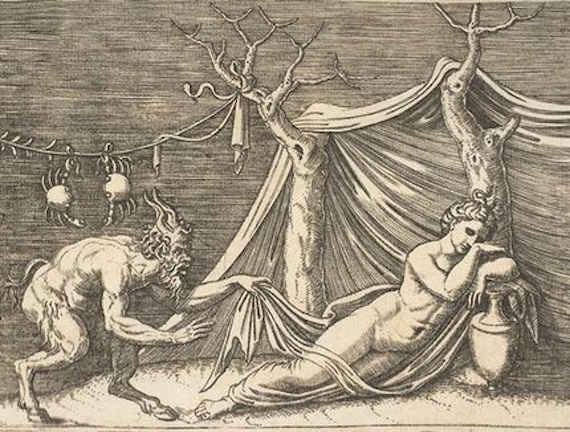 What was this? Was this a ghost, demon, or something else? Another report comes from Your Ghost Stories, where a witness explains an encounter with a similar entity in California in the early 2000s. The witness says that at the time she was just 18 years old, and that her and her friend Jessica had been deep into the occult, including witchcraft and using Ouija boards. They dabbled in all kinds of rituals and seances, and then one day her friend told her that she felt a negative presence in the house, which the witness also started to notice. She says:

I too felt a presence, or like there was more than one supernatural "thing" in the house. Jessica ended up going to her family's for a little while, so I had my bedroom all to myself. My bed was a daybed that was up against the wall, with the bedroom door right at the foot of the bed. The edge of the bed where my head was, is a closet. Across the room adjacent to the bed were two long windows that went from wall to wall. One night I was sleeping facing the windows, I woke to a slight tapping sound. I slowly opened my eyes, and saw a goat looking in the window. It had red eyes and horns with hooves placed on the windowsill. I was PETRIFIED. I slowly closed my eyes and turned my back pretending I didn't see anything. I kept hearing a little tap, but forced myself to sleep. This happened twice then never again.

I told my mom about something at my window, and she told me "I know there is something in this house. You and Jessica invited it in." I don't know if that is true, but whatever it was... I didn't want it to come back. It never did, and I hope I will never see it again. I was NOT dreaming and I know it as a fact. Does anyone know what this could have been? To this day it still gives me the chills thinking about it. Out of all my experiences with the "supernatural", this was the eeriest.

Again with a hoofed entity like something out of a horror film. What are we to make of this? From the site Native Ghost Stories and Other Paranormal Entities we have a tale that was relayed to the witness by her family, but which is no less creepy. She reports:

This a story my mom and the rest of my family have told me. They said that my aunt was in the bathroom one morning around 5 o'clock. It was still dark out and she was getting ready for work. While she was in there doing her business, a hand started coming in from the window. She started screaming so loud that she woke up everybody in the house. What's even stranger is that when they went to look outside, they saw hoof prints, like a goat would leave, on the porch. It or whoever it was came down the drive way onto the porch to door and turned to go around the house. They never knew what it was. 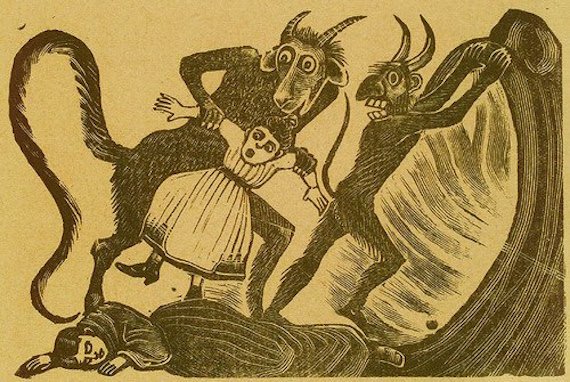 A few very weird reports have been conveyed to me personally. In one, the witness says he had been driving along a rural road in the state of Colorado when he noticed someone one the side of the road ahead. At the time, it had been rather foul weather, and a mixture of rain and snow had been raining down upon them. The witness pulled up beside what he at first thought was a man perhaps in trouble, but it turned out to be anything but. He explained to me:

I noticed that his body proportions were all wrong, and that his legs were long and thin. I realized something was wrong but I didn't know what it was yet. I still though there might have been an accident or something, so I pulled up next to this strange man, and that was when I noticed that he had skinny, goat-like legs ending in hooves, and he looked up at me with a muzzled face I will never forget. Those eyes were like embers, and I got the distinct sense that it did not want to be bothered. I pressed the accelerator and I was out of there.

In another account, the witness says she was out at her grandparents' rural farm in Texas, and that she had had the habit of sitting out of the porch at dusk to watch the changing colors of the sky. One evening she was sitting out there as usual when she saw a very strange sight indeed. Something came wandering out into view that seemed to be neither human nor animal, and it began to meander across the landscape towards her. The figure looked hunched over at first, but as it approached it suddenly stood up on two legs and she could see that it was far stranger than she could have imagined. She says:

It looked like some kind of demon, standing upon goat-like legs ending in hooves, and it made a snorting sound the likes of which I had never heard. It took a few steps towards me, its hooves clopping heavily upon the hard-packed earth, and it just sort of stared at me. It's face was somewhat human, but contorted and with dimensions that were sort of off, and it had two horns perched upon its head. the thing, whatever it was, examined me, cocked its head as if in curiosity, and then bolted away. And I mean BOLTED, it was so fast. Before I knew it, it was gone.

Cases like this seem to be relatively rare, but it is an interesting feature that all of these entities have hooves, very much like the devils and imps of lore. What were these things? They certainly don't seem to be anything we can reconcile with an unclassified, undiscovered creature, and they seem to have an ambiance about them that is decidedly more supernatural in nature. So what are they? Demons? Ghosts? Are they perhaps some sort of interdimensional interlopers temporarily crossing over into our reality? There is no way to know at all, and they remain curious enigmas to add to the many, many other reports of anomalous humanoid beasts that populate the realms of cryptozoology and the paranormal.