Taking a Look at Dogs of the Supernatural Kind

In his absolutely definitive book, Explore Phantom Black Dogs, the author and researcher Bob Trubshaw wrote the following: “The folklore of phantom black dogs is known throughout the British Isles. From the Black Shuck of East Anglia to the Mauthe Dhoog of the Isle of Man there are tales of huge spectral hounds ‘darker than the night sky’ with eyes ‘glowing red as burning coals.’” While a number of intriguing theories exist to explain the presence and nature of such spectral-like beasts, certainly the most ominous of all is that they represent some form of precursor to – or instigator of - doom, tragedy, and death.

One of the most infamous of all black-dog encounters in the British Isles occurred at St. Mary’s Church, Bungay, Suffolk, England, on Sunday, August 4, 1577, when an immense and veritable spectral hound from Hell materialized within the church during a powerful thunderstorm and mercilessly tore into the terrified congregation with its huge fangs and razor-sharp claws. In fact, so powerful was the storm that it reportedly killed two men in the belfry as the church tower received an immense lightning bolt that tore through it and shook the building to its ancient foundations. 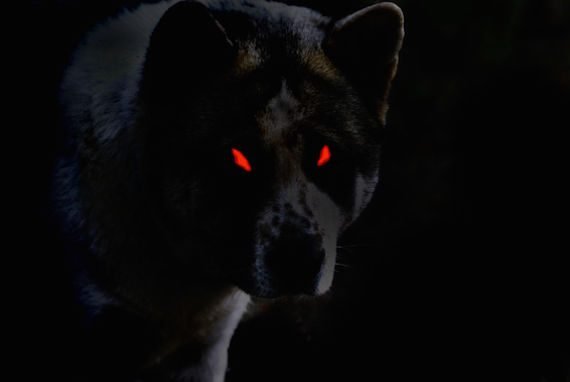 According to an old, local verse: “All down the church in midst of fire, the hellish monster flew. And, passing onward to the quire, he many people slew.” Then, just as suddenly as it had appeared, the beast bounded out of St. Mary’s and was reported shortly thereafter at Blythburgh Church, about twelve miles away, where it allegedly killed and mauled even more people with its immense and bone-crushing jaws – and where, it is said, the scorch marks of the beast’s claws can still be seen to this day, infamously imprinted upon the ancient door of the church. Even more intriguing is the fact that Bungay’s legend of a satanic black hound parallels that of yet another local legend: that of Black Shuck, a giant, spectral dog that haunts the Norfolk and Suffolk coasts. Such is the popularity of the Bungay legend, that it has resulted in an image of the beast being incorporated into the town’s coat of arms – and the Black Dogs is the name of Bungay Town Football Club.

The stark, disturbing and memorable image that the infamous devil dog, or the phantom hound, as described above undoubtedly conjures up is that of a definitively sinister beast that stealthily prowls the towns and villages of ancient England by nothing more than silvery moonlight or to the accompanying background of a violent, crashing thunderstorm. It is, however, a little known fact outside of dedicated students of the phenomenon that sightings of such creatures have also taken place in modern times: in both the 20th and 21st centuries, even, as is evidenced by the following reports from my files.

First, there is the story of the Bradley family of the city of Leeds who had the very deep misfortune to encounter one of the now-familiar hounds of Hell in early 2009: at no less a site than the English city of Lichfield’s famous and historic cathedral; which has the distinction of being the only English cathedral to be adorned with three spires. According to the Bradley’s, while walking around the outside of the cathedral one pleasant Sunday morning, they were startled by the sight of a large black dog racing along at high speed, and adjacent to the side of the cathedral. The jaw-dropping fact that the dog was practically the size of a donkey ensured their attention was caught and held. But that attention was rapidly replaced by overwhelming fear, when the dog allegedly “charged the wall” of the cathedral and summarily vanished right into the brickwork as it did so! Perhaps understandably, the Bradley’s chose not to report their mysterious encounter to cathedral officials, or to the police. 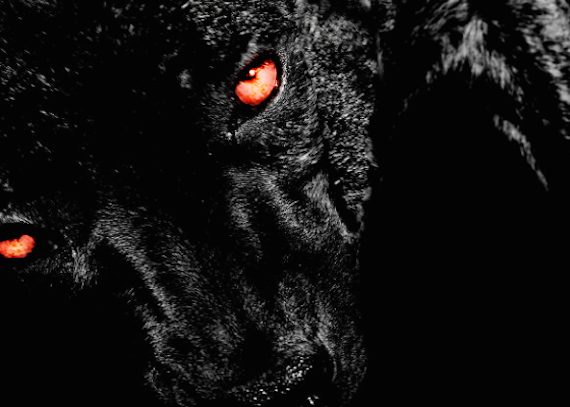 And then we have the account of Marjorie Sanders. Although Sanders’ account can be considered a new one in the sense that it only reached my eyes and ears in August 2009, during which time I was on a week-long return trip to England, it actually occurred back in the closing stages of the Second World War, when the witness was a girl of ten or eleven. At the time, Sanders was living in a small village not too far from England’s Tamworth Castle – which overlooks the River Tame, and which has stood there since it was built by the Normans in the 11th Century; although an earlier, Anglo-Saxon castle is known to have existed on the same site, and which was constructed by the forces of Ethelfreda, the Mercian queen and the eldest daughter of King Alfred the Great of Wessex.

According to Sanders, “probably in about early 1945,” her grandfather had “seen a hell-hound parading around the outside of the castle that scared him half to death when it vanished in front of him.” For reasons that Sanders cannot now remember or comprehend, her grandfather always thereafter memorably referred to the animal in question as “the furnace dog.” Whether or not this is an indication that the spectral dog had the seemingly-ubiquitous fiery red eyes that so many witnesses have reported remains unfortunately unknown; but, it would not at all surprise me if that was one day shown to be the case.

Then, we have the brief, but highly thought-provoking, account of Gerald Clarke, a Glasgow, Scotland baker, whose father claimed to have briefly seen a large, black-colored, phantom hound with bright, electric-blue-colored eyes on the grounds of a military base in central England – called Royal Air Force Stafford – in the late 1950s, and while on patrol late one winter’s evening. As was the case with so many other witnesses to such disturbing entities, the elder Clarke quietly confided in his son that the creature “just vanished: first it was there and then it wasn’t.”