The Bizarre Case of the Witch of Baldoon

Although it is a pleasant expanse of rolling fields today, the area of what is now known as Wallaceburg, Ontario, was once a wild, untamed land, first settled in 1804 by the brave souls who risked their lives to carve out an existence along the rugged wilderness of the Snye River. The small settlement that would become Wallaceburg was called the Baldoon settlement, tucked away in this forbidding realm of harsh winters and perched on the edge of unexplored wilds as far as the eye could see. It was to this fierce place that a farmer named John McDonald and his family came in 1829 from Scotland to try and make a new life for themselves, but their story would go on to become one of the greatest tales of the paranormal in Ontario history, their dream turned to a nightmare.

Almost as soon as the McDonalds moved into to their quaint two-storied frame house they allegedly were approached by an eccentric, family that lived nearby consisting of a creepy old woman and her two sons and daughter, who offered to buy the property on several occasions, but the McDonalds refused, and this was when they began to experience paranormal activity. It started off light, with noises when no one was there, objects moved or misplaced, and the sound of disembodied footsteps, but this all began to accelerate in intensity. Screaming and wailing were heard at night, objects began flying off of shelves, lead bullets or stones would be thrown at people by unseen hands or come shattering through windows, sometimes described as“boring holes in the glass as though shot from a gun but would drop quietly and harmlessly to the floor,” and fires began to break out around the property for inexplicable reasons. John’s son, Neil McDonald would later write of some of this activity:

The dishes of water would rise of their own accord from the table, the tongs and shovel bang against each other on the hearth, the chairs and tables fall over with a loud crash, and even that sober domestic creature, the kettle on the hearth, would toss off its lid, tip over on one side, and suddenly, as if seized by unseen hands, dash itself in a paroxysm of fury on the floor. An Indian knife, with a blade ten inches long, was violently dashed against the window frame and its blade stuck fast in the casement.

This would all graduate to more and more dangerous activity as time went on. Livestock and farm animals seemed to drop dead for no reason, the family’s dog was attacked by some unseen entity and ran off to never return, objects were thrown with increasing ferocity and obvious intent to harm, and the children were targeted more often, even the youngest of them. On one occasion a red hot rock supposedly appeared under the family’s infant child to cause it to scream out, yet when they threw this stone out the window it came sailing back in a moment later and threatened to start a fire. Another time the whole house was said to have been raised right off its foundations only to drop back down again. Many of these strange phenomena were supposedly witnessed by family friends and relatives, and it would all reach a crescendo when one of the mysterious fires razed the entire house to the ground, fortunately not taking any lives with it.

Alive but shaken, the McDonalds moved next door to the home of John’s father, where the activity would start up again right where it left off. The family experimented a little, marking some of the stones that came crashing into the house from the windows and then throwing them into the nearby river, yet the same stones with the same markings would be thrown back dripping wet as if someone had plucked them from the cold water. Authorities were notified by the desperate family, and even these men of the law became targets for these strange forces. One Captain Bennett came to the property to have the bullets of his rifle vanish only to be thrown back it him, and finally for his gun to suddenly explode in his hands, and another lawman spent most of his time at the property putting out fires. Even a priest was brought in to try and perform an exorcism, and a local shaman was approached as well, but this did nothing to help.

In the meantime, the McDonalds took to living in a makeshift tent outside rather than risk endangering those around them. Out of sheer desperation, the family then purportedly trekked through the wilderness to seek the advice of a girl of 15 years of age, who lived there as a hermit with her father and who was said to have vast psychic powers. The mysterious girl told them that they were being cursed by a witch, who happened to be the very old lady who lived next door, the one who had wanted to buy their land. The McDonalds were told to look at their flock of geese and that among them they would find a stray goose with a black head and a single black feather in each wing. This bird, it was said, was the origin of their woes, and that they should shoot it with a silver bullet, which would release them from the nefarious curse. 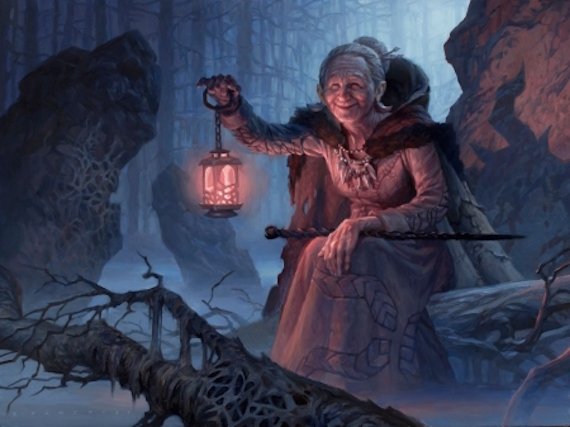 The McDonalds made their journey home and soon found that there indeed was such a goose in their flock just as described. John went about crafting a single silver bullet. Unfortunately, his shot was not dead on, merely injuring the animal, which fled off towards the old woman’s house. The curious farmer chased after the wounded bird, and as he approached the house he saw that old witch sitting upon her porch nursing a wounded arm and shrinking back from the farmer as he approached in obvious fear. The tale goes that the woman’s health then deteriorated rapidly, the silver undoing her magic and sickening her until she was no more, and all paranormal activity supposedly ceased as soon as she let out her last gasp.

It is all a truly spectacular, spellbinding account of adventure, intrigue, and supernatural horror, featuring a colorful cast of shapeshifting witches, a besieged family, psychics, and magical geese, and to this day the story remains popular in Canada, where it is mostly treated as a genuine haunting. However, there has been quite a lot of skepticism aimed at the account as well. One of the problems is that it has been told so many times by so many people, all with their own little variations and versions, that it is very difficult to know what is rea or not. The most “official” source is Neil McDonald’s book on the matter, which was serialized in the in the Wallaceburg newspaper in 1871 and published in print in 1905, long after the actual events supposedly happened. The book is very detailed and fleshed out with 26 eyewitness accounts from the McDonald home, but the problem is that Neil would have been a very young child at the time of the events, so how much veracity can we give any of it?

It has been strongly suspected that at least large portions of the tale and certain story elements were completely fabricated by Neil, based on the folklore and older accounts of strange phenomena in the region, and that he made most of it up, if not all of it. Is that what this all is, tall tales, folklore, and a work of fiction? Is there anything to it at all? Whatever the answers may be, the case of the Witch of Baldoon has gone on to become a pervasive legend, and one of the great Canadian ghost stories.