The Bizarre Curse of the Warlock Giles Corey

There is unfortunately a grim history of the persecution of witches. Especially in the history of the United States they were hunted down, given very little trial or chance to defend themselves, and mercilessly slaughtered, whether they really ever had any magical powers or not. From within this dark history we have the strange case of a man brought to trial as a warlock, who would defy all attempts to break him and supposedly cast a curse on the town that chose to persecute him.

The whole strange tale begins in the town of Salem, Massachusetts, to where in 1659 an immigrant from Northampton, England, by the name of Giles Corey, also spelled “Cory,” moved along with his first wife, Margaret. Although he faced hardship and tragedy in the form of Margaret’s death, he would go on to become a very successful and affluent farmer in the area, and would eventually marry two more times. Despite his success, Corey drew a rather sinister reputation around him, starting with his going to trial for the alleged beating death of one of his farmhands, a man named Jacob Goodale, in 1676. He was accused of losing his temper after finding Goodale stealing apples, and beating the man to death with a stick, but although he was acquitted of the crime and merely fined this reputation for dark violence stuck, and there were many who believed that Corey had simply used his local prominence and money to get out of the rap. Add to this the fact that Corey had wormed his way out of charges of theft in the past, and he had begun to be seen as a rather shady individual, despite his high social standing. It was perhaps this dark reputation that would come back to bite him when the witch panic began to rear its head in Salem. 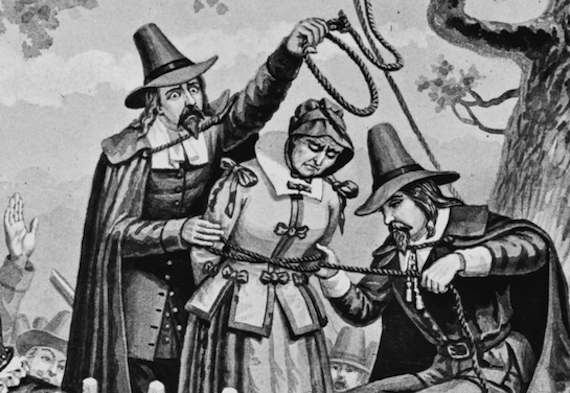 When the notorious Witch Trials of Salem began, Corey was 80 years old and living with his third wife, Martha Rich, and they were both members of the local church, even taking part in the witch pretrials. However, it was not long after the witch hysteria began that in March of 1692, Martha was herself accused of being a witch and brought to trial. Corey himself was shocked, and it seems that he even believed the serious charges at first, even going as far as to testify against Martha, citing several inexplicable instances of illness in his ox and cat, as well as what he claimed was his wife engaging in some sort of strange rituals. He soon changed his tune, but by that time he himself had been targeted for the crime of witchcraft, and was arrested along with suspected witches Mary Warren, Abigail Hobbs, and Bridget Bishop. Corey vehemently denied the allegations, but presiding judges Judge John Hathorne and Judge Jonathan Corwin accused him of lying.

During the trials against them, several members of the audience were found to fall into convulsions or fits, or to mimic the actions of Corey and his wife, leading the court to further cement their ideas that some sort of bewitching was going on. One Reverend Samuel Parris would claim to have witnessed it, and wrote of one court exchange:

All the afflicted were seized now with fits, and troubled with pinches. Then the court ordered his hands to be tied.

Magistrate: What, is it not enough to act witchcraft at other times, but must you do it now in the face of authority?

Corey: I am a poor creature, and cannot help it.  Upon the motion of his head again, they had their heads and necks afflicted.

Magistrate: Why do you tell such wicked lies against witnesses, that heard you speak after this manner, this very morning?

There were many other damning accusations against them. In one case, a local resident named Mercy Lewis gave her own damnation of Corey, saying:

I saw the apparition of Giles Corey come and afflict me urging me to write in his book and so he continued most dreadfully to hurt me by times beating me and almost breaking my back till the day of his examination being the 19th April [1692] and then also during the time of his examination he did afflict and torture me most grievously and also several times since urging me vehemently to write in his book and I verily believe in my heart that Giles Corey is a dreadful wizard for since he had been in prison he or his appearance has come and most grievously tormented me.

Despite Corey’s adamant claims of innocence, none of this looked good for him, and as this was the height of the witch hysteria gripping the region at the time he was seen as using his charms, magic, and deceptions. For his part, Corey began to refuse to speak at all during the trials, afraid of incriminating himself in any way, choosing to stay mute throughout most of it, pleading neither guilty or not guilty. This may have proven to be his undoing, as at the time a refusal to plead was tantamount to admission of guilt, and the go-to method of extracting a plea was torture, which was rather elegantly called peine forte et dure, but which translates to “strong and harsh punishment.” 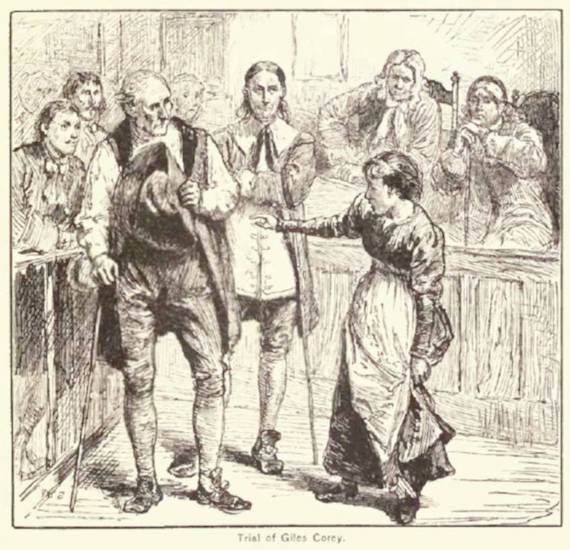 To this end, a Sheriff Corwin was brought in to begin the torture process, which consisted of stripping Corey naked and then gradually placing heavier and heavier stones on top of him upon a wooden plank. This was meant to gradually break the will of the recipient and urge a confession to make the pain stop, but by all accounts Corey was completely defiant, with a passage of Charles Wentworth Upham’s 1867 book Salem Witchcraft saying:

It is said that Corey urged the executioners to increase the weight which was crushing him, that he told them it was of no use to expect him to yield, that there could be but one way of ending the matter, and that they might as well pile on the rocks. Calef says, that, as his body yielded to the pressure, his tongue protruded from his mouth, and an official forced it back with his cane. Some persons now living remember a popular superstition, lingering in the minds of some of the more ignorant class, that Corey’s ghost haunted the grounds where his barbarous deed was done; and that boys, as they sported in the vicinity, were in the habit of singing a ditty beginning thus: ‘More weight! More weight! Giles Corey cried!’

In the meantime, he was excommunicated from the Church, as was his wife, but still he defied the torture attempts even as they were killing him, refusing to yield in any way. This was seen as partly out of pure defiance, but also as a way to prevent his land from falling into the hands of the state and make sure it went to his own children, as it was known for the authorities to swoop down and scoop up the properties of those who plead guilty. During this torture his wife Martha would be hanged with other suspected witches, and after several days of being slowly crushed to death Corey would succumb as well. According to the lore on the matter, just as he died he said with his last breath, “Damn you! I curse you and Salem!” According to the reports, this worked.

Four years after his death, Sheriff Corwin would suddenly drop dead from a heart attack at the age of 30, and other subsequent Sheriffs would also meet with strange accidents and misfortune. In the book “Cursed in New England,” it is written of this purported curse:

About 300 years later, in 1978, Robert Cahill – while in office – suffered a rare blood disease, a heart attack and a stroke. Doctors could not find the cause of his afflictions. He was forced to retire as sheriff of Essex County and as Master and Keeper of the jail. Today he lives in Florida. Mr. Cahill notes that the sheriff before him also contracted a serious blood ailment while in office; it forced him to retire. He, in turn, had inherited the post from his father after the elder man died of a heart attack…while serving as sheriff. The previous sheriff had suffered heart problems as well. ‘So have all the others, as far back as I could trace,’ he says. ‘And the two men who have followed me have had an awful lot of [legal] trouble.’ 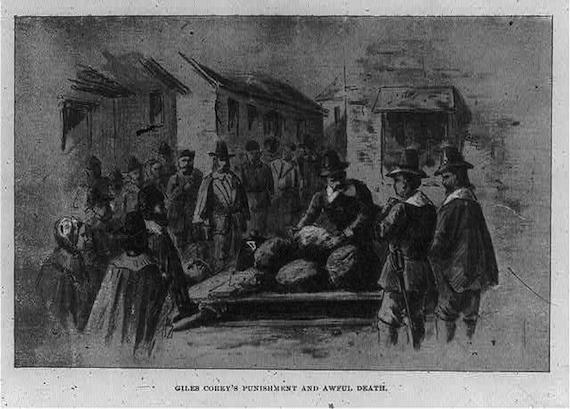 The curse was apparently broken when the Sheriff’s office moved from Salem to Middleton in 1991, with no further incidents. Additionally, as if an ominous curse were not enough, the ghost of Giles Corey is said to still lurk about the area, especially in the vicinity of the Howard Street Cemetery. He apparently will appear as an apparition on the anniversary of his death, as well as just before any sort of tragedy or catastrophe in the town, such as before the Great Salem Fire of 1914. With all of the spooky talk of curses and hauntings, just about the only good news to come out of all of this is that Corey had remained in possession of his land, and the gruesome circumstances of his death would go on to cause the residents of Salem to reconsider their support of the witch trials sweeping the region. Interestingly, Corey himself would eventually be posthumously absolved of his charges in 1712, although his wife Martha was still considered a witch, and is to this day.

In modern times, a memorial marker for Giles Corey can be found at the Salem Witch Trials Memorial in Salem, which you can visit if you are so inclined. Was he really guilty? What was it that brought him to bear that horrific death without confessing? Is there anything to his curse or ghostly appearances? The case of Giles Corey and his insidious curse remains an intriguing historical oddity that gives us a glimpse into the days of witches, and the life of a very mysterious man indeed.