The Bizarre Vanishing of Devin Williams

Our case begins in 1995, with a 29-year-old truck driver by the name of Devin Williams, who lived with his beloved wife and three children in Emporia, Kansas. By all accounts he was a loving husband and father, as well as a dedicated, hard worker, so in May of that year there was no way any one could have suspected the strange series of events that would play out. On May 23, Williams kissed his family good bye and headed out towards California to deliver a shipment, picking up a load of lettuce for the return trip. Although it was a route he had taken many times before, he would never make it home, and leave behind a baffling mystery that has not been solved.

Fast forward to May 28, Memorial Day Weekend in the United States, and in the Tonto National Forest, near Kingman, Arizona and far from the truck driver’s route, families had flocked in to enjoy the pleasant weather, camping, and other outdoor activities. It would have been a picture perfect day if it weren’t for Devin’s massive 10-ton, 18-wheeler semi-truck, which suddenly appeared out of nowhere to go barreling through a campground to send people running and scattering in a panic trying to seek cover. It would have been a terrifying sight, with two people nearly run over in the incident, and some witnesses described the eerie trance-like state the driver seemed to be in. One camper, Lynn Yarrington, would say of this:

There was no expression on his face at all. He didn’t attempt to slow down or look over to see if they needed help or anything, he just kept on going.

The truck careened away to roar off down the narrow campground road out of sight, and the next time anyone saw it would be stalled in a field surrounded by woods some distance away, when two hikers stumbled upon it and a seemingly dazed and confused Williams. As the hikers wondered what to do, Williams allegedly said to them “They made me do it. I'm going to jail.” One of the witnesses to this, a Charles Hall, felt it was all rather bizarre, and imagined that some sort of suspicious activity was going on, and he describes the strange scenario:

I envisioned a hostage situation, a hijacking, kidnapping, whatever. A jail break, maybe, and someone had a gun on someone in the cab. He made no effort to keep us there, no effort to ask for help, do anything for him.

Authorities were notified, but when they arrived the truck driver was nowhere to be seen. Considering the testimony of the hikers it was thought that some sort of foul play was going on, but the inside of the truck was found to be clean and well-cared for, with no sign of any struggle. Williams had left behind his briefcase, nothing seemed to be missing, and the cargo was completely intact. The truck was found to have definitely been that of Williams, and no one could figure out what had possessed him to make a detour to Arizona off the highway to go rampaging through a crowded campground he had never been to before, only to drive out into the forest and abandon his truck and cargo. What was going on here? No one knew, and we still don't.

Things would get weirder when the following day two campers driving through came upon the missing Williams, who they described as walking along in a sort of trance talking to himself. When they pulled over to ask if he needed help, Williams bizarrely just said “I gotta light the grill,” and proceeded to take a rock and strike a $20 bill he was holding in his hand with it. It was quite an outlandish thing to see, and an odd sight to watch this man banging his rock against the bill almost as if trying to start a fire. What was he doing? What was the “grill” he was talking about lighting? What was wrong with him? They were not able to find out, because Williams then suddenly threw the rock at their car and they decided to drive off, thinking that the man was insane. This is the last time anyone would see Williams alive. 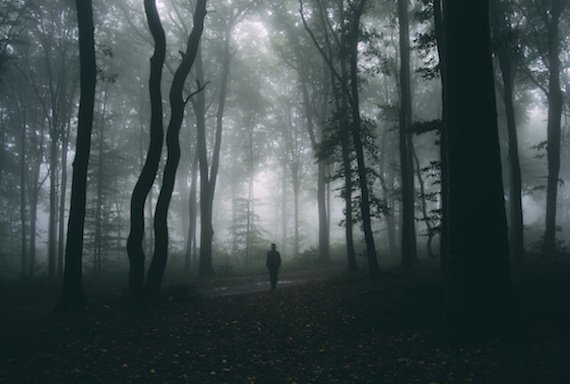 Williams seemed to have just stepped off the earth after that, and extensive searches turned up absolutely nothing, leaving authorities trying to find answers, but there wasn’t much to go on. He was a devoted family man and hard worker with nothing at all in his record to show that he would want to try and mow down innocent people or abandon the truck, nor was there any history of mental problems to explain his bizarre behavior and statements. According to Williams’ boss he had seemed totally normal before his trip to California, with nothing to indicate that anything was awry. The only slightly strange clue was that it was found that shortly before his disappearance Williams had called his boss to say that he was having trouble sleeping, but it is unknown if this has any relevance to the case at all. In the end there was no clear answer or clue for why he had turned up in Arizona miles from his route and nowhere near the highway to do what he did and then vanish into thin air.

In the absence of any real evidence all kinds of theories swirled about what had happened to Devin Williams. One was that he indeed had been kidnapped and that he had been forced to do what he did at gunpoint, but who would do this and why? What was the motive? Williams didn’t have any known enemies, and why would someone abduct a truck driver just to have them go streaming through a campground in the middle of nowhere and then disappear into thin air to abandon the truck? There was the idea that Williams had voluntarily left his life behind, but he loved his family dearly and had just bought a new house, so why would he do this? Also, how does that explain his very bizarre behavior? It has been suggested that he may have been on drugs, but he had no record of this at all. Another idea is that he had diabetes and had suffered some sort of episode, but this seems to do little to pull all of the disparate weird clues together. There were even more fringe ideas that he had been abducted or mind-controlled by a UFO, as there was apparently a UFO sightings flap in the area at the time.

Whatever the cause was there was no sign at all of where he had actually gone off to and no trace of his fate until May 2, 1997, when a human skull was found just a quarter of a mile from where Williams had last been seen. Authorities were able to determine that the skull was that of the missing trucker, but considering that there was no trauma or injury found on it, it was impossible to know how he had died. The proximity of the skull to where he had disappeared was also a conundrum, as the area had been searched quite extensively in the days after the vanishing, and far from some remote wilderness this was a very popular outdoor recreation area visited by scores of people, so how had he managed to evade all of these people to die there alone and then have his remains decompose to leave a skull two years later without anyone noticing? Was he killed somewhere else and then dumped there much later? It doesn’t make sense, none of it does. There has been no real theory that neatly ties it all together and it all remains an enigma. What happened to Devin William? We may never know.