The Eerie Unsolved Case of the Wyrick House

Out in rural Georgia, in the United States, and in the small rural town called Ellerslie, is a quaint, quiet area within sits a modest one-story brick house. It is by all appearances a rather nondescript little home, and other than the peaceful serenity of the surroundings there isn’t much to see here, and one might typically just pass it right on by. However, it was here where starting from 1989 a strange tale of the paranormal would begin to unfold, which would change an entire family’s life and which has permeated the property and tormented them right up into the present day.

The story begins with a young couple, Andrew and Lisa Wyrick, who were excited to have just purchased their first home, and they moved in with their young daughter Heidi with excitement for the future. At first it was like a dream come true, and although the three-bedroom home was modest it was their first step towards a new life and the first place they could call their own. At first things couldn’t have been better, and it was everything they had hoped for, but then some strange incidents began to unfold, starting with Heidi claiming that there was a kindly elderly man with long gray hair and wearing a suit, tie, and “shiny black shoes,” who would come onto the property and talk to her. She said that the man’s name was Gordy, and that he would talk to her and tell her stories, as well as sit on the swings outside and even hold her hand. This was a little disturbing to the parents, and the thought of a creepy old man coming to talk to their daughter unsettled them, despite the fact that their daughter said he was very friendly and not at all menacing. They kept an eye on her and noticed that she would sit outside talking to herself, so after no old man materialized under their watch they sort of chalked it up to a child’s imagination, thinking “Gordy” was just an imaginary friend. Heidi’s mother would later say:

I would see her out in the yard, and see her hand raised, holding someone's hand.  Many times I would hear her talking, but never heard anybody talk back.

Even though her parents did not think Gordy was an actual person, to Heidi he was very real, and she insisted that he really did come to her, and would hold her hand and take walks with her. As eerie as this was, there would be other phantom visitors to the young girl, and some of these were a bit spookier than a lurking old man. The next one who came to Heidi was a man who called himself “Con,” and who appeared at the front door one day wearing a white t-shirt covered with blood and sporting an injured, bandaged hand. She went to tell he father about the strange visitor, but when he came to the door “Con” was gone. Nevertheless, he was convinced that the man had tried to abduct his daughter and he searched the entire neighborhood for a man in a bloody t-shirt but found no one. Indeed, no one had seen anyone of the sort, but the family remained on high vigilance.

It came to pass that Lisa Wyrick would mention these incidents to her sister, who happened to live nearby, and this is where things would become even more bizarre still. Lisa’s sister showed surprise when the name “Gordy” was mentioned, as the house where the Wyricks lived had in fact once been owned by a elderly man named James S. Gordy, who it was found had died in 1974 and exactly matched Heidi’s description. It was quite a shock, because there is no way their young daughter could have possibly known about the previous owner, so how could she have seen him unless he was a ghost? As for the other man, “Con,” the two did a little digging into the history of the house and found that the house next door had once belonged to a Catherine Ledford, who had had an uncle named Lon “Con” Batchelor, who had once mauled his hand in a cotton gin accident and who had died of cancer in 1957. They managed to contact Ledford, who was still alive, and procured some family pictures to show to Heidi, who immediately picked out Con as the man she had seen at the front door.

In the meantime, Heidi continued to claim that she would see other mysterious figures and even animals wandering about the property, and considering the strange circumstances of her sightings of Gordy and Con the parents were becoming convinced that these were no mere imaginary friends, but that she could actually see spirits. This notion was strengthened when they had the parapsychologist Dr. William Roll come to investigate the home. Roll was able to dig up some photos of the man Gordy, and when these photos were mixed with some others Heidi was able to immediately correctly point out the man she claimed she had seen on the property. After talking extensively with the family, Roll became convinced that the girl was indeed seeing spirits, and he would say of it:

She came up with physical descriptions and with names that she apparently could not have obtained in any ordinary way.  So that immediately made me interested in the case.  A couple of pictures had been found of Mister Gordy. The hope was that Heidi would be able to identify Mister Gordy’s picture if they were presented to her with a number of other photographs. Having spoken to Heidi and her parents, I'm even more convinced that we are dealing with genuine para-psychological experiences. Then the question comes up, why are these things happening to this little girl?

It was a little scary for the family, however, at first these spirits did not seem particularly malevolent or out to do them harm, and Heidi never expressed any fear of seeing them, but this would change when Lisa became pregnant with their second child. It was a situation that seemed to have drawn in something decidedly more insidious and sinister, starting with the appearance of a shadowy figure with no features lurking in the hallway that instilled hysterical fear and panic in Heidi. Shortly after this the paranormal activity in the home escalated into full blown poltergeist activity, with objects moving or flung across the room and inexplicable sounds, and this graduated to actual physical attacks, mostly aimed at Heidi’s father. The family thought about moving to get away from the obviously very angry entity, but they decided that it would likely follow them wherever they went. 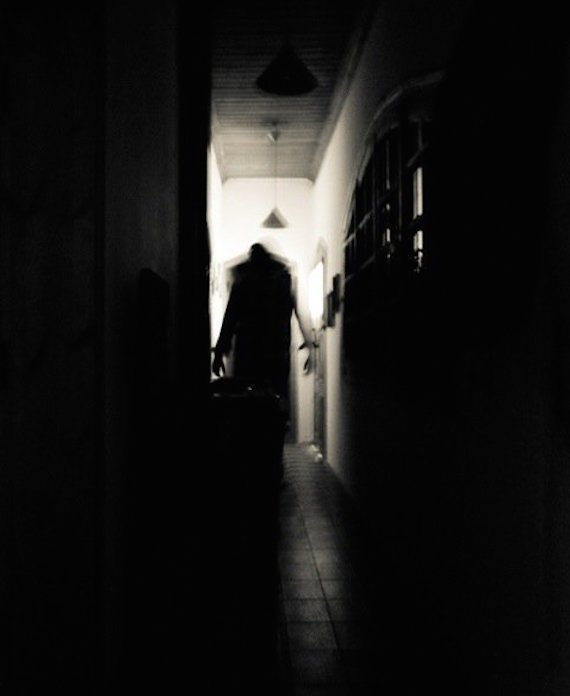 This frightening activity would only get more intense when Heidi’s sister, Jordan, was born. One morning they awoke to find some scratches on the Heidi’s face, and on another occasion Andrew Wyrick would claim that he had woken up to find three deep gashes on his side. This was enough to convince them to move to a new home, but just as they had expected the malicious presence followed them and continued its attacks. According to the family, the entity once picked Heidi up by the feet and lifted her completely off the ground, and this activity would stay with her into adulthood. Her story managed to hit the news over the years, and became the focus of a Discovery Channel documentary called A Haunting in Georgia, as well as an episode of Unsolved Mysteries and a book called A Haunting. Heidi, now an adult with children of her own, claims she still regularly sees spirits of all forms, including the dark entity, and says of her ability:

I can sense when it’s an evil presence or if it’s a good presence. If I sense evil, you wouldn’t believe the feelings you can get...I’ve been literally been sick to my stomach. Most of the time, I've learned to keep a lot of it to myself, and I really don't even notice it. You get used to seeing things after a while. Everyday, everyday, I wish these things wouldn't have happened because my life would be so much different...I wouldn't be known for something like this.

It has been debated as to what occurred here with this family. Was this ghosts and perhaps something even more demonic, somehow drawn to Heidi Wyrick, and if so, why? Did she simply have some gift for seeing dead people and spirits? What about the poltergeist activity and attacks? Was this from some supernatural entity or perhaps even Heidi's own mind lashing out with some pent up supernatural power? Why is it that this activity would follow around this one family and remain tethered to Heidi well into adulthood? There is no real way to know, and the bizarre case of the Wyrick house continues to be much talked about and debated to this day.