The Federal Bureau of Investigation has released its files on another famous name in the annals of ufology: George Van Tassel, alleged UFO contactee, and builder of California's famous Integratron.

Van Tassel was like many in the 1950s UFO scene, who prior to his interest in visitations by "Space Brothers" had been heavily involved with metaphysical subjects and groups. What set him apart from many others, however, was Van Tassel's legitimate involvement with mechanical engineering and aviation. Van Tassel was barely out of his teens when he relocated to California from his hometown in Jefferson, Ohio, to work in a garage owned by his uncle.

It was while working there that he met a German immigrant and part-time prospector named Frank Critzer. Staking his claim near Giant Rock, California, Critzer was later killed during a police raid that occurred at the location in 1942; it was later revealed that Critzer had been a suspected German spy.

After Critzer died, Van Tassell took an interest in an abandoned airport near Giant Rock and was later granted a contract by the Federal Government to undertake a restoration of the property under the Bureau of Land Management. With his background in mechanical engineering and prospective airstrip near Giant Rock, Van Tassel went on to work for some of the more high profile names in aviation during the ensuing years; these included Lockheed, and flight innovator Howard Hughes' own Hughes Aircraft, among others. Eventually, Van Tassel would also turn his airport and surrounding attractions near Giant Rock into a sort of "Mecca" for the soon-to-be-booming flying saucer craze.

The FBI's file on Van Tassel, numbering 315 pages, is mostly concerned with photocopies of pamphlets Van Tassel co-authored, which includes one titled, "Proceedings from the College of Universal Wisdom" (Van Tassel was Director of the College of Universal Wisdom in the early 1950s, according to the pamphlet). The batch of documents opens with a letter by an individual (whose identity is redacted) sent to John F. Malone, the Special Agent in Charge at the FBI's Los Angeles, California field office. The letter explains that the author is filing the information with Malone "at the request of my friend" (a name that is also redacted), who had been "Seeking some information concerning the activities of individuals and the group known as the College of Universal Wisdom." 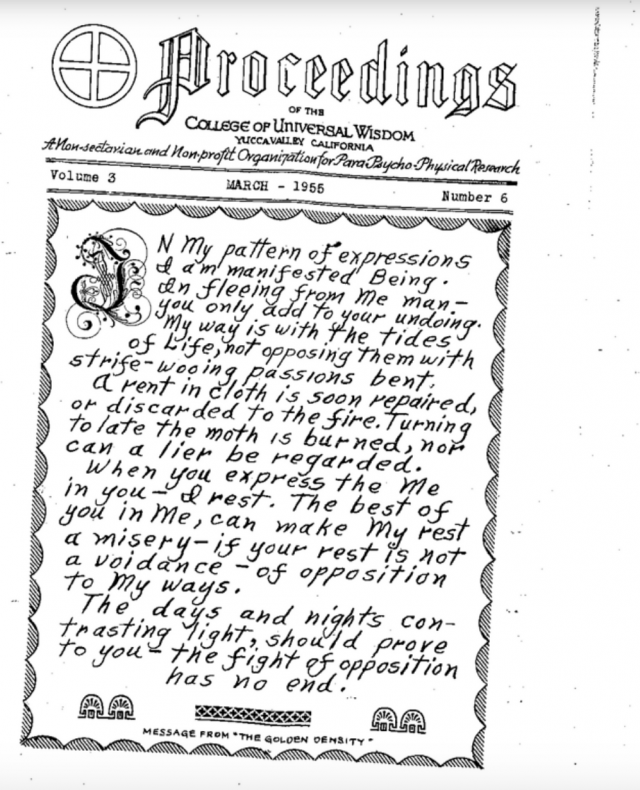 "The group ostensibly is devoted to a study of space ships and interplanetary communication," the unnamed individual writes, "but its consistent 'line' in its publication is an attack upon atomic weapons and preaching of a nebulous peace. George W. Van Tassel is listed as Director of the College of Universal Wisdom, and I know nothing whatever concerning him.

"However, at least one of the prominent guests at the space ship convention at Giant Rock Airport, Sunday, April 4th, has been questioned about supposed communist affiliations," the informant writes.

However, in addition to Van Tassel's associations with the Giant Rock area and his organization, the files do elaborate on the Bureau's concerns about Van Tassel's airstrip, and the location's former connections to a possible German spy during the war.

"You may recall that this area was the scene of some sensational happenings during World War II," the author of the letter to Special Agent Malone writes, "when it was believed to be the projected site for refueling of suicide planes, possibly to be launched from Japanese submarines on the Gulf of California in an attempt to reach and bomb Hoover Dam's penstocks and power houses to cripple the airplane industry here. Your office no doubt has the full story on what happened then including the destruction by dynamite in an underground room beneath Giant Rock of the then owner."

Incidentally, Van Tassel and his family actually lived in quarters within these areas excavated by Critzer in the 1940s, and beginning in 1953, he began holding public meditation events in these underground chambers. The same year was the launch of the annual Giant Rock Spacecraft Convention, as referenced in the letter to Special Agent John Malone, which ran until Van Tassel's death in 1978.

In addition to his "contactee" claims of meeting Space Brothers who granted him knowledge of fountain of youth-style rejuvination, Van Tassel is perhaps best known for building the Integratron, a peculiar, dome-shaped building described as being a "uniquely resonant tabernacle and energy machine sited on a powerful geomagnetic vortex in the magical Mojave Desert."

According to its website, "The Integratron is located in Landers, California, 20 miles north of Joshua Tree National Park. Its creator, George Van Tassel (1910-1978), claimed that the structure is based on the design of Moses’ Tabernacle, the writings of Nikola Tesla and telepathic directions from extraterrestrials. This one-of-a-kind 38-foot high, 55-foot diameter, all wood dome was designed to be an electrostatic generator for the purpose of rejuvenation and time travel."

However, as is made evident in the FBI's file on Van Tassel, the Bureau's concern with him had less to do with claims of meeting "Space Brothers," and everything to do with whether his College of Universal Wisdom had been a front for a Communist Party fundraising apparatus.

A report dated August 4, 1954, outlined the Bureau's apparent fears in this regard as follows:

"The Saucer groups appear to be another means of raising funds for the Communist Party. When chosen b the Communist screening group, members would be given further indoctrination. A very conceivable place to clear them would be through such a place as Giant Rock Airport, located approximately fifteen miles NW of Joshua Tree, California.

"The Giant Rock group, which now has under construction a so-called "College of Universal Wisdom" to be located at Giant Rock Airport, is in my opinion teaching and advocating the overthrow of the U. S. Government by publishing literature which subtly aids in Communist indoctrination, and could provide a substantial amount of revenue as a fund raising "front" group for the Communist Party."

"The Saucer angle is undertoned in the Giant Rock literature in order to carry along any right-thinking people," the report concludes, "apparently to obtain additional funds from them."

Apparently even that far back the FBI thought little of the idea of "flying saucers," and advised that "right-thinking people" might be turned off by Van Tassel's Space Brother escapades. The entire file can be read at the FBI's "The Vault" online reading room here.

Finally, those  interested in Van Tassel may enjoy the  1964 interview below, from a program called "The Extraordinary Equation of George Van Tassel", courtesy of KVOS Channel 12 Films, Center for Pacific Northwestern Studies, Western Washington University:

Dark Matter May Have Existed Before the Big Bang