Some people are for whatever reasons cursed with an inability to have children that they desperately want. A whole industry has been built up on fertility treatments for those who remain childless despite wanting to have a family, and since time unremembered rather than medicine there were long various fertility rites, rituals and spells used to overcome this difficulty. One such example of these magical fertility methods can be found among the numerous oddities on display at various Ripley's Believe it or Not! museums, and it seems that if one wants to really have kids they need look no further.

One of the weirdest and unsolved items on exhibition at Ripley's so-called "Odditoriums," is that of what are simply called the “Fertility Statues." The mysterious statues themselves originate from the Baulé tribe of the African nation of Cote D’Ivoire, and are thought to have been made sometime in the 1930s. The two statues depict a man and a woman and are very primitive in appearance, standing around 5 feet in height, weighing 70 pounds each, and carved with simple tools from whole solid blocks of ebony wood. These statues are said to be imbued with the power to grant potent fertility upon women, with the two statues to be placed on each side of the entrance to a room facing each other, and according to accounts they actually work.

The fertility statues might have remained an unknown oddity lost to the world if Edward Muier, of the Ripley's Believe It or Not! museum had not made a trip to Cote D’Ivoire on an excursion to procure rare, unusual, and odd artifacts. There at a small curio shop tucked away within a bazaar he found the statues, with the shop owner informing him that they had been blessed by a shaman to give them their fertility powers, and that if a woman were to touch one they would soon become pregnant. At the time Muier didn’t believe any of this mumbo-jumbo, but thought they were just perfect for a decoration, so he purchased them and brought them back to Orlando, Florida, almost as a joke, promptly placing them prominently in a doorway of the corporate offices. However, it would soon turn out that these were no joke at all.

The mystery started when a receptionist at the office, who often had to pass the statues and sat practically right next to them, promptly got pregnant as soon as they were installed. This was seen as almost comical considering the mystical powers the statues were supposed to have, and the receptionist was teased about it, but the weirdness would only continue. Shortly after this, an accounting clerk named Kimberly Martin also fell pregnant, even though she had not been planning to have kids and had actually tried to mostly stay away from the statues. However, one day she accidentally touched one and was pregnant soon after. She would say of her experience:

I had just recently gotten married, so my husband and I had made the decision that we didn’t want to start a family for about three or four years. Once I was told the history of the statues, I had made the decision myself that I wanted to stay as far away from them as possible. I was walking down the hall and I tripped along the base of the female statue, looked down and my hand was resting on it. Thought at the time that the damage had been done. Couldn’t do anything about it then, so I just went on about my business. A month and a half later, I found out I was pregnant. I should not have gotten pregnant. Definitely, I was practicing birth control at the time. That was definitely a surprise, but it was a wonderful surprise.

The strange phenomenon continued on after this, with 13 women in the offices getting pregnant within 13 months, and word about their purported powers got out, with people who wanted children writing postcards to the offices begging to be allowed to touch them. It was decided to put the statues on display in the museum, where they would soon be whisked off on a 3-year world tour, the whole time being open to be touched by whoever wanted to and holding a sign that reads:

In the African Baga culture, Queen Nimba represents the ideal fertile woman, so at harvest time and wedding ceremonies, the Nimba statues are called upon to inspire fertility in both the crops and the newlyweds. Legend has it, that contact with the Nimba statue dramatically increases the odds of pregnancy. Touch at your own risk! 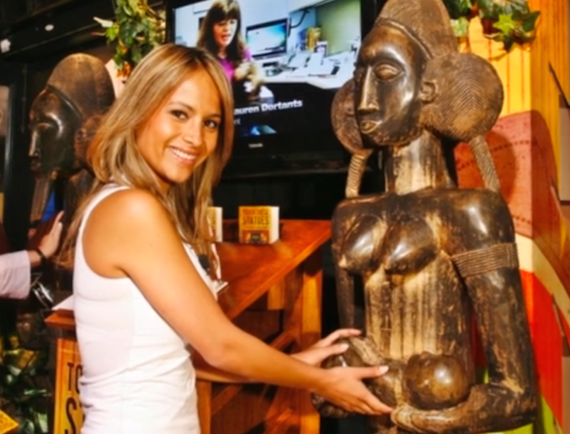 Of course many people did touch them, and Ripley’s began getting piles of mail from thousands of visitors who claimed that they had gotten pregnant after touching the statues, many of them people who had been told they could never conceive. The fertility statues quickly became one of the most popular attractions the museum had ever had, and they actually went about procuring two more of them from Cote D’Ivoire in order to meet the demand. As to whether they really work or not, opinions are divided. Some think that it is just a sort of placebo effect mixed with coincidence and confirmation bias, meaning that only the people who got pregnant come forward and the thousands of other people who did not get pregnant from touching the statues are not considered, skewing perceptions. Yet others believe that the enigmatic statues really work and swear by them. As far as experts are concerned, though, this is all just folklore and superstition. Dr. William E. Gibbons, president of the American Society of Reproductive Medicine has said of them:

From our present understanding of the biology of reproduction, there are would be little to suggest that there is a basis for these objects having an effect on fertility. But, even today there are beliefs or opinions about behaviors concerning fertility that are deeply held that are culturally, not medically based and exist on the internet or incorporate medical 'opinion'.

Interestingly, Ripley’s also houses some other fertility items, such as the Mendes girl's initiation mask, which is worn to supposedly keeps a teenage girl’s fertility intact as she undergoes ritual genital mutilation to mark her adulthood, as well as a 7-foot tall Ciwara fertility statue from the Mali culture of West Africa, although these are off-limits and cannot be touched. The world-famous fertility statues have been featured on such well-known TV shows on the unexplained as In Search of and Unsolved Mysteries, And whether they work or not they draw in thousands of curiosity seekers and would-be parents every year. When asked what he thinks of the statues’ powers, Edward Muier himself has said:

I think you’ll find if you talk to any one of those people, you’ll find that they believe these statues had something to do with their pregnancy. Maybe that’s the power of suggestion, but it’s their power. They believe.

Is that all this is, just strong belief, suggestion, and folklore? Or is there anything more to this? Why is it that so many people swear up and down that the power of these statues worked? Is there any explanation to be had? Whatever the case may be, the fertility statues of Ripley's still remain one of their biggest draws, and although they are normally on permanent display at the Ripley's museum in Orlando, they are often on tour due to their popularity. However, if you really want children and can track them down, it looks like something worth trying out.

Face of an 18th Century Vampire to be Recreated in 3D