The Strange Tale of the Gorbals Vampire of Glasgow

Located just next to the city center of Glasgow, Scotland, is an area known as the Gorbals, once a small village right there on the street, but which in later years came to be known as an overcrowded slum. In the 1950s this was a grimy, smoggy place that had been heavily impacted by pollution caused by its proximity to all of the factories that had been churning out weapons and steel for Word War II, and living conditions at the time were rough, with overstuffed filthy housing projects with flimsy construction, poor sewage facilities and more often than not no running water. It was in this climate of stench, squalor and poverty in a city still reeling from the war and wreathed in the smoke of the nearby steelworks that a new threat would creep out from the rat infested gloom to terrorize the populace and spawn a tale of darkened haunted cemeteries, a spooky town, and metal-toothed vampires.

In September of 1954 rumors began to circulate around the area that two children had gone missing to never be seen again, but there were some who would claim that they knew what had taken them, and that it lived in a large cemetery just outside of the city limits that was called the Gorbals Necropolis or by its more sinister nickname “The City of the Dead.” According to these stories there was a vampire living in the cemetery, and a rather terrifying one at that, standing 7-feet tall, with glowing eyes and most spectacularly sharpened fangs made of iron. Many children began reporting that they had seen the ghoul for themselves, and soon there were numerous sightings of what would be called “The Gorbals Vampire” lurking in the Necropolis shambling about to feed on the unsuspecting.

At the time, authorities tried to calm the populace by stating that there had been no boys reported missing at all and that there was no fiendish vampire stalking the cemetery, and the school headmaster denounced it all as nonsense, but by that time the rumor had taken on a life of its own, especially among the area’s children and young adults. The rumors flew, whispered amongst the believers, until most kids had either seen the vampire themselves or knew someone who had, and the Gorbals Vampire was even said to have an evil witch for a companion.

Rather amazingly, rather than just cowering in their rooms in fear and hiding from the vile creature, the children of the Gorbals began to formulate a plan to actually hunt it down and kill it. To this end they began sending messages and notes to their friends and friends of friends, amassing a group of would-be vampire hunters who went about fashioning weapons such as stakes and preparing to actually get together to storm the Necropolis to launch a full scale assault on the insidious vampire they were sure they would find there. On September 23, 1954, hundreds of kids aged 4 to 14 with their makeshift weapons, knives and even dogs converged on the cemetery and the scene turned into absolute chaos. The children poured into the Necropolis roaming about the graves or perching up on the cemetery walls on the lookout for the beast. One witness to it all, a Ronnie Sanderson, says he was 8 years old at the time, and describes the storming of Gorbal’s City of the Dead:

It all started in the playground - the word was there was a vampire and everyone was going to head out there after school. At three o’clock the school emptied and everyone made a beeline for it. We sat there for ages on the wall waiting and waiting. I wouldn’t go in because it was a bit scary for me. I think somebody saw someone wandering about and the cry went up: ‘There’s the vampire!’ That was it - that was the word to get off that wall quick and get away from it. I just remember scampering home to my mother: ‘What’s the matter with you?’ ‘I’ve seen a vampire!’ and I got a clout round the ear for my trouble. I didn’t really know what a vampire was.

Making it all even eerier was that the nearby steelworks was belching flames, which cast a red hue onto the fog and produced an unnerving atmosphere and flickering shadows that danced about, as well as producing relentless cacophony of clanking metal. It all further cranked up the tension and terror, and when police showed up to the bizarre scene of this mob of armed children hunting down a vampire they were unable to get them to leave. In fact, many of the children even pleaded with the police to help them find the nefarious vampire, and it was all surreal to say the least. It was only when it began to pour down rain that the crowd would disperse, but even then the vampire hunters returned to the cemetery for the next two nights, never finding their quarry. 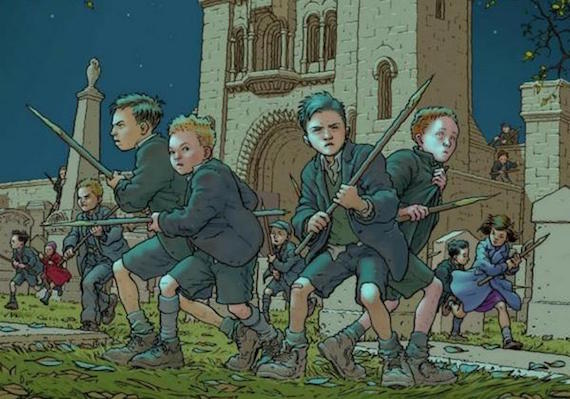 The bizarre incident swept through the news at the time, until before long it was making headlines all over the world. Of course not many adults believed there was an actual vampire with teeth made of iron in the Gorbals Necropolis, but what had caused these kids to just suddenly lose their minds and gang up to storm the cemetery? One of the main ideas is that these kids had been swept up in a sort of mass hysteria fueled by popular American horror comics of the day, such as Tales From The Crypt, The Vault of Horror, and in particular Dark Mysteries, which actually featured one issue that had an actual vampire with iron teeth. At the time parents and city officials were so certain that these lurid and terrifying comic books were to blame that they went about trying to ban the sale of American comics, and in 1955 the Children and Young Persons (Harmful Publications) Act was passed, which limits how graphic reading material for youngsters can be and is still in effect to this day.

While this seems to be the easiest explanation, and no doubt such comic stories likely had some part to play in the mayhem, some of the “vampire hunters” would later insist that they had never even seen an American comic book. It has also been suggested that a large part of it could have to do with the incredible potency of a child’s imagination and their ability to make the images in their head “real” in a sense. These kids had grown up hanging out at the spooky old Necropolis, one of the only slashes of green and open space in the entire city, but also a gloomy place of death, pervaded by the stench of Sulfur, and perpetually cloaked in smoke and fog, all overlaid with a chorus of banging metal and flames spewing out of the steelworks. This might have caused the kids to sort of create their own legend in their minds, a sort of urban myth born from dark fantasies that in their imaginations became all too real for them. Fortean researcher Geoff Holder has explained his thoughts on this, saying:

Perhaps young children live in a world of magical realism, where strange and wondrous things can intrude into the ordinary everyday world without causing cognitive dissonance … bizarre events can be seen as normal as children have not yet learned the ‘common sense’ limits of normality. Groups of children, swept up by an intoxicating and fluid wave of exciting rumours, gathered together and engaged in a communal activity to hunt down the monster. It was enjoyable … but they weren’t playing at monster hunting, they were monster hunting. 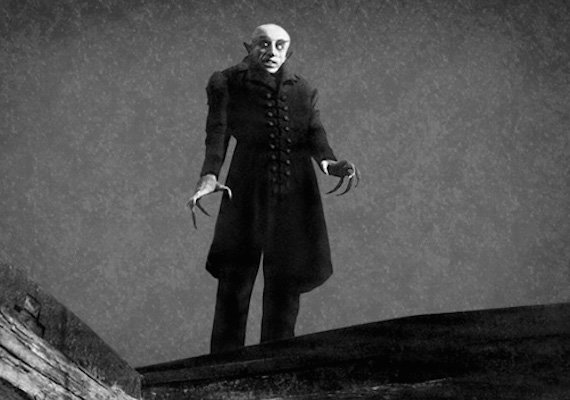 There are other sources that could have influenced the children’s imaginations as well, such as scary folklore and legends or even the Bible, and this perhaps all mixed together with the ominous atmosphere of the Necropolis to create a perfect recipe for mass hysteria. In the end, it is probably combination of things that led to the creation of the Gorbals Vampire, which author David Castleton explains quite well, saying:

The Gorbals Vampire seems to have arisen from a mix of ingredients – a spooky and much-frequented cemetery; the stresses caused by overcrowding, poverty and industrial pollution; and earlier legends of similar demons, which could easily be conjured back to life in such surroundings.

Whatever the underlying cause for it all was, interestingly some of the witnesses of the vampire continued to insist it was real and that they had actually seen it long after this all blew over, and there were kids who said that they had known the children who had gone missing to be presumably devoured by it. In the end it is certainly a bizarre case, with the idea of a mob of armed kids refusing to back down and storm a cemetery looking to confront an iron-toothed vampire a fascinating and very outlandish one. However it all came about, the tale of the Gorbals Vampire is an intriguing look into myths, monsters, and the human mind, and it is a remarkable historical oddity.