If you see the words “US military,” “secret urban tunnels,” "underground experimentation" and “urgent need” in the same sentence, it can’t be good news. If you see them in a tweet that links to an actual government website soliciting actual requests for proposals to satisfy those needs, it may be time to worry. If they emphasize that they need them “right away,” is it time to book the next flight to New Zealand? Or Mars?

That’s the ‘take us to your tunnels’ tweet posted on August 28, 2019 – just two days before they’re urgently needed – by the Defense Advanced Research Projects Agency (DARPA), the agency of the US Department of Defense responsible for the development of emerging technologies for use by the military. The link takes you to FedBizOps.gov, the Federal Business Opportunities website where private contractors can learn about open government projects. While it seems hard to believe that DARPA would be so public with its urgent needs, perhaps that’s part of the plan – make part of the project public so no one gets suspicious. Too late for that! 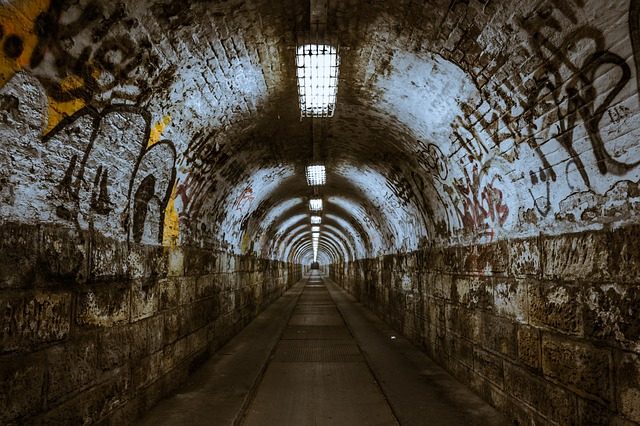 The ideal space would be a human-made underground environment spanning several city blocks w/ complex layout & multiple stories, including atriums, tunnels & stairwells. Spaces that are currently closed off from pedestrians or can be temporarily used for testing are of interest.

Testing? Testing what? The comments on the tweets give plenty of ideas from the ridiculous to the downright scary. They also point out that there are PLENTY of vast unused or unfinished tunnels and spaces around the country that were once planned for subways, cars, pedestrians, shopping malls and other innocent but underfunded purposes that had to be closed down before they could be completed and opened.

The subterranean domain – whether human-made tunnels, urban underground infrastructure, or natural cave networks – is becoming increasingly relevant for global security and disaster-related search and rescue missions As such, DARPA is interested in understanding the state-of-the-art in innovative technologies that have the potential to disruptively and positively impact how the underground domain is leveraged without prohibitive cost and risk to human lives.

DARPA is interested in understanding the state-of-the-art in innovative technologies that may enable future solutions to rapidly map, navigate, and search unknown complex subterranean environments to locate objects of interest. To support these technologies, DARPA is looking to find locations that researchers can utilize to experiment and enhance their innovative approaches.

The short explanatory document doesn’t really explain much. While it claims the project has a noble cause – training for “global security and disaster-related search and rescue missions” – it also wants to learn how to “rapidly map, navigate, and search unknown complex subterranean environments to locate objects of interest.” Whose tunnels are they planning to find and what “objects” are they interested in? Have they found the secret underground location of the Ark of the Covenant? The hiding place of the long-rumored-not-to-be-dead Elvis? A time machine? Putin’s mini-nukes? Anybody’s mini-nukes?

All of this sounds sinister, yet it also sounds like a moneymaker for a cash-strapped city stuck with an unfinished public works tunnel and looking for ways to pay for filling potholes. (Are you listening, Cincinnati?) Is the money worth the risk of DARPA collapsing the city into a massive sinkhole for “testing” purposes?

Sorry, DARPA. Only people are innocent until proven guilty, and that’s getting a little shaky these days. Secret government agencies that develop futuristic technologies are always under suspicion.

So, what’s up with the urgent need for tunnels?

The “Storming Area 51” Controversy and an Earlier, Similar Affair