I've been to Mississippi. Let me first just say that if I was 7 feet tall and covered in thick black fur, Mississippi would be the one of the last places, second only to Louisiana, that I'd want to spend my time. If bigfoot is living in Mississippi, I would urge him to leave or, at the very least, shave. It's hot down there. But despite the deep south seeming a completely inhospitable habitat for sasquatch, there have been a great many sightings and reports of the big fellow in the region, and more than a few in Mississippi. A video has recently been unearthed and making the rounds that purports to show bigfoot himself doing who-knows-what to a tree in the Mississippi forest.

The video was shot in 2013, but recently started getting coverage again and began, as they say, "going viral" after being shared by YouTube channel "Disclose Screen."  Disclose Screen is calling it the "best bigfoot footage ever," but I'll let you be the judge of that. You can watch the video for yourself here. 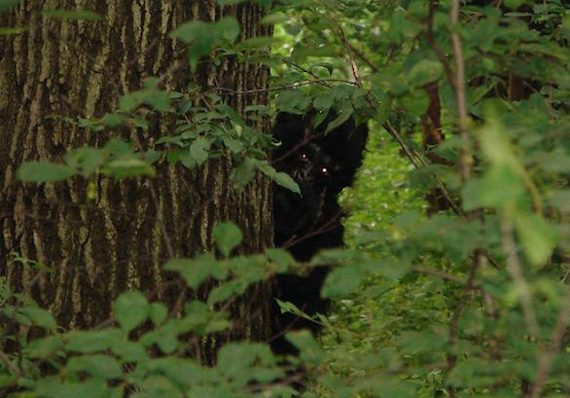 The footage was taken by Josh Highcliff in 2013 near the town of Tunica, Mississippi. In the original upload Josh describes his encounter:

“There was this huge black thing crouched by a dead cypress about 50 yards away, I thought it was a hog but saw these big shoulders and a head upright with hands. It looked like it was digging out the stump.

“When it stood up I could not control myself and ran. That stump was huge and I'd guess the sucker was 7feet tall.”

In the video you can see this big black shape rustling around a tree. At first it definitely looks like it could be a bear. In fact, at first I was definitely sure it was a bear. But then it stands up. Of course that's the exact moment that Josh Highcliff runs away, so there is only a brief moment of being able to see its humanoid shape.

That's not to say the video is a hoax. Far from it. The video could be completely genuine. After all, if I was walking through the Mississippi woods and saw a man in a gorilla suit, I would run away very, very fast.

Truly Bizarre Accounts of Hairy Humanoids in the Sewer