It was the summer of 2005, and lawyer Chuck Rutherford and his live-in girlfriend Lana Ann Stempien, also a lawyer, had come to Lake Huron for a boating vacation. Lana was an avid, experienced boater and seasoned skipper who had been long planning this trip in detail, and on August 10 the two set off from her parent’s house in Belle River, Canada, aboard the 27-foot Wellcraft cabin cruiser Sea’s Life. Their adventure was to take them up the St. Claire River and into Lake Huron, after which they planned to make their way to Mackinac Island. It was an exciting getaway for them and the weather was calm, but they would never make it to their destination, and they would go on to become one of the most baffling mysteries the Great Lakes have ever seen.

Along their route, the couple made a stop at a marina in Oscoda for a meal and to get some rest before continuing on their journey. The next day, August 11, they headed off to Presque Isle, where they refueled and continued on their way at approximately 12:30 PM. At the time the weather was getting a bit worse, but it was still manageable and Lana was experienced enough that there should have been no problems. In the meantime, Lana’s family became worried because they were behind schedule, but at 1:45 PM Lana made a call on her cell phone to her aunt saying that they were alright and would arrive at Mackinac Island in a couple of hours. She was described as being chatty and sounding in good spirits, with the two talking for a full 14 minutes, and there was nothing at the time to suggest that anything was awry or that they were in trouble. However, this would be the last person to ever speak to Lana Stempien. Boater Tom Behan, who was also on the lake that day would later see the Sea’s Life struggling through the choppy water, saying of it:

The boat was bobbing around like a cork and I made a remark that “Boy, there’s a brave soul out here in that size boat in a 5 foot sea.” I said, “I think the boat’s in trouble.”

When they didn’t arrive as scheduled at Mackinac Island the family became worried, and when they still had not arrived the following morning the Coast Guard was notified, and this is where the tale would take a turn for the strange. The Coast Guard had no trouble finding the Sea’s Life, but it was far off course and it was also immediately apparent that something was wrong. The vessel was floating around aimlessly in open water with its engine still idling, the lights were off, the swim ladder was up, and its radio was playing loudly, and there was additionally an anomalous 20-foot line trailing off the back of the boat. The Coast Guard used bullhorns to hail the Sea’s Life but there was no response, and when they boarded there was found to be no one there, with the couple's cellular phones, shoes and life preservers left behind. Rather curiously, a knob from the instrument panel was found to be embedded in the sole of one of Lana’s shoes for reasons that could not be ascertained, and also odd was that the GPS unit had not been turned on until that morning at 1:22 AM. Why? No one knows.

A massive search was immediately launched, with the Coast Guard scouring 1,600 square miles of the lake but finding absolutely no trace of the missing couple. After over a day of using all of the resources available to them the official search was called off, but friends, family, and volunteers kept it up while distributing missing person flyers all over the region, still not finding anything. The Sea’s Life was carefully examined for clues, but there was no sign of any sort of foul play, no evidence of a struggle, no blood, nothing. The wallets were found to still contain a good amount of money, their cell phones were there and operational, all of their belongings were properly stowed and put away, it almost seemed as if they would come back at any moment. The best guess that authorities could come up with is that they had gone for a swim and then drowned, but not only were both the swimming ladder and anchor raised and the engine idling, but the water was far too cold for them to have wanted to take a dip and it had also been a bit rough at the time. It was all rather baffling, and the questions of what had happened to Chuck Rutherford and Lana Stempien remained unanswered.

On August 24th, two weeks after the couple’s mysterious vanishing, Lana’s body was found washed up on a beach near Hammond Bay, a few miles from where her boat was found, but it would only serve to deepen the mystery. The body was found to be completely nude except for a gold necklace, a ring, and her prized Omega watch, and there were no external injuries or signs that she had been attacked. An autopsy would find elevated levels of carbon monoxide in her system, and it would ultimately be determined that she had died from drowning after inhaling fumes from the boat’s exhaust. The thing is, why would she go in the water for a skinny dip wearing only some jewelry and her expensive watch, which was not waterproof by the way, in the frigid, choppy water in the first place? It also would have had to have been late at night because the GPS had been turned on at 1:22 AM by someone, so the idea of a swim seems a bit far-fetched. 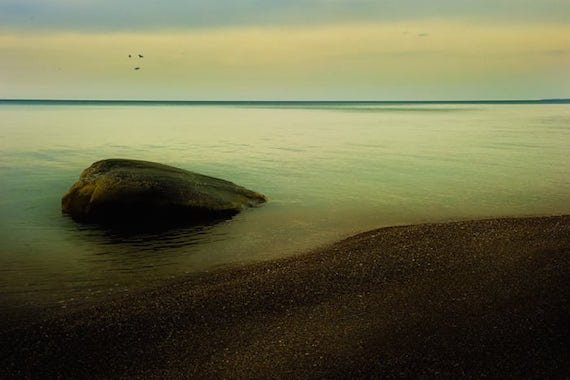 It was thought that the couple might have been intoxicated and had a lapse of judgement in going for a nighttime swim, but not only were there only very negligible traces of alcohol found in her system, but Lana’s family insisted that she was a very careful person who would not have drunk while operating her boat, and that she always took her jewelry and watch off when she went swimming. Also, why would they go into the water with the ladder up without anchoring the boat and with the engine still running? It didn’t make any sense.

Lana’s family refused to believe the swimming theory, instead going on to pursue the idea that all of this is evidence pointed to the fact that she had met with some sort of foul play, perhaps pushed overboard, maybe even by Rutherford, but friends insisted that the two were in love and that he would never do that. Perhaps someone else then? There was one unconfirmed tip that a witness had seen rubber boat bumpers from another vessel attached to the Sea’s Life, suggesting they had been boarded by another party, but there was no sign of these when the Coast Guard arrived. Another sign of foul play was the knob embedded in the shoe, which was indicative of her struggling with someone, but there was very little other evidence of any foul play aboard the craft and police have mostly ruled it out as an explanation. It would shed more light on the situation if Rutherford’s body was also found, but it never has, and remains missing to this day.

Despite the general tendency for authorities to shy away from foul play, Lana’s family disagrees, and have spent much time and money looking into the case on their own. One clue that they have found is that the data for the GPS system seems to have been tampered with and even partially erased at some point, which they have concluded also points to foul play. One family friend, Andrew Jarvis, has said of this anomaly, “There is no other explanation other than somebody physically erased that information—somebody who didn’t want anybody to know where that boat had been.” 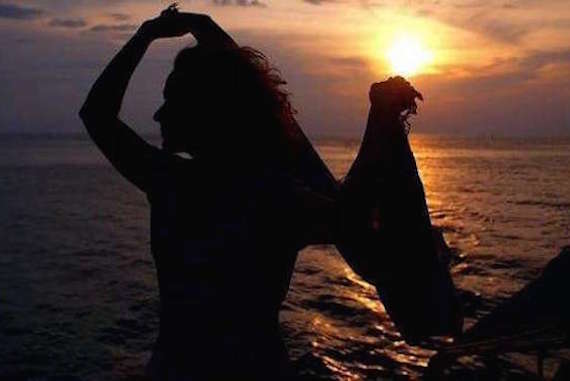 If this was foul play, then there is the question of what the motive could have possibly been. One idea is that they were attacked by pirates, but not only is the area not known for piracy, but nothing at all seems to have been stolen. Some people have claimed that the couple had been having issues and frequently arguing at the time, and that Rutherford might have snapped during an argument and pushed her overboard before going into hiding. Evidence has also been found that Lana had left a phone message for an ex-boyfriend shortly before the disappearance, which might have instilled a jealous rage if it had been discovered, but friends and family insist that the two had left on their trip on good terms and that Chuck was not a violent or short tempered person at all. Yet another theory is that they had been targeted for a mafia hit considering that Rutherford was a criminal prosecutor, but one investigator on the case has said of this:

Nobody to my knowledge to date has identified someone that he may have prosecuted that would have a vendetta against him. If that motive existed, there’s a lot of easier ways to get at him than out in the middle of Lake Huron.

In the end we are left with many strange clues and questions, but very few answers. A missing couple, the boat found in the middle of the lake with motor running and everything left behind, anchor and ladder up, the GPS system weirdness, the body found naked except for jewelry and a watch, and the complete absence of Rutherford, who has since been declared dead. What does it all mean and how does it connect? Something happened out there on Lake Huron that fateful day, but what? Was this all an accident? Was it foul play and if so by who? Did Rutherford kill Lana and then escape to start a new life? No one knows. There have been no new leads, no new clues, nothing, leaving it a case that will probably remain as cold as the waters of the lake.