Alien Parasites in Fact and Fiction

Is it possible that aliens are not just visiting us, abducting us and learning about us, but also eating us (albeit in a very weird way)? As disturbing and as nightmarish as it might sound, that may well be exactly what is going down. Over the years I have come across cases involving people who have crossed paths with the dreaded Men in Black - only to find themselves falling sick, ill and weak in incredibly short periods of time. It's as if the MIB are predatory, vampire-like entities. The main difference: one is a fictional entity that feeds on blood and the other is an all too real figure in black. It's very much the same with the creepy Black-Eyed Children: if you dare to let them in your home, they will drain you dry of your energy. The Shadow People, the Hat-Man, and the Grinning Man fall into this particular category, too. In the world of sci-fi, however, such a thing has occurred in a fashion that mirrors some of the claims concerning what may be afoot in the real world. A 1985 movie, Lifeforce was directed by horror legend, Tobe Hooper – who also directed the groundbreaking 1974 movie, The Texas Chainsaw Massacre and the acclaimed 1979 TV mini-series version of Stephen King’s novel, Salem’s Lot.

That the movie featured many well-known actors, including Patrick Stewart (who, in 1987, took on the role of Captain Jean-Luc Picard in Star Trek: The Next Generation) should have made Lifeforce a big hit. Unfortunately, it was not a hit. At all. Cinema-based earnings didn’t even reach half of the $25 Million budget that had been allocated for the production of the movie. That said, for zombie fanatics, Lifeforce – based on Colin Wilson’s novel, The Space Vampires – should not be missed.

The movie begins in outer space, in 1986, the year that Halley’s Comet made its most recent appearance. A team of astronauts embark on a mission, in a NASA Space Shuttle called the Churchill (named after British Prime Minister Sir Winston Churchill), to rendezvous with the gigantic comet. On doing so, the crew is shocked to find that deep within Halley’s Comet there is a huge spacecraft of alien origins. Not only that, the ship is filled with numerous, dead, winged monsters and three very human-looking beings: two men and one woman. Unbeknownst to the astronauts, the three entities are not, as is first suspected, fellow Homo sapiens that have been abducted by the gargoyle-like creatures. They are one and the same. In other words, the aliens have the ability to morph into human form and back again. It isn’t long before all three are secretly brought to London, England for study at the fictional European Space Research Center.  Despite being heavily guarded by British Army personnel, that’s when the trouble begins.

Clearly not dead, the trio of non-humans appears to be in a collective state of deep, suspended animation. Until, that is, they wake up. The woman, using what might be termed a form of extraterrestrial hypnotism, entrances one of the troops and – utterly naked – moves towards the man, seemingly to kiss him on the lips. This is no normal kiss, however. As the alien female embraces the soldier, she drains his body of its vital energy – the life-force, in other words, of the movie’s title. His body falls to the ground, as a withered, shrunken husk, and the alien escapes from the facility. A couple of hours later, a shocking development occurs. While the military team overseeing the project – and acting to keep everything under wraps and away from the public and the media – tries to figure out what is afoot, word comes in that the body of a woman has been found in nearby woods. She, too, is as withered as an old, leathery Egyptian mummy. When her body is brought to the space center for study, it reanimates – as does the body of the dead soldier. They, too, are now crazed undead entities needing to feed on vital life-energy. A doctor is then violently attacked and bitten. He also dies and returns as a savage monster. And with the morphed alien on the loose, it’s not long before London is engulfed in an epidemic, one in which the living first become the dead, but who then mutate into something far worse. 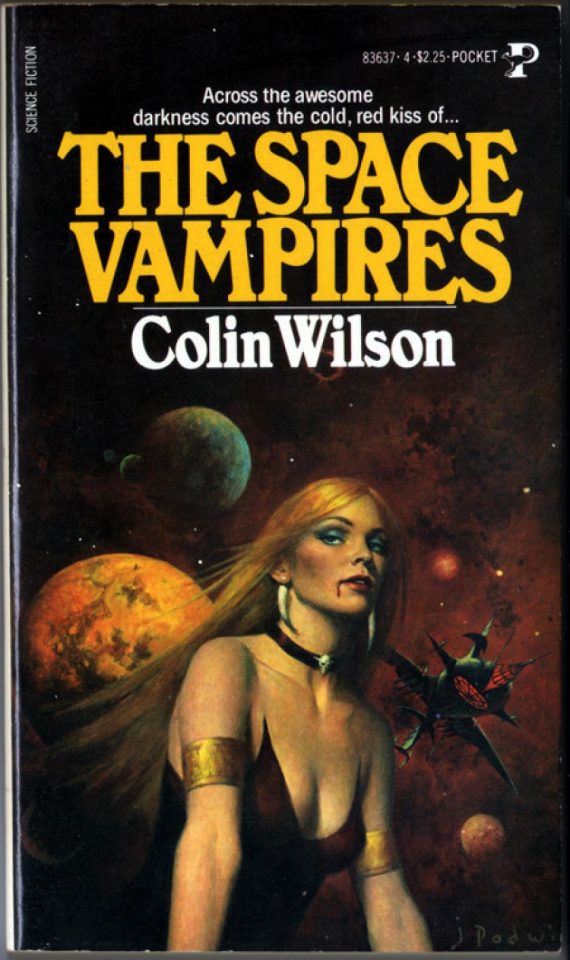 In a neat twist, the team comes to believe that these energy-sucking aliens – and the people they infect – are responsible for our centuries-old legends and folklore of bloodsucking vampires. But, in reality, it’s energy, and not blood, that the reanimated so badly need. And they don’t dress like cloaked Count Dracula, either. One hundred percent zombie-like in appearance, the ragged dead rise up in violent style, rampaging around the streets of London in huge throngs, attacking the living, sucking them dry, and ensuring their victims soon become marauding killers, just like them. The fate of the entire human race is now precariously hanging in the balance. It’s accurate and fair to say that Lifeforce is an unusual and highly alternative production that blends together three, distinct genres that are generally kept poles apart from each other: zombies, vampires, and science-fiction. Notably, however, all three are successfully fused into what is an entertaining – but unfortunately much under-appreciated – production. A movie that parallels reality? Maybe...

The Strange Story of “The Changeling” Haunting