A giant flying reptile as big as a plane soared through Canadian skies millions of years ago. The gigantic species of pterosaur has been named Cryodrakon boreas (meaning “cold dragon of the north winds” in Greek) and was part of a group called azhdarchids.

The Cryodrakon boreas fossils were discovered several decades ago and were previously believed to have belonged to the Quetzalcoatlus species – another species belonging to the azhdarchid group. However, since new fossils have been recovered, scientists have determined that they instead belonged to an entirely new species; also the first new species of giant pterosaur ever discovered in Canada.

The fossils were all discovered at Dinosaur Provincial Park in Alberta, Canada, and date back to around 77 million to 74 million years ago which was during the Cretaceous Period. According to David Hone, who was the lead author of the study (which can be read here) as well as being a senior lecturer and director of the biology program at Queen Mary University in London, azhdarchids had supersize heads, long necks, long legs, and large feet. They lived on every continent with the exception of Australia and Antarctica.

Additionally, he told Live Science that even though the azhdarchid group was large, hardly any fossils exist. He explained that fossils are normally preserved by being buried under several layers of sediment which protects them from harmful bacteria. The fossils that have been the best preserved were typically those of animals who lived close to the water, and the pterosaur species lived on land. “And their bones are insanely thin, so they are very rare,” Hone explained, adding, “We’re lucky we have as much good material as we do.” 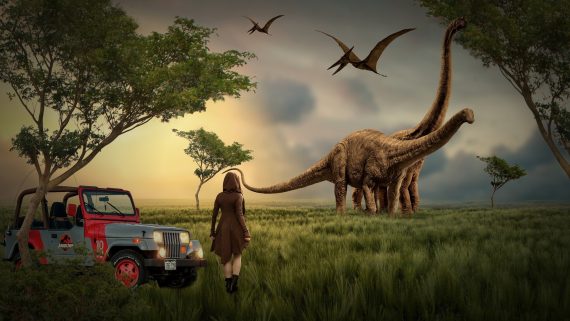 Scientists determined that based on the size of the neck bone, the fossils belonged to an adult. And this adult was definitely huge, as its wingspan reached approximately 33 feet (or 10 meters) and it was around the same height as a giraffe. It was about the same size as the Quetzalcoatlus – its gigantic cousin from the azhdarchid family. It’s no wonder that it has been compared to a plane flying in the sky.

While it’s unknown what colors or patterns were visible on the species, an artist illustrated the pterosaur with the colors of the Canadian flag. You can see his illustration here, as well as a picture of the neck bone that was discovered.