The address is not as famous as 112 Ocean Avenue, Amityville, New York (what haunted house address is?) but the house at 3406 Brownsville Road in Pittsburgh, Pennsylvania, has had a good share of publicity stemming from the experiences of the family that bought it in 1986 and lived there through a series of horrific and tragic experiences until the desperate family had the house 100-plus-year-old house “successfully” exorcised. The owner wrote a book chronicling their experiences and his research into the house’s history, which allegedly included a murder on the property in 1792 of a woman and her children by Native Americans. Not surprisingly, the current house is allegedly built over their graves. Now, the owner has moved out and wants to turn The Brownsville Road House into a B&B. Before you make your reservations and charge up your EMF meter, he has one warning … ghost hunters are NOT welcome.

“I don’t want ghost hunters, spiritualists or people here with Ouija boards bringing it all back.”

“It,” according to Bob Cranmer, owner of the house and future B&B and author of “The Demon of Brownsville Road: A Pittsburgh Family’s Battle with Evil in Their Home,” included objects moving, footsteps, moaning sounds, bleeding walls and a psychological terror that Cranmer decided was a demon, possibly tied to the other horror that allegedly occurred in the house – a doctor may have performed abortions there to pay for his maid and household help. 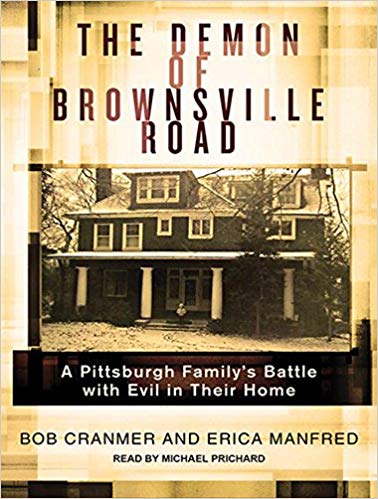 Wow. Who WOULDN’T want to spend a night in this place?

Well, Bob Cranmer for one. Besides scaring the daylights out of his family, it ruined his marriage, may have killed his elderly aunt, spawned a demon that possessed his son into assaulting him and may have interfered with Cranmer writing the tell-all book that became a bestseller. The story also inspired a number of TV documentaries and dramatizations. So it’s understandable that Cranmer doesn’t want to live there … he just wants to make a profit from it.

For those living in a cave, Mr. Carson is the lovable butler on “Downton Abbey.” Cranmer told the Pittsburgh Post-Gazette he wants to dress as an early 20th century character and give tours of the themed rooms he remodeled, decorated and named himself (pictures here) – the Chess Room (equipped with Civil War chess pieces and a 1950s TV), the Lincoln Suite (you can figure this one out), the Nautical Room (sailing), the Washington Dining Room (George Washington allegedly slept on the property in 1784) and the Blue Room where a woman allegedly died from a botched abortion. Cranmer’s son Charles isn’t too scared either – he’s the B&B chef and registration clerk. Cramner even says he’ll step out of character and answer questions about the ghosts the demon and the horrors his family allegedly endured (descendants of the previous owners say they never saw any ghosts and some investigators question the family’s story).

And yet … Cranmer seems to be passing up the biggest money-making opportunity of all – catering to ghost hunters and paranormal fans who want to spend time at the home on Brownsville Road that inspired “The Demon of Brownsville Road.” Does he really believe the exorcism worked and the ghosts and demon are gone? Is he afraid the true story of the house might contradict his book?

Or is he protecting the franchise while New Line Cinema, a film production studio of Warner Bros. that bought the rights, works on the movie?

How did that work out for the owners of 112 Ocean Avenue, Amityville?

The Legends of Scotland’s Upright Wolf-“Things”