“This could change everything” is an overused exclamation, but the latest news out of Idaho (yes, Idaho!) could change everything we’ve known and accepted about the identity of the first humans to settle in what is now North America. Stone tools and animal bone fragments found in Idaho have been radiocarbon-dated to 16,600 years ago – more than 1,000 years before the Clovis people who were thought to be the earliest settlers. Even more everything-changing, the artifacts match those found not in Siberia but in … Japan!

“When I first saw that the lower archaeological layer contained radiocarbon ages older than 14,000 years, I was stunned but skeptical and needed to see those numbers repeated over and over just to be sure they’re right. So we ran more radiocarbon dates, and the lower layer consistently dated between 14,000-16,000 years old.”

The discovery is described in detail in a paper published in the journal Science co-authored by Oregon State University Professor Loren Davis and summarized in Sci-News (with photos of the site and artifacts). Davis has been conducting excavations at an area known as Cooper’s Ferry in Idaho for ten years – a search that began with his PhD dissertation on the early indigenous people of the area. Cooper’s Ferry is at a bend in the Salmon River (known locally as the River of No Return), which is fed by the Snake River, the main tributary of the Columbia River, whose mouth is the Pacific Ocean … where the mystery of the artifacts Davis found at Cooper’s Ferry deepens. 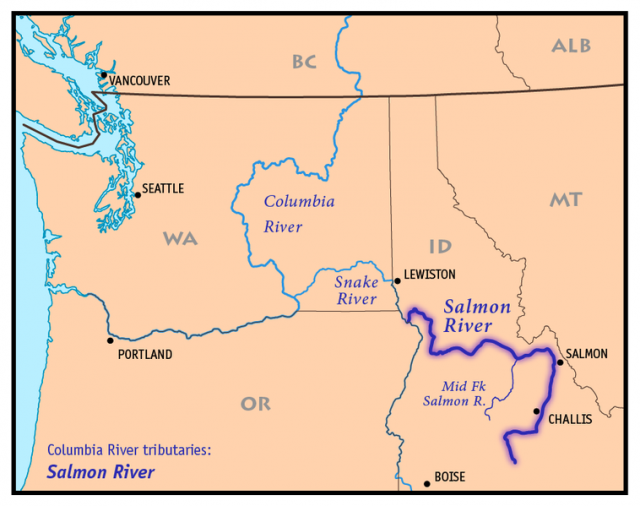 In addition to the 189 stone artifacts (tools, projectile points, blades, etc.), Davis and his teams found charcoal, a fire-cracked rock, and 86 large animal bone fragments. The age of the tools predates the Clovis culture, long-thought to be the first human settlers of the Americas. Also, the points on the tools are different than Clovis tools. Davis recognized them.

“The oldest artefacts uncovered at Cooper’s Ferry also are very similar in form to older artefacts found in northeastern Asia, and particularly, Japan.”

Japan! That takes us back upstream from the Salmon River to the Snake to the Columbia to the Pacific … where people from the northern Pacific islands might have arrived after a transoceanic trip by boat – not by an ice-free bridge from Siberia to Alaska. Is it possible that these Pacific Asians followed these rivers to Cooper’s Ferry and decided not to go further up the River of No Return?

"The most parsimonious explanation we think is that people came down the Pacific Coast, and as they encountered the mouth of the Columbia River, they essentially found an off-ramp from this coastal migration and also found their first viable interior route to the areas that are south of the ice sheet."

Need more proof? The tooth fragments found among the animal remains tooth fragments are from an extinct horse known to have lived in North America at the end of the last glacial period, which predates the ice-free-bridge-crossing timeframe.

However (there’s always a ‘however’), “parsimonious” does not mean “unequivocal” or “definitive.” John Hoffecker, a fellow at the Institute of Arctic and Alpine Research at the University of Colorado, Boulder, who was not a part of the study, points out in Live Science that Native Americans have no genetic connection to people from northern Japan – an area whose spear points match those at Cooper’s Ferry. While there could have been an extinct group that made the trip, that’s hypothetical at the moment. Davis and his team are hoping to do genetic comparisons between the Cooper’s Ferry bones and those found it the few other sites in Chile, Texas and Oregon.

Does this change everything? Not yet, at least not until we find out what happened to the mysterious people who may or may not have sailed and rowed from Japan to Idaho. The River of No Return might hold the answers.

Could anyone make that trip in a canoe today? Sounds like a new endurance event in the making.

A Terrible Beast in a Hidden Room