When you place an environmental observatory weighing 770 pounds on the floor of the Baltic Sea  you don’t expect your employees to bring you this kind of news:

"On August 21st at 8:15 pm it stopped the data transmission. At first we thought of a transmission error. {But} the devices were gone, the divers could not find them anymore."

According to the BBC, the Boknis Eck Observatory was installed in December 2016 by the GEOMAR Helmholtz Center for Ocean Research Kiel and the Helmholtz Center Geesthacht in the outlet of Eckernförde Bay, which is located north of Kiel, Germany and south of Denmark. It was 1.8 kilometers (1.1 miles) offshore at a depth of 22 meters (72 feet) in waters prohibited to all boats. The $331,902 (£270,000) device consisted of two desk-sized components – sensors and a power supply connected by cable to the coast. 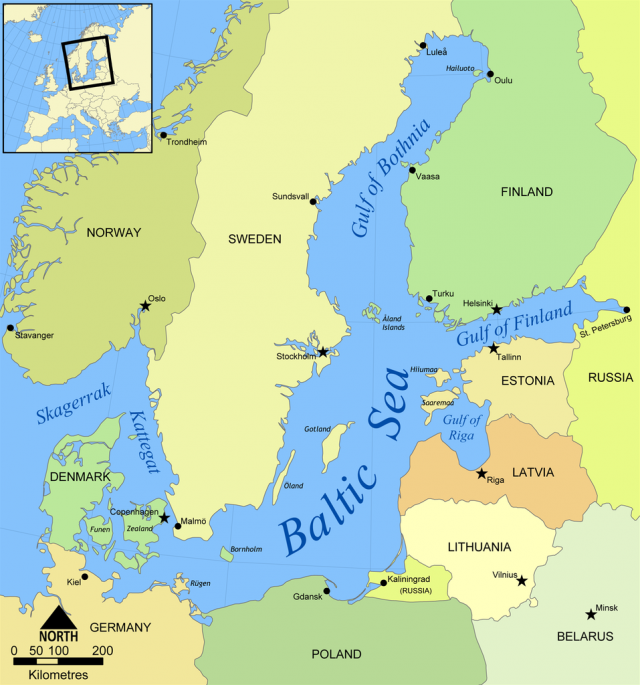 "When the divers reached the bottom of the sea last week at the observatory's location, they found only the torn off land cable. It was completely shredded”

Shredded! Boknis Eck coordinator Prof. Dr. Hermann Bange had to give his bosses at GEOMAR the bad news that they could no longer measure environmental data such as temperature, salinity, nutrients, oxygen, chlorophyll, flow velocities, methane concentrations and other critical information from the floor of the Baltic Sea because something absconded with their observatory. But what?

“Since the racks each weigh around 520 and 220 kilograms and the cable connections are extremely massive, storms, currents or marine animals are the culprits.”

If the 770-pound observatory was knocked off of its moorings by a storm, wouldn’t there be a trench leading up to where it was eventually deposited? And if it was an animal, what kind of creature living in the Baltic Sea is large enough to detach and carry away something weighing that much? While there are some whales, none are large enough to carry out this task. What else could it be?

“I am one hundred percent convinced and confident that we have found something that is very, very, very unique. Then if it is a meteorite or an asteroid, or a volcano, or a base from, say, a U-boat from the Cold War which has manufactured and placed there - or if it is a UFO... Well honestly it has to be something.”

“It” is the so-called Baltic Sea anomaly – an object discovered on the floor of the Baltic Sea in 2012 which has defied identification and spawned countless theories – geological, conspiracy, paranormal, scientific and otherwise. Dennis Åsberg, part of the diving team that found it and reported that it messed with their compasses and equipment, had no idea what it could be. While the prevailing opinion is that it's a disc-shaped rock distorted by murky waters, another alleged compass-interfering anomaly was discovered nearby earlier this year. Could something otherworldly have removed the observatory? A secret military operation?

Or was it just regular humans looking for scrap metal? If that was the case, GEOMAR is hoping someone notices and notifies them. In fact, if anyone knows anything about the mysterious disappearance of their observatory, GEOMAR would like them to report it.

"Or maybe someone will find parts of the apparatus somewhere on the beach."

If there’s a huge mysterious creature with the apparatus in its jaws, get help first.

The Smallest Types of Sasquatch of All?