One Woman Actually Stormed Area 51 — Is She Still Alive or On Earth?

It’s the greatest paranormal/ufology/conspiracy event of the century -- if not perhaps ever – so it’s only fitting that it ends today in … disappointment? Unfortunately, that’s the news from Area 51 this weekend where what started out as “Storm Area 51, They Can't Stop All of Us” became a 2 million-persons-coming extravaganza which downsized into a couple of music festivals after another storm of warnings, lawsuits, folds, fauxs and fallacies and then reached a peep of a climax as an estimated 3,000 people showed up, around five people got arrested and no one actually stormed Area 51.

That’s the headline on a tweet by Matthew Carswell (@Leche_frio) which showed a video of what appears to be the only person to actually step around the barrier, cross the border, and storm Area 51 on this iconic/ironic weekend. OK, “storm” may be an exaggeration as it appears she walked in very slowly – perhaps out of caution or perhaps because she’s an “old lady.” (You can watch the video for yourself on Twitter or here.)

Needless to say (why else would we be doing this story?), she did it. Matthew Carswell (@Leche_frio) recorded the woman for about 45 seconds, showing her approach the secure facility’s back gate, dip under it and begin walking towards … what? Aliens? Men in Black? Security guards? Stealth bombers? (OK, they apologized for that one.)

Well, that’s obvious … although hard to tell because we never see her face. In fact, what’s more interesting is that Carswell pans the scene and we see a number of police officers watching her enter as well. After being asked too many times, he posted the answer on Twitter.

1. The cops couldn’t go after her since they were only state cops and it’s a federal base.”
2. She got scooped up by 2 trucks like half a mile in
3. No I don’t know what happened to her but I can assume she’s jail

That last assumption was confirmed by the Reno Gazette, where Lincoln County Sheriff Kerry Lee revealed that the person was a 60-year-old woman (no identity given) and:

“She told us she was going to trespass. It was something she wanted to do, and she walked across.” 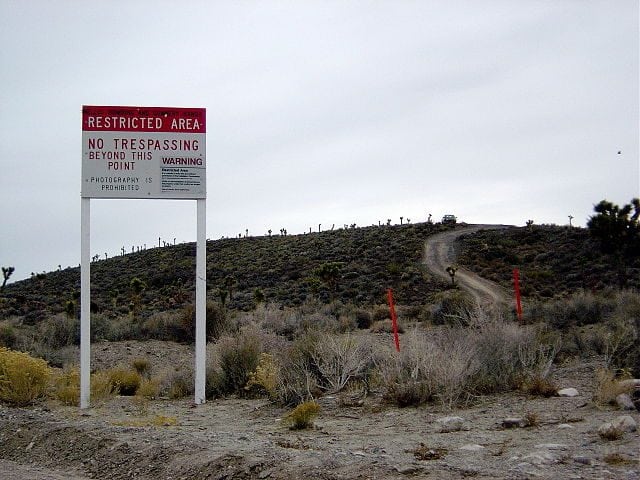 The Reno Gazette says “the California woman now faces a trespassing charge and a $1,000 fine.”

They should have taken up a collection to pay the fine, court coasts, lawyer fees, etc. for the only person brave (or dumb) enough to do what began as a rallying cry just a few weeks ago:

They were right … they didn’t.

Ancient Alien Probes May Hide on Near-Earth Asteroids, According to Astronomer