Opening a Catalog of Sea Monsters

Today’s instant access to worldwide, online news effectively ensures that whenever a strange creature is seen and reported, we soon know about it. Less easy to determine is the scale of encounters with monstrous beasts in centuries past. Fortunately, there were those who collected and chronicled such incidents. One of those was a man named Henry Lee, who, in the 19th century, made it his business to secure just about as many reports as possible. While Lee’s dedicated research resulted in the surfacing of numerous accounts of massive and mighty beasts of the oceans, three reports in particular – all from the 19th century – stand out in the credibility stakes. In Lee’s own words:

“In 1817 a large marine animal, supposed to be a serpent, was seen at Gloucester Harbor, near Cape Ann, Massachusetts, about thirty miles from Boston. The Linnaean Society of New England investigated the matter, and took much trouble to obtain evidence thereon. The depositions of eleven credible witnesses were certified on oath before magistrates, one of whom had himself seen the creature, and who confirmed the statements. All agreed that the animal had the appearance of a serpent, but estimated its length, variously, at from fifty to a hundred feet. Its head was in shape like that of a turtle, or snake, but as large as the head of a horse. There was no appearance of a mane. Its mode of progressing was by vertical undulations; and five of the witnesses described it as having the hunched protuberances mentioned by Captain de Ferry and others. Of this, I can offer no zoological explanation. The testimony given was apparently sincere, but it was received with mistrust; for, as Mr. Gosse says, ‘owing to a habit prevalent in the United States of supposing that there is somewhat of wit in gross exaggeration or hoaxing invention, we do naturally look with a lurking suspicion on American statements when they describe unusual or disputed phenomena.’” 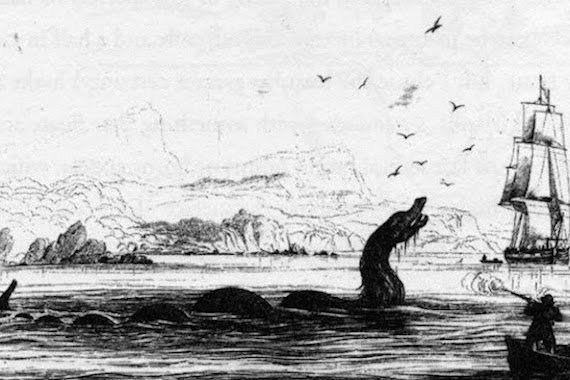 Lee also chronicled this amazing encounter of the sea serpent variety: “On the 15th of May, 1833, a party of British officers, consisting of Captain Sullivan, Lieutenants Maclachlan and Malcolm of the Rifle Brigade, Lieutenant Lister of the Artillery, and Mr. Ince of the Ordnance, whilst crossing Margaret's Bay in a small yacht, on their way from Halifax to Mahone Bay, ‘saw, at a distance of a hundred and fifty to two hundred yards, the head and neck of some denizen of the deep, precisely like those of a common snake in the act of swimming, the head so far elevated and thrown forward by the curve of the neck, as to enable them to see the water under and beyond it. The creature rapidly passed, leaving a regular wake, from the commencement of which to the fore part, which was out of water, they judged its length to be about eighty feet.’ They ‘set down the head at about six feet in length (considerably larger than that of a horse), and that portion of the neck which they saw at the same.’  There could be no mistake - no delusion, they say; ‘and we were all perfectly satisfied that we had been favored with a view of the true and veritable sea-serpent.’ This account was published in the Zoologist, in 1847 (P. 1715), and at that date all the officers above named were still living.”

Then we have this one from Lee which serves even further to demonstrate that our oceans are home to massive, unknown animals: “The next incident of the kind in point of date that we find recorded carries us back to the locality of which Pontoppidan wrote, and in which was seen the animal vouched for by Captain de Ferry. In 1847 there appeared in a London daily paper a long, account translated from the Norse journals of fresh appearances of the sea-serpent. The statement made was, that it had recently been frequently seen in the neighborhood of Christians and Molde. In the large bight of the sea at Christians and it had been seen every year, only in the warmest weather, and when the sea was perfectly calm, and the surface of the water unruffled.

“The evidence of three respectable persons was taken, namely, Nils Roe, a workman at Mr. William Knudtzon’s, who saw it twice there, John Johnson, merchant, and Lars Johnoen, fisherman at Smolen. The latter said he had frequently seen it, and that one afternoon in the dog-days, as lie was sitting in his boat, lie saw it twice in the course of two hours, and quite close to him.” 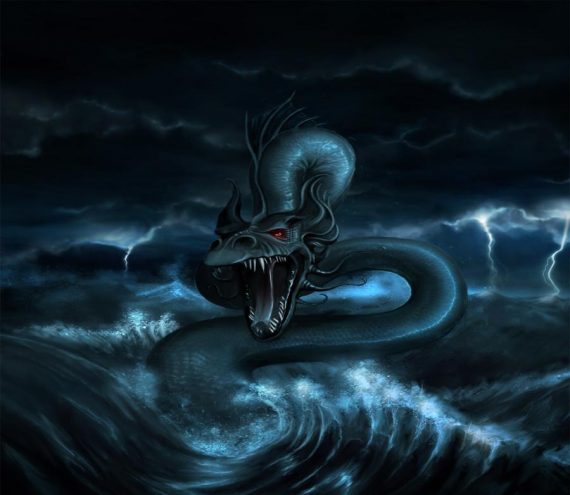 Lee continued, “It came, indeed, to within six feet of him [Jonoen], and, becoming alarmed, he commended his soul to God, and lay down in the boat, only holding his head high enough to enable him to observe the monster. It passed him, disappeared, and returned; but, a breeze springing up, it sank, and he saw it no more. He described it as being about six fathoms long, the body (which was as round as a serpent's) two feet across, the head as long as a ten-gallon cask, the eyes large, round, red, sparkling, and about five inches in diameter: close behind the head a mane like a fin commenced along the neck, and spread itself out on both sides, right and left, when swimming.

“The mane, as well as the head, was of the color of mahogany. The body was quite smooth, its movements occasionally fast and slow. It was serpent-like, and moved up and down. The few undulations which those parts of the body and tail that were out of water made, were scarcely a fathom in length. These undulations were not so high that he could see between them and the water. In confirmation of this account Mr. Soren Knudtzon, Dr. Hoffmann, surgeon in Molde, Rector Hammer, Mr. Kraft, curate, and several other persons, testified that they had seen in the neighborhood of Christians and a sea serpent of considerable size.”

A Mad Scientist, His Corpse Bride, and a Bizarre Historical Oddity