Here’s a new adage: it’s not a sport if it doesn’t have any fans. Think about it. Rock throwing was just rock throwing until on caveman watched another and doing it and challenged him to see if he could throw one farther than the last. Then more cavemen (of course it was cave ‘men’) joined in as the first one challenged the second to try beating his throw. However, outside of the remnants of ancient arenas like the Roman Colosseum, there are few archeological signs of ancient fans. That changed recently with the discovery of a skeleton in Bulgaria of an ancient sports fan … a man who not only watched but may have liked to work out on his own like his sports heroes. The first jogger? Amateur gladiator?

"In our opinion, the grave belongs to a Thracian aristocrat, who has practiced sport in his everyday life, rather than to a professional athlete."

In a LiveScience review of her report published this month in The American Journal of Archaeology, Daniela Agre, an archaeologist at the National Archaeological Institute with Museum at the Bulgarian Academy of Sciences, describes beginning excavation in 2015 in a Bulgarian tumulus (a type of burial mound) discovered near the village of Boyanovo in was once the Roman province of Thrace in southeastern Bulgaria. Thirty meters (98 feet) long and three meters (9.8 feet) high, the tumulus contained a sarcophagus, a tomb and brick-lined grave and was located near the remains of what appeared to be a monument. That plus the remnants of artifacts indicated to Agre that the skeleton of a 35-to-40-year-old male belonged to an aristocrat. But not just any aristocrat … a jock.

“Also buried with the remains, the team found a blade used to scrape sweat and dirt from the skin.”

The blade was not a knife but a strigil, a curved, flat tool with a handle that was used by ancient Greeks and Romans to scrape off dirt, perspiration and oil during and after participating in athletic competitions. It was also used by snobby aristocrats who often left the scraping chore to slaves. Apparently, it was a common burial item so that the cleansing could continue in the afterlife. He was also buried with two pairs of shoes studded with hobnails on the soles. Was he an early track runner? There was nothing else to indicate that he was a gladiator or full-time athlete, so Agre believes the man was a weekend jock and third century CE gymnasium rat.

And a fan of boxing and wrestling.

The tumulus also contains a balsamarium, a container used to store liquids such as balsam or perfume, that made to depict a warrior’s head. But not just any warrior – a warrior of the ring. The face on the balsamarium had a broken nose … a sure sign it depicted a boxer or a wrestler (photos here). In addition, the head was capped with hat made from panther or leopard skin – a cap that was generally worn by an athlete. Did a cat’s skin really protect this ancient boxer from concussions?

"It is probable that the representation of the athlete's cap as the skin of a savage feline was meant to suggest the athlete's similarity to Hercules and, in this way, to signify the heroic power and courage possessed by the athlete."

Before losing his hair, Hercules fought and defeated a Nemean lion, a vicious monster in Greek mythology that lived at Nemea. 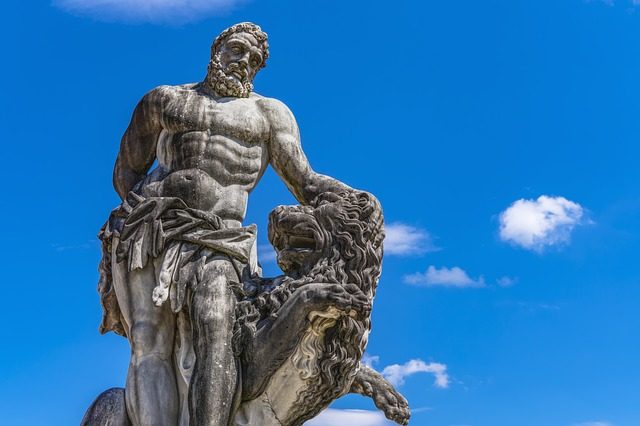 Was the guy in the grave that good of a weekend athlete? There are no medals or trophies to indicate he participated in local competitions. Nor were there any ticket stubs or autographed items to indicate which pro wrestlers or boxers he was a fan of.

Don’t try coming back from your lunch workout and scraping off the sweat with a butter knife. You’ll be sitting in the conference room alone. Trust me.