Hotels are in many ways already inherently creepy as it is without paranormal phenomena thrown into the mix. How many people who you don't know and have never met and never will have passed through that room, slept in that bed, used that sink, perhaps committed crimes or atrocities right there where you are standing or sleeping? These walls are saturated with the memories of countless strangers who have passed through and they hold these past people's secrets within them as well, made even eerier the older the hotel is. Considering this, hotels seems like a perfect place for there to be ghosts, and there are numerous such locations throughout the world. One of the most haunted hotels in the United States, and also one of the oldest, lies out in the bleak, desolate desert of the state of Nevada, where there are many ghosts said to be permanent guests who have never checked out.

Out in the desert of central Nevada is the unincorporated town of Tonopah, carved out of these arid badlands in 1900 when silver was found in the area. People came flooding in, risking the harsh, forbidding terrain of this bleak moonscape for the chance to make it rich, and slowly the town bloomed out there in the wasteland, drawing in more and more people and thriving as the years went on. It was here in this remote desert boom town that the historic and upscale Mizpah Hotel was erected in 1907 by a cabal of business men and mining company executives to cater to rich clientele, which would include industry and business tycoons, prospectors, politicians, celebrities, and wealthy socialites. For its time the ambitious 5-story building was the tallest in the entire state, and remained so for a quarter of a century, as well as sporting state of the art facilities such as the first electric elevator west of the Mississippi.

It looked very out of place in this dusty mining town, but that was part of its allure and mystique. Over the years the Mizpah Hotel became famous across the country, and drew to itself various legends such as Wyatt Earp, who kept the saloon, and the infamous Jack Dempsey, who was a bouncer. Stories like these helped make the establishment larger than life, regardless of how true they were. For over a hundred years the Mizpah Hotel was the jewel of the Nevada desert, but sadly, what goes up must come down, and the boom of Tonopah turned to bust, the Mizpah eventually closing its doors in 1999, only to be resurrected again in 2011 to be renovated and reopened. The hotel is now a member of Historic Hotels of America, but besides its rich history it has also gained a reputation as being really quite haunted.

By far the most well-known of the hotel’s many ghosts is the notorious Lady in Red, who like any good ghost has a whole tragic history attached to her. The story goes that she was once a high-class prostitute at the luxurious hotel, where she lived in an opulent suite on the 5th floor. One day she was supposedly confronted by a jealous lover in the hallway after he found her plying her trade, things got heated, and she was brutally stabbed and strangled to death right then and there. Of course, since this is a haunting, she never did leave, and allegedly appears as an apparition in a red dress who haunts the entire floor.

Most of the activity is based in her old room, which was once much larger and has in later years been divided into three rooms, numbers 502, 503, and 504, with 502, called The Lady in Red Suite, attracting the most paranormal activity. Here the lady will appear at all hours, and has a habit of sitting on the bed as guests try to sleep or standing there in the shadows watching them. Legend has it that if she likes a guest she will leave a pearl on the pillow, but if she does not she is more likely to throw a tantrum and toss objects and furniture about. She apparently dislikes male guests and is much more friendly with women. The Lady in Red is also sometimes seen in the 5th floor hallway, and is known to frequent the elevator as well, where she will startle visitors by whispering “Hey you” into their ears or taking them to the 5th floor no matter what floor button they press. Her presence is so well-known and bold at the hotel that the haunting was investigated by the TV show Ghost Adventures, and some employees refuse to go into the suite, and indeed generally avoid the 5th floor all together. 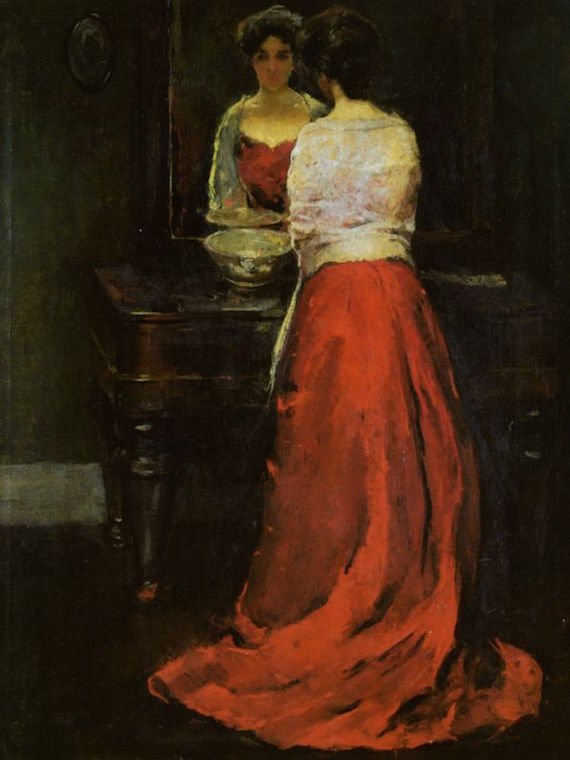 Joining the Lady in Red is the ghost of Senator Key Pittman, who supposedly spent his final night at the Mizpah hotel in 1940 and died there right before the upcoming election. It is said that his entourage decided to keep his body hidden away on ice in the bathtub in order not to upset the election, and only when Pittman won did they come clean about his death and have him given a proper burial. The room where he supposedly died, now called “The Senator’s Suite,” is purportedly haunted by the dead Senator, although he is mostly said to be a benign presence and not malicious in any way. Some witnesses to his ghost have explained that he almost seemed to be lonely and just trying to communicate with them.

Also adding to the colorful cast of ghostly character at the Mizpah Hotel are the spirits of two miners said to lurk in the basement of the establishment. According to the tale, three miners dug up into the basement in order to steal a stash of silver that was being stored down there in a section being used as a vault. They were apparently successful, but one of the trio turned on the others and shot and killed them in order to keep all of the spoils for himself. To this day the miners are said to still be down there, and are known as being very mischievous, poking or prodding guests, draining electronics batteries, tugging at shirts, knocking off hats, and trying to trip people. The prankster ghosts are said to not be particularly malevolent, but those who have encountered them have said it was very unsettling nevertheless.

The 3rd floor of the hotel is also supposedly very haunted, and here it is by the disembodied sounds of children’s laughing or the footfalls of tiny running feet. Employees and guests alike have also claimed that these children have the disconcerting habit of asking what they are doing, usually in a hushed whisper. What is quite odd about this particular haunting is that according to the hotel’s manager no children are on record as ever having died here. Nevertheless, the sounds of these ghostly children are one of the most commonly reported phenomena at the hotel, and EVP recordings of them have been captured by paranormal investigators as well.

The Mizpah Hotel had become so renowned for its hauntings that USA Today actually voted it the “#1 Haunted Hotel in America” in its Reader’s Choice Awards, and such is the curiosity generated by this in guests coming to look for the paranormal that many of the rooms are named for their resident ghost, complete with plaques that give a bit of information on the resident spook. It has become a haven for curiosity seekers and ghost hunters alike, and whether there are any real hauntings going on here the Mizpah Hotel is a curious little piece of history tied up with tales of the paranormal, still looking very much stuck in time with both the ghosts of its past and perhaps real ones as well.

YouTubers Arrested For Trespassing At Area 51