Located out in the George Washington and Jefferson National Forest of Virginia, in the United States, is a little lake and campground called Braley Pond Campground, just outside of West Augusta, Virginia. By day it is a tranquil place full of myriad fun outdoor activities including hiking, picnicking, mountain biking, camping, fishing, and horseback riding. Here there are pristine woodlands, a pond stocked with fish, and numerous meandering scenic trails through the trees and around the pond’s shore, and it is a popular outdoor recreation area for people from all over the state. Yet, there is a grim underbelly to this all, with a dark history of murder and death, and Braley Pond Campground has managed to accrue a reputation for being one of the most haunted places in the country, perhaps inhabited by dark forces.

Besides several suicides recorded from the area, one of the most horrific incidents that occurred here was a vicious murder in May of 2003, when 19-year-old Christopher S. Kennedy was lured here and stabbed to death by gang members, his body unceremoniously dumped into the water. According to the lore there have been other bodies found in the pond and the surrounding wilderness, some of them which were never identified, and so already the stage for this to be a haunted place is set, and indeed campers and hikers have supposedly reported all manner of strange, paranormal phenomena at the Braley Pond and its campground.

One of the most commonly reported phenomena at the campground is a sudden, sickening feeling of nausea and pure dread that will suddenly descend upon victims out of nowhere, only to stop just as abrubtly, and many hikers have complained about feeling an inexplicable sense of disorientation at times. Even more frightening than this are reports of the disembodied laughter of children along the area’s trails or of shadow figures and orbs of light. Some of the most frightening of this paranormal activity is supposedly concentrated around the pond, with apparitions seen both above and below the water, the sound of someone thrashing about in the water even though no one is there and swimming is not allowed, and the overwhelming sense of being watched. There have even been reports of people being overcome by a strange compulsion to go into the water, claiming that it felt as if something was calling out to them and beckoning them to do so. In some cases, people have described feeling as if something is worming into their minds, a kind of an impending insanity, and indeed one paranormal researcher from the Shenandoah Valley Paranormal Society allegedly went insane and committed suicide shortly after investigating the site in 2006.

Of all of the scary reports from Braley Pond Campground, one of the weirdest and most terrifying comes from a paranormal investigator and psychic sensitive by the name of Shea Willis, who visited the pond in 2003 along with a group of other amateur ghost hunters. She claims that upon arriving she immediately sensed that this place was heavy with a sense of fearful dread, which she felt was coming from an outside source and describes as “feeling something that belonged to someone else." As the group approached the pond she says that this feeling began to graduate in intensity and that it was sensed by the whole group, with a few of them becoming physically nauseous and unable to continue. Willis would relate to Charles Moss of The Dyrt of the effect this sensation had on her:

I was surprised by my reaction to it. It was definitely the strongest reaction I’ve ever had. And I’ve gone on thousands of investigations in some really strange places. I’ve been into places that, you know, six-foot, 250-pound men won’t go.

They decided to call off the investigation for the day, but Willis and fellow researcher Kris Arnold were intrigued, and returned to the area that evening at around 11:30 PM. Again that sensation of indefinable foreboding and dread began working its way into their minds, and Willis claims that she had the distinct impression that it was an intelligent presence, saying “I felt as though it was waiting for us. I [sensed] another presence ‘behind’ the original one. This one didn’t feel like the others. In fact, it didn’t even feel human.” As they walked over a bridge over the pond she claims that they saw a large, bright orb of green light in some trees, which suddenly vanished into thin air as a splashing sound began out over the murky waters of the pond that sounded like a person thrashing about, although they couldn't see anything. This is where things would get more bizarre still. 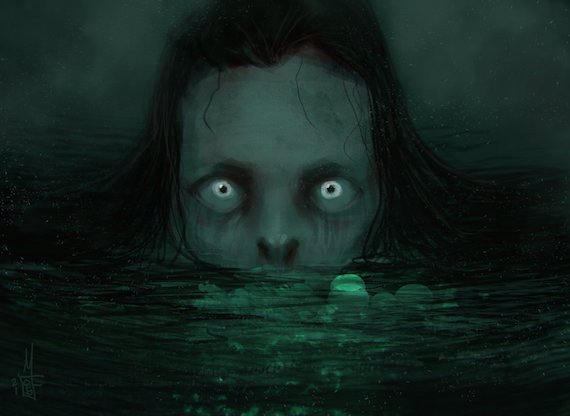 Willis says that Arnold began to panic and shout that something was coming for them, prompting them to make a hasty retreat. As they did, Arnold was then apparently shoved by some unseen force to go plummeting into the inky black water below, of which she says, “he literally flew upwards and to the left, as if something had hit him right in the middle of his back.” As she shouted out to find that Arnold was alright and unhurt, something then purportedly landed on Willis’ back to move along like a “two-foot-long inchworm” that she describes as feeling “as though it had some sort of tentacles.” As whatever it was began squirming around on her she panicked and ran back to their truck, where Arnold was waiting, sopping wet but still in one piece. She screamed at him that something was on her, but when he looked he could see nothing, even as she insisted it was still crawling all over her. She has claimed that for weeks after her ordeal she had vivid nightmares and visions, and explains that “It was like a communication with whatever this thing was. Like little bits and pieces of it were still stuck with me.” According to her, whatever it was had followed her back, and her son one night even claimed to have seen a man with soaking wet clothes and bloody holes in his chest standing in the shadows of his room glaring at him.

In the coming months Willis and Arnold made several other trips to the pond, and although there was nothing quite as intense as that night, they still experienced some odd things such as their batteries draining suddenly, strange lights, and one bout of lost time in which Willis went into a trance while exploring the area alone, only to snap out of it in the restroom near the parking lot with no memory of how she had gotten there. Willis would eventually feel the presence leave her, and she has wondered to this day just what the entity was. What in the world was going on here?

It is a spectacular and harrowing account to be sure, and it leaves one imagining what could be going on in this strange place and what significance the ghost hunter's report and the many other eyewitness accounts of odd experiences have. Is this a place haunted by ghosts or something else, perhaps dark forces with origins that are not human? Is the very land itself here imbued with some sort of energy, perhaps even evil? Or is this just urban legends, rumors, and tall tales? There is only one way to find out, and that is to take a trip out to Braley Pond for yourself, to enjoy the hiking and fishing by day, and perhaps entities from beyond our understanding by night.

Moon Madness: A Rare Full Moon Will Appear This Friday The 13th