The Curious Tale of the Man Who Made Ghosts

For centuries people have been seeing ghosts in many forms. The list of haunted places and specters going back through time goes on and on, and there are a fair few people who would probably like to see one for themselves, it would seem. The problem is that ghosts seem to be so inconsiderate to what we want, never appearing on demand, if at all. Well, what if you could just conjure up your own ghosts? This is exactly what happened to one eccentric inventor back in the 19th century, and it remains a wild ride right up into the present.

Back in the Victorian era there lived an eccentric British analytical chemist and inventor named John Henry Pepper, who became a member of the venerable Royal Polytechnic Institute London in 1848, going on to become its director in 1854. Pepper at the time was well known and regarded for his dynamic and entertaining lectures and demonstrations of all manner of new technological innovations such as mechanics, pneumatics, optics, heat, electricity, magnetism and electromagnetics, chemistry, and astronomy, and was thought of as sort of a scientific performer as much as a scientist. His goal was to inspire an interest in science and technology through entertainment and showmanship, and by all accounts he was very good at it. Pepper and his demonstrations became so popular that before long he was touring all over London, as well as in Australia and New York, where he wowed audiences and scientists alike with his spectacular displays.

In 1862, a booth was set up at the institute by relatively unknown civil engineer Henry Dircks, which caught Pepper’s attention. Dircks had managed to create a fantastic illusion that he called the “Dircksian Phantasmagoria,” which created amazing tricks of light and seemingly holographic projections that completely stunned and baffled those who looked upon them. It was all based on a concept first developed by the 16th century Neapolitan scientist Giambattista della Porta, who called it "How we may see in a Chamber things that are not," and involved using an array of glass, mirrors, and light to create the illusion that objects or people had appeared out of thin air on a stage. In this case, Dircks created the illusion of a “ghost” appearing right there out of nowhere on the stage, actually an actor who, in an act of lighting trickery, appeared to be a spectral presence, which enthralled audiences and Pepper alike. Dircks has tried to market this technology to theaters across England, but it had never panned out because the elaborate equipment needed required theaters to completely renovate the stage, making it to expensive to incorporate.

Pepper was fascinated by the weird effect, and after examining it he was convinced that he could pull off the same illusion with a simpler, and cheaper, set up. Both he and Dircks teamed up to work on the design and they were successfully able to greatly simplify the process but maintain the same eerie effect without any major refitting of the theater itself. They showed off the effect to an audience for the first time on Christmas Eve of 1862 during a stage scene of Charles Dickens's The Haunted Man, and the crowd went absolutely nuts. It was as if a ghost had actually appeared on stage to walk around right next to real physical actors, and the ethereal form was so convincing that some people actually believed it to be a real ghost. It was a major success.

The way it all works is by using tricks of light and ray optics, and requires a powerful lantern, a hidden room offstage, and a huge sheet of invisible glass or plastic film that is angled towards the audience. The glass would reflect the hidden room offstage, usually identical to the main room, with the “ghost” actor and all lit brightly enough to reflect off the glass and form a seamless composite image with the reflection of the hidden room and the room the audience was looking at. Since the whole stage was in the dark, no one would be able to discern the pane of glass and the illusion was akin to a hologram in a sense, with the actor’s form or other objects hanging there in space as a phantom, able to appear or vanish at will and totally immaterial. The key lies in the hiding of the glass, so that onlookers do not realize that they are essentially watching the reflection of another room superimposed onto the one in front of them. The lantern could even be angled so that it looked as if this ghost was growing or decreasing in size or floating about in space, and it all left the audience spellbound, with no one able to figure out how it was all being done. 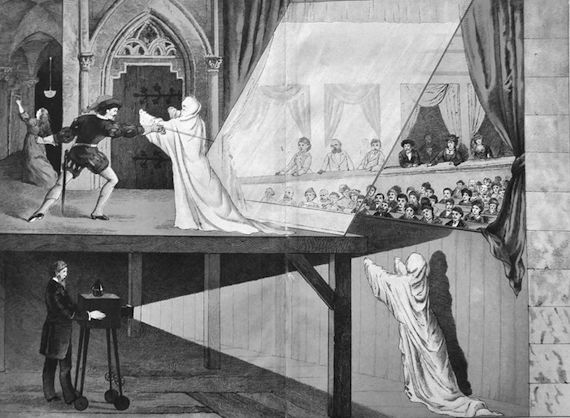 Considering what a jaw dropping effect it had turned out to be, Pepper and Dircks took the show on tour, where it began to be called “Pepper’s Ghost,” despite the fact that it had originally been the brainchild of his partner. This annoyed Dircks to no end, but since Pepper had been the one to perfect the technique he went with it, even giving full creative control and patent rights to Pepper. The trick worked an absolute charm, tricking even scientists and magicians, and apparently the great physicist Michael Faraday was so stumped by it all that he approached Pepper demanding an explanation.

While Pepper himself would pass away in 1900, his amazing trick of light would live on. It has gone on to be incorporated into all manner of performances and media, including movies, television programs, music videos, museum exhibitions, theater performances, musical concerts, carnival sideshows, and amusement park attractions. The most famous and large scale use of “Pepper’s Ghost” is arguably the Disney attractions “Haunted Mansion” and “Phantom Manor,” where visitors ride along in a cart while various seemingly real ghosts cavort about and even appear to sit in the car with the rider. When this attraction was first opened to the public it was a sensation, with people completely unable to process how what they were seeing could possibly be real. In more recent times the effect was famously used to spectacularly bring back to life famed dead rapper Tupac Shakur for a stage performance with living rappers Dr. Dre and Snoop Dogg at the 2012 Coachella Music and Arts Festival, and it was used to resurrect Michael Jackson as well at the 2014 Billboard Music Awards.

Considering that these artists were already dead when they appeared in this form, and that ghosts are in the end visual representations of the dead upon our reality, then these projected apparitions are in a way true "ghosts," and this is exactly what Pepper and Dircks wanted. It could prove to have ethical implications in the future, but for now it is amazing that even up to modern days we are using these techniques to resurrect the dead and fool the audience, and this remains a curious little piece of history. The case of these ghost makers is an odd little hitorical oddity that has continued to make its presence felt, and the ghost making continues on.

Latest Strange Sighting In One Of Oregon’s Many Haunted Locations