The Mysterious Unknown Woman of the Seine

A well known bane of artists and creative types everywhere is that of only becoming famous and popular after one's death. Lingering in life in a sort of unappreciated limbo, some people just seem to skyrocket to fame after they can't even be around to enjoy it anymore, and this is not even only for the artistic among us. In 19th century France there was a complete nobody who appeared out of nowhere, her identity totally unknown, and yet she has gone on in her death to be a powerful influence on art and literature in her passing, purely based on her angelic visage, and you may have even kissed her in a sense. This is the tragic and bizarre story of the Unknown Woman of the Seine.

The setting for this rather strange story is the River Seine of Paris in the late 1800s, during an era when the river was known as much for being a dumping ground for murder victims and a final watery grave for other corpses such as drownings and suicides as it was for its quaint bridges and picturesque cobbled riverbanks. Bodies being fished out of the Seine’s murky waters was commonplace, and most of these would be forgotten to remain nameless. However, in around the late 1880s one of these bodies would be pulled out of the river that would go on to have a stranger odyssey in death than most people have during their lifetime.

According to the tales, the young woman was perhaps around 16 years old, maybe older, and was of exceptional beauty. By all accounts her visage was peaceful in death, appearing as if she was merely sleeping, and not the victim of any sort of violent death. Indeed, there was no sign of pain, and she even appeared to have a slight, enigmatic smile on her face, as if she knew something we didn't. With no sign of trauma or violence on the body itself it was surmised by the Paris morgue that she must have died from suicide, but that was all they knew about the woman at the time, and that’s pretty much all we know about her now. The body was displayed, no one came forward to claim her, and so was prepped to be given a burial. At this time, one mortuary worker was apparently smitten with the beautiful visage of the dead woman, and so went about crafting a death mask of her face, a sort of plaster mold of the features of the dead for posterity, saying, “Her beauty was breathtaking, and showed few signs of distress at the time of passing. So bewitching that I knew beauty as such must be preserved.”

The resulting cast would go on in later years to be variously referred to by many names such as the “Bewitching Woman,” the “Drowned Mona Lisa,” and the L'Inconnue de la Seine, which translates to “The Unknown Woman of the Seine,” or simply known as the “Inconnue.” Such was the eerie beauty and inscrutable, calm expression on her face with that knowing half-smile, that the mask immediately became a popular must-have item, and many copies were produced over the years in order to meet demand. In most cases these macabre death masks were hung up in the studios of artists or writers, and it also became a popular and fashionable decoration for the mantelpieces of society’s elite. Now it must be understood that these were different times, when death masks held a morbid fascination for the populace, and a popular dark pastime was viewing bodies laid out at the windows of morgues in the hopes that someone would claim them, so it is not particularly odd that this unidentified woman’s death mask should be sold as a product for grim fascination. However, it is rather striking just how incredibly popular this particular mask would become.

The ethereal beauty of the mask made it not only a popular decoration for the artistic and the bourgeois, but combined with its alluring mystery it also became a muse of sorts for numerous artists and writers all over Europe and indeed the world, inspiring countless pieces of literature, poems, plays, and paintings. Hélène Pinet, of the Rodin Museum in Paris, has said of the woman’s enigma and the fascination she invoked amongst artists and writers, “It's a mystery with no leads. The facts were so scarce that every writer could project what they wanted on to that smooth face. Death in water was a very romantic concept. Death, water and woman was a tantalizing combination.” The writer Anne-Gaëlle Saliot, author of the book The Drowned Muse, says of the Inconnue’s mysterious and entrancing allure:

The Inconnue is like one of those images that appear to defy attempts at interpretation: it is at once familiar and eerie, dated and ageless; it has an air of déjà vu, while remaining mysteriously opaque. It is characterized by a visual intensity, a simultaneous radiance and concealment.

For young women, the mystery woman of the Seine became a paradigm of beauty, someone to be emulated, and it was not uncommon at all to see women copying her hairstyle or otherwise trying to look like her. This was apparently at its height between the World War I and World War II, and it was only when Greta Garbo became all the rage that the Woman of the Seine would be usurped from her position as the ultimate role model of beauty. 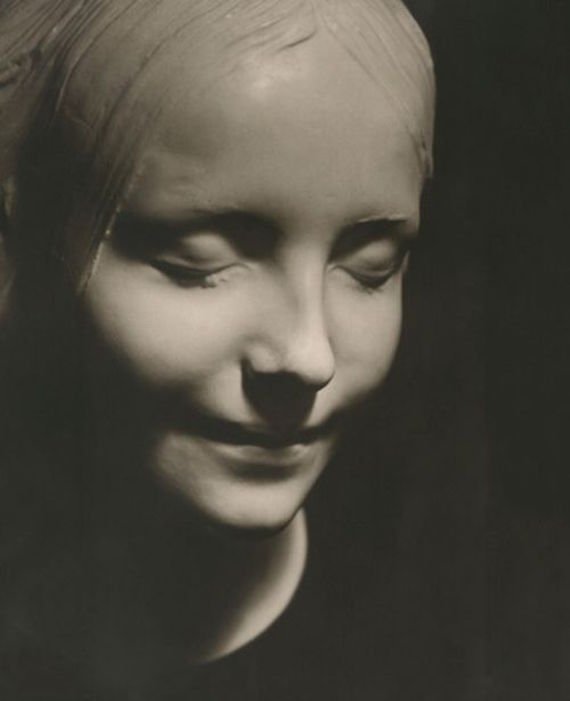 Even odder than women seeking to look like an unknown dead woman is what would happen in the years after World War II, when a toy manufacturer from Norway by the name of Asmund Laerdal was experimenting with making toys out of this newfangled material called plastic. He would go on to create the super popular “Anne” doll, a plastic doll with a life-like face and hair which was a sensation at the time and the reason why he would be approached by a group of medical professionals who wanted him to create a life-sized plastic doll that could be used for practicing and demonstrating a new resuscitation technique that we know as CPR. Not only was Laerdal a doll making specialist by this time, but he had also nearly lost a son to drowning, so he immediately agreed.

As he created this new CPR doll he worried about what face to give it, and ended up using the likeness of the Woman of the Seine because he had seen it hanging in his in-law’s house. The result of his years of effort was a life-sized mannequin with open mouth, collapsible chest, and L'Inconnue's face, which he named Resusci Anne (Rescue Anne), or also known as Rescue Annie in the U.S. The doll was released in 1958, and went on to become so amazingly widespread as a training tool for CPR that Rescue Annie is often touted as having the “most kissed lips in history.” It is rather odd that millions of lives have been saved by practicing mouth to mouth on the likeness of an unidentified dead woman pulled from the Seine River more than a century before CPR was even a thing, and it only adds to L'Inconnue's strange saga. The CPR doll Resusci Anne is still produced to this day by Laerdal Medical, and chances are if you’ve ever learned CPR then you have kissed her face as well.

It is amazing the sheer influence and heights of enduring legend that this unknown drowned woman has propelled herself to in death, and making it all odder is that we still have no idea of who she was. In fact, there has even been doubt cast on whether the story of her dying and being fished from a river is even totally accurate or not. The main contention on this lies in the fact that her death mask just simply doesn’t seem to be that of a dead person, especially one who has drowned. In drowning deaths one would expect bloating and damage or distortion to the features, but with L'Inconnue there is none of that, her skin and features are flawless, and indeed she seems to be merely peacefully sleeping. One researcher of L'Inconnue named Claire Forestier has said of this:

Look at her full, rounded cheeks, her smooth skin. There is simply no way the cast could have been taken from a corpse. And this is certainly not a drowned woman, fished from the water. It would be impossible to take such a perfect face from a dead woman. Some casts taken from living faces are so clear, so detailed, that when you look at the eyelids you can just see the eyeballs' movement underneath. That's the case with the Inconnue. I'm sorry. The Inconnue was not dead; more than that I can't say. My only guess is perhaps the girl who sat for the mask drowned herself years later? But I've got no idea and we'll never know.

The idea here is that the cast was perhaps taken of a molder’s daughter or some other young model, perhaps even a peasant girl passing through, which explain her anonymity. However, others have argued that the death mask could have certainly been taken from a dead girl and then sort of spruced up later to make it look better. There are other theories as well, such as a popular tale that the mask was made of a molder’s mistress who committed suicide in the Seine when she had a stillborn baby. It is hard to say, as the woman’s remains were supposedly buried in an unmarked pauper’s grave and there seem to be no police records of her. Who was the mysterious Unknown Woman of the Seine and how is it that she managed to become such an icon and muse after her supposed death? It is a rather amazing story that this unknown, unidentified woman, who has never had a single person come forward knowing who she is, should go on have such an impact in death that she never had in life. It is rather spooky that she should be so forgotten by those who knew her and that she only became a legend as an unknown, nameless face, and the mystery of the mysterious Unknown Woman of the Seine and her strange, otherworldly allure will undoubtedly live on.