The Mystery of the “Box of Crazy” Found in a Dumpster

We sometimes find some strange things just lying around. How many of us have stumbled across a strange object lying abandoned, sometimes even something of value? These are the little discoveries that pop into our lives from time to time, and mostly we just shrug our shoulders and get on with our day. Yet sometimes there are things uncovered that go beyond the merely odd, to catapult themselves firmly into the realm of the truly bizarre. Such is the case of a strange wooden box found discarded in a dumpster, which held all manner of unexplained oddities and anomalies, and has gone on to become a much-discussed unexplained mystery.

The whole strange tale ostensibly starts in 2013, when a man named Dan Wickham came forward and claimed that his friend had found something rather strange in a dumpster in Asheville, North Carolina in 2008. There lying amidst the trash was a worn out old handmade wooden box measuring roughly 29″ by 38″ and with hinges, a metal handle, and locks on it, the whole of it purportedly smelling like “basements and dampness.” There were no markings on the exterior and it was largely unremarkable for the most part, something most people probably would not even have noticed. A check of the lock showed that it was secured, and after a few moments of debating with himself on whether to leave it where it lay or not curiosity won out and he took it home to try to see what was inside. It would turn out to be far stranger than he had ever imagined, to the point where he would send it to Dan to see what he thought. 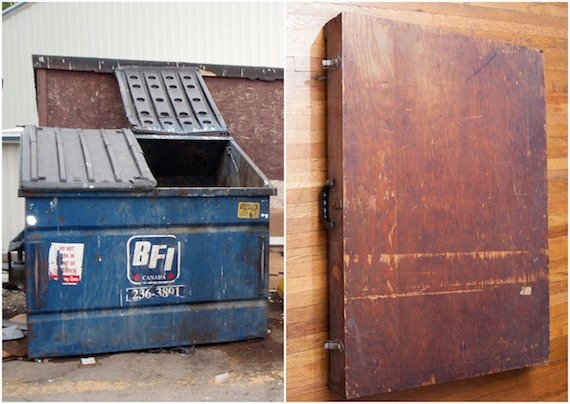 When Dan received the box he opened it to find what he called “a whole box of crazy” within. There within the box were stacks and stacks of papers containing a mixture of typed text and scrawled handwritten notes, as well as reams of diagrams, drawings, and indecipherable geometric designs that were outlandish to say the least. One type of drawing found within were those of all manner of fantastical and at times nightmarish creatures, in particular biblical creatures from the book of Ezekiel, as well as numerous depictions of angels and four-headed seraphs with double sets of wings, humanoid creatures with the heads of animals, flying dragon-like creatures, and various other strange beasts or aliens that are hard to really categorize. There are also sketches of nude people and other things, and while most of it displays great artistic skill in a variety of styles there are also childish scribbles and stick figures scattered about.

There were also many drawings of what appear to be aliens and UFOs, sometimes mashed up with all of the religious imagery and the menagerie of monsters, as well as numerous diagrams and schematics of strange flying machines and other various contraptions such as a Special Railroad application roller bearing with a handwritten note designating it as able to withstand a “considerable axial load,” turbo jets, holograms, retractable spotlights, and more, many ahead of their time and all showing a surprising level of technological and engineering know how. Some of the machines and inventions are even marked as patented, although no records have ever been found that they actually are, and making it even stranger still is that some of these designs are dated from the 1930s. There is also a painstakingly hand drawn periodic table of the elements, geometric designs that seem to have no discernible meaning, as well as so, so many maps, also dated from the 1930s and most of them meticulously drawn by hand. These maps are baffling, as they seem to have aerial patterns and air travel routes of some sort outlined onto them, they mostly focus on the Morocco and Algeria border, and all of them have an anomalous pin hole right in the center. Why? Who knows?

Just as strange as any of these mysterious diagrams and drawings are the diary entries and text interspersed between them, which ranges from somewhat odd to completely bonkers. At one point there is a thick stack of documents about a UFO sighting and study conducted by the Aerial Phenomenon Research Organization, after which the writer describes in scrawled handwriting a sighting of a UFO he had in 1977 outside of Tampa, Florida, accompanied by a sketch of a UFO and a tornado entitled “Touch-down of the Tampa Bay Tornado.” There are other supposed encounters with UFOs and aliens through the 1960s and 70s to be found, as well as rambling musings and reflections on the writer’s beliefs on religion, UFOs, astral projection, and strange weather patterns, and it is all rather perplexing, even more so because no one has any idea who the artist and writer is except for a few pages signed with the name “Daniel Christiansen.” You can see a bunch of pages from the box here.

Taking it even deeper down the rabbit hole is that when Dan released what he had found on Reddit a woman would step forward claiming to have much more to the story. She says that the whole affair had actually started in the 1990s in Florida, where she had rented out a cheap house only to find it a cluttered mess full of stuff the previous tenant had left behind. Who was the tenant? Why, Daniel Christianson, supposed author of the “box of crazy.” Christianson apparently left the place in quite a state, as Dark Matter News explains:

She described Daniel Chistianson’s home to me as filthy, cluttered, and strange to say the least. In the living room there was just one single desk sitting alone with no other furniture around. Along the rest of the house were books about out of body experiences and other strange works, as well as mounds of drawings, writings, papers, charts, blueprints… The list goes on, and according to her, the box that we’ve clung to as the collection of DC’s works is “not even one tenth of a percent of what was in that house.

The woman says that among all of the utter bizarreness in that house was that wooden box sitting out in the garbage outside, and she weaves a weird tale indeed. She claims that not long after finding the box her and her friend were frightened to see two “men in black” peering into the window at them one day, causing them to flee, but when they came back the men were gone. She says she threw the case away out of fear, but explains that some her friends secretly kept it. Dark Matter News says of this:

Fast forward several years later and she walks into a friend of her’s home and freezes upon the sight of one of DC’s paintings hanging on the wall. In her shock, her friend explains how he got it when some buddies were throwing things out of this crazy guy’s house. Upon finding out that she was the original owner the friend gives the box and some other contents back to her… So the box found its way back to her. Now older and less afraid, her and her husband took more time to figure out what these things were. It became a conversation piece in their home, as you could imagine. She’s had a couple of pastors and engineering students look at it and their reactions were always amazement. The terminology and density of the writings made it too difficult for them to decipher though.

She allegedly took the box back and hid it away in her basement at her new home in North Carolina, but when she moved to a new place she somehow forgot to take it. When she contacted her landlord to get it back she was informed that everything left behind, including the mystery box, had been thrown out already. Enter Dan’s friend, who happened to pass by the dumpster and find the case, before eventually passing it on to Dan. This witness claims that she is not only still in possession of some of the contents of the box, but also that within these notes are plans for how to build a time machine, and that the diagram included with these plans reminded her of something that had been found in Christianson’s room, described as “a machine, a large wooden craft” with a seat and slots perfectly carved out as handles, and according to her the “machine” looked “well used”. According to her, the notes she has “describe in detail how to build this machine, how to time travel, how to have out of body experiences, what diet to eat to prepare yourself to travel, you name it.” What is going on here? Is any of this true or is this just a tall tale inspired by that bizarre box? What is the deal with this box?

Ever since the story of the Box of Crazy from the dumpster got out into the wild on Reddit it has generated all manner of debate, discussion, and theories that continue on unabated and without full, satisfactory answers. What does it all mean? Where did it come from? Why was it all created in the first place? The many ideas put forward include that Christianson had had real alien encounters, perhaps with some mental link to them influencing his creation of the contents of the box, or that he somehow traveled to another dimension, as well as the idea that they are just an art project or work of fiction, that it is some kind of manifesto, or that it is simply the deranged ramblings of a crazy person. There is also the question of why he would stuff all of this material in that old fashioned wooden case and just throw them away. Of course the possibility has been pointed out that this is perhaps all a hoax, either perpetrated by Christianson himself or by Dan Wickham, who might have totally made up the whole thing. In the end no one really knows, and it continues to be a very weird puzzle that has not yet been adequately solved.

Bigfoot May Have Scared Driver Off Road in Kalamazoo, Michigan