The Mystery of the Nebra Sky Disk

History is far from completely chronicled. For as much as we know there is much that still remains in the shadows, and popping up from time to time to remind us of this fact are the various anomalous objects that we dig up that jolt out preconceptions and show us that ancient peoples were much more complex and stranger than we had ever thought before. One of these objects was found in the country of Germany in the 1990s, and it has proven to be a conundrum that defies our knowledge of the people of the time, and has gone on to become an intriguing historical anomaly that remains unsolved.

The artifact could have very well remained hidden away from the eyes of humankind forever if it hadn’t been for some illegal treasure hunters snooping around. In 1999, Henry Westphal and Mario Renner were hunting for treasure with metal detectors in Ziegelroda Forest, of the German state of Saxony-Anhalt, near a town called Nebra, when they stumbled across two bronze swords, two hatchets, a chisel, some fragments of what appeared to be bracelets, jewelry, and most interesting of all, an anomalous bronze, disc-like object measuring 30 cm across, weighing about 5 pounds, and covered with strange inscriptions and cryptic diagrams and writing, some of which was inlaid with gold leaf, as well as gold circles, crescents, and bands upon it, the significance of it all unknown. 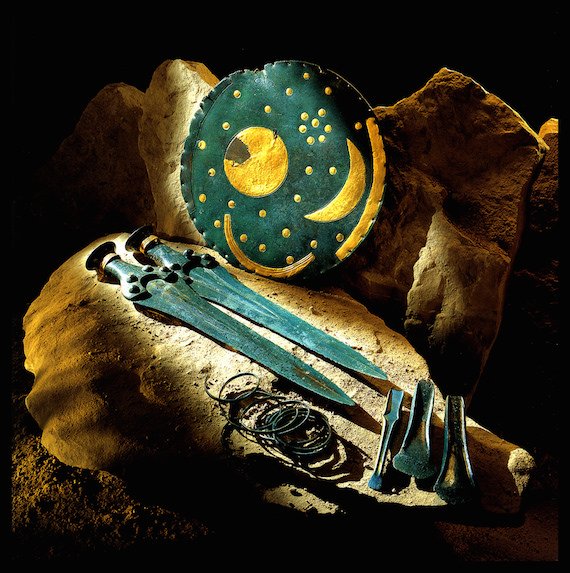 Now, none of this was legal at all. Not only were Westphal and Renner operating without a license, but they were using metal detectors, which was not allowed, and also any treasure found in the area is automatically the property of the state of Saxony-Anhaltof, but they had no intention of handing their hoard over. The two illegal treasure hunters had no idea what the disc was, only that it was old, had gold in it, and was therefore potentially valuable. The very next day after making their find, the two sold the whole lot on the black market, and the mysterious disk would sort of disappear into the world of illegal treasure trading for the next few years. The disk and its mysteries might have disappeared forever, just as elusive as it had been when buried under the earth, if it wasn’t for a black market police sting operation carried out in February of 2002, during which it was confiscated and found its way into the hands of the German archeologist Harald Meller. Only then would it become clear just how bizarre the discovery actually was.

The two original treasure hunters were tracked down and arrested, and under a plea deal they agreed to disclose where they had found the disc. It turned out to be some sort of ancient burial mound thought to date back to the 2nd millennium BC, within which were found various other bronze artifacts and which was found to be situated on the hill in just such a way as for the sun to set behind a high peak called the Brocken during every solstice. However, even more exciting than the site where it was found was the disk itself, which had golden arcs that aligned with these solstices, and this was only the beginning of its mysteries. The symbols inscribed upon it were found to be depictions of the sun, moon, and a constellation of stars thought to be Pleiades Constellation, and when aligned correctly it was found that the disk could be used to calibrate the solstices and provide accurate representations of the night sky over the course of the year. Using two arcs on the edges of the disk, it was found that they span an angle of 82°, which accurately indicates the angle between the positions of sunset at summer and winter solstice at the latitude of the Mittelberg.

The disk was also able to correctly calculate moon phases and the location of stars in the sky, and all in all it was an amazingly accurate tool for its apparent age, perhaps the oldest known depiction of the universe. Of course,  considering its accuracy, age, and the fact that its artistic style was not consistent with what was known from the era it supposedly belongs to, it was thought that what has come to be known as the Nebra Sky Disk was nothing more than a hoax or forgery, and prehistory professor at the University of Bristol, Richard Harrison, would say of it:

When I first heard about the Nebra Disc I thought it was a joke, indeed I thought it was a forgery. Because it’s such an extraordinary piece that it wouldn’t surprise any of us that a clever forger had cooked this up in a backroom and sold it for a lot of money.

However, analysis showed that it indeed seemed to be authentic, dating back to at least 1600 BC, quite likely much older, and likely a creation of the Bronze Age Unetice culture, and it was also found that it had been modified and tweaked over the centuries, adding new holes, crescents, arcs, and bands, perhaps as the creators attempted to calibrate it more precisely. If the calculated age is correct, then this would make it the oldest known and most accurate portable astronomical tool in the world for its era, and demonstrates that the people who made it had a shockingly sophisticated understanding of the cosmos and cycles of the night sky.

One of the biggest mysteries of the Sky Disk is not only how these ancient people knew so much about the night sky, but also what exactly it was used for. Ideas include that it was an item of religious significance, that is was used to anticipate seasonal phases for planning harvests and other agricultural purposes, or that it was used for shamanic rituals, but no one really knows for sure, and there is absolutely no written record of the disk having been made or where it came from. We are still not sure how these ancient people had this knowledge all the way back in the Bronze Age or even exactly who made it in the first place, and the Nebra Sky Disk has gone on to be a much discussed historical anomaly. How did they have all of this information in a violent era when most of the artifacts found are weapons? Was it aliens? It was aliens, wasn't it?

Whatever the answers may be, it is often considered as being one of the most important archeological finds of the century, and in 2013 was in the UNESCO Memory of the World Register. Nowadays the Nebra Sky Disk has remained on permanent exhibition at the Halle State Museum of Prehistory (Landesmuseum für Vorgeschichte), in Halle, Germany, and it is considered a priceless artifact of German archeology. For now the Nebra Sky Disk keeps its mysteries close, but it provides a rare glimpse into ancient peoples and their understanding of the cosmos, which has proven to be much more complex than ever thought before.