The Mystery of the Sayhuite Monolith

Truly one of the great lost civilizations of the earth is the Inca Empire of the Andes Mountains of Peru. At its most powerful and illustrious during the 14th and 15th centuries, the Inca Empire at one point stretched over a vast area encompassing parts of Ecuador and as far south as Chile. For centuries this great civilization thrived, only to melt away into history with the coming of the gold-hungry Spanish conquistadors and fade away into the mists of time, leaving behind no record of their culture and way of life and making them one of the most enigmatic of ancient empires. Yet, for all of their mysteries some are more pronounced than others, with outlandish artifacts for with purposes unknown uncovered at times., and one of the more baffling of these is a monolithic stone which we are nowhere near figuring out.

Although the Incas left behind no written record for us to draw from, what they did leave are vast structures that remain standing strong centuries later. From temples, to citadels, to strongholds, massive walls, and roads, these ancient structures made use of enormous stones somehow moved to these locations and placed perfectly straight without any mortar and through methods we still don’t understand fully. In addition to these architectural mysteries the people of the Inca era also left behind other oddities that pop up from time to time, which serve to pose more questions than answers. One of these lies in the province Abancay in the region Apurímac in Peru, and has been wreathed in mystery ever since its discovery. 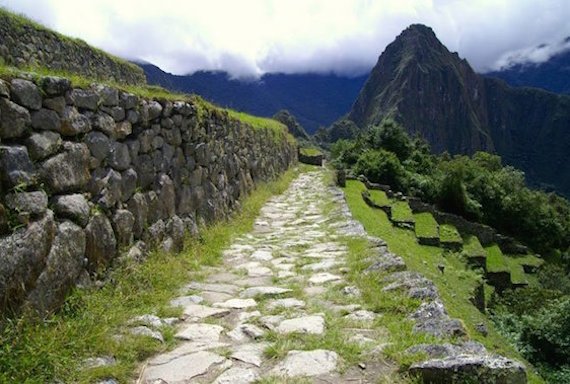 The site is called Sayhuite, thought to have perhaps once been the site of a grand gold covered temple devoted to the worship of water, and here is a rather bizarre artifact looking quite out of place. Called the Sayhuite Monolith, it is an enormous boulder measuring 6.5 feet long and about 13 feet wide, which sits atop a raised platform upon a terraced hill called the Concacha Hill, but more bizarre than its sheer size is what is engraved upon it. The entirety of the upper surface of the rock is adorned with over 200 carvings and engravings of various zoomorphic and geological figures, including reptiles, jaguars, monkeys, shellfish, frogs, crabs, birds, terraces, ponds, rivers, tunnels, streets, stairways, channels, buildings, and irrigation canals, and many others, as well as numerous geometric figures, all incredibly intricately crafted in painstaking detail.

It is a breathtaking piece of artistic mastery for its day, but the thing is we have no idea of what its purpose is, exactly where it originated, or even it was the Incas who made it at all. One of the problems is that there is very little else remaining from the Inca Empire at this particular site, no frame of reference to give it. We do know that it is not a natural outcropping, and is made of material not sourced from the immediate area, but it is unclear where it was moved from or if this was even its original intended resting place. That is about all we know for sure, and no one is quite sure who made it or why.

As to the carvings, your guess is as good as anyone’s, and their significance depends largely on who you ask. One popular theory is that this was once an Inca temple devoted to the worship of water deities, which would have in its day been full of grand, gold coated columns and featuring the monolith as some sort of object of religious significance. However, this is far from the only idea floating around. Another theory is that the stone was used as a way of developing and testing the intricacies of water flow for public water projects and irrigation systems, supported somewhat by evidence that the engravings show signs of having been altered, modified, and updated over the centuries, perhaps to test out different water paths on the topographical model. Other ideas include that the monolith is a map to a lost city or even a map of the Inca Empire, a model of the universe, or even an alien artifact. In the ends no one knows, and although the site is popular with tourists we are no closer to understanding it all, its history lost to time, just one more piece of the puzzle of a time long lost to us.

The Strange and Ancient Tale of a Welsh Dragon