The New Plan to Bring Back the Hindenburg Without the “Oh, the Humanity!”

“It is bursting into flames … This is terrible. This is one of the worst catastrophes in the world … Oh, the humanity!”

Those last three words – familiar to many who may not know who said them nor why -- were uttered on May 6, 1937, by journalist Herbert Morrison as he watched German passenger airship LZ 129 Hindenburg catch fire as it was docking at the Naval Air Station Lakehurst in New Jersey. (This was before WWII.) The ship was destroyed and 36 people died – passengers, crew members and one person on the ground – a number by today’s mass death standards is low, especially since most of the 36 passengers and 61 crew members survived. 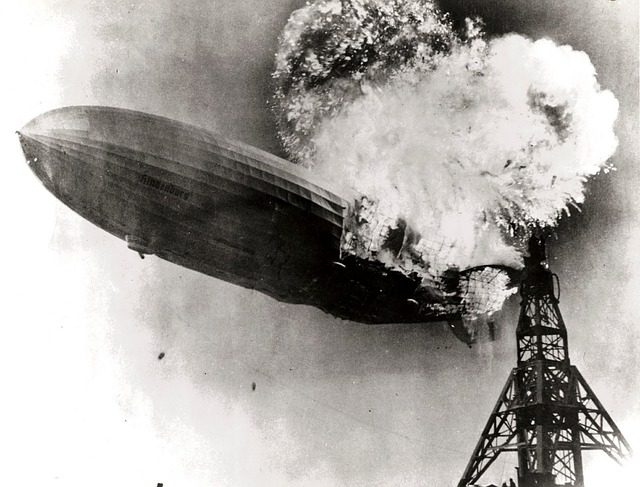 However, that accident and horrific newsreel coverage (the viral video of the day) swiftly ended what had, until that point, been the most cost-effective and least polluting method of transporting cargo. In fact, it still is. That’s why researchers who have figured out a way to make hydrogen-filled zeppelins a mile-and-a-half long are now scrambling to get them airborne despite the 80-year-old memory of a single accident. Did he say “a mile-and-a-half long”?

“They used to use cow intestines to build the gas bags.”

Julian Hunt, a postdoctoral fellow at the International Institute for Applied Systems Analysis in Laxenburg, Austria, and lead author of the research paper on these new hydrogen airships published in the journal Energy Conversion and Management and reported in ZME Science, describes the funniest out of the many improvements these new hydrogen airships have over the Hindenburg. Carbon fiber and other modern ultra-light yet ultra-strength materials would replace the cow intestines, while onboard computers and sensors would replace the crew, making these new ships completely autonomous.

On the other hand, some things haven’t changed. The new zeppelins would still be filled with highly-flammable hydrogen. As anyone planning a balloon-filled birthday knows, the world is running out of helium. Hydrogen is renewable, lighter than helium and could also power onboard fuel cell to power the ship’s propulsion system. The byproduct of that is not CO2 but water, which could be dropped over drought areas. The new zeppelins would also take advantage of the free natural propulsion system known as the jet stream, which the study calculates could help them deliver cargo faster than ocean ships and to places that even highly-polluting trucks can’t reach.

Yeah, but what about “Oh, the humanity!”?

“I see no technological hurdles that cannot be overcome. It is really more a question of regulatory hurdles.”

Barry Prentice, president of Winnipeg, Canada-based Buoyant Aircraft Systems International – a builder of airships – tells NBC that the sophisticated navigation systems of today using the sophisticated weather tracking systems of today (not perfect, as hurricane Dorian proves, but much better) will enable the new giant zeppelins to quickly steer around turbulence and dangerous conditions. Combined with the speed of the jet stream, one of these new hydrogen haulers could haul more than 20,000 tons of cargo around the world in two weeks. Prentice, Hunt, the other authors of the study and zeppelin builders looking for investors know that all of this pushes humanity out of the way as the people who influence and control the regulators realize, “Oh, the huge profit margins!”

“It is estimated that 1125 airship hydrogen carriers would be able to transport energy equivalent to 10% of current world electricity consumption. The possibility of cheap and clean transportation of hydrogen would be convenient for the implementation of a global hydrogen economy. This would ultimately support the widespread adoption of intermittent renewable energy technologies, such as solar and wind, and promote sustainable development on a global scale.”

The study throws in the noble causes of clean energy and the potential to switch from carbon-based power generation to hydrogen fuel cells, but the real thing that will launch airships five times longer than the Empire State Building is tall is the amount of cargo they can haul. Profits over people. Perhaps that will be the reason some future newscaster cries:

“This is terrible. This is one of the worst catastrophes in the world … Oh, the humanity!”

A Story of the Abominable Snowman: Fiction or Fact?