The Outlandish Encounter of the Ellen Austin

The sea has always held great mysteries that have often become legends, unsolved and proving what a vast, unexplored realm this is. Ever since our kind has set out upon the waves towards that horizon we have met with things we can't explain, and the list of mysteries at sea is long indeed. Adding to the lore of great sea enigmas is a case that comes to us from the 1800s, when a ship would have an encounter in the Bermuda Triangle that remains truly strange and unexplained to this day.

The 210-foot-long, 1,812 ton three-mast schooner named the Ellen Austin began its long career in 1854, when it was built at a shipyard in Damariscotta, Maine. Throughout its history it served a variety of purposes, and in 1856 it became a packet ship for the Patriotic Line under Captain William H. Garrick, mostly operating between Liverpool and New York City. These were dark years for the vessel, as it was increasingly under fire for reports of alleged abuse, torture, and brutality dealt out by the Captain Garrick, charges which were later dropped, and the Ellen Austin continued on as a shipping vessel under Garrick’s command. However, numerous reports continued on that the ship’s officers often abused, tortured, or beat crew members or the numerous emigrants it often ferried from England to New York, to the point that in 1859 The New York Times proclaimed:

The officers of the Ellen Austin have a very unenviable notoriety for alleged cruelty to their men, and that the vessel has scarcely ever entered port without complaints being made in our Police Courts against them for cruel and inhuman treatment. 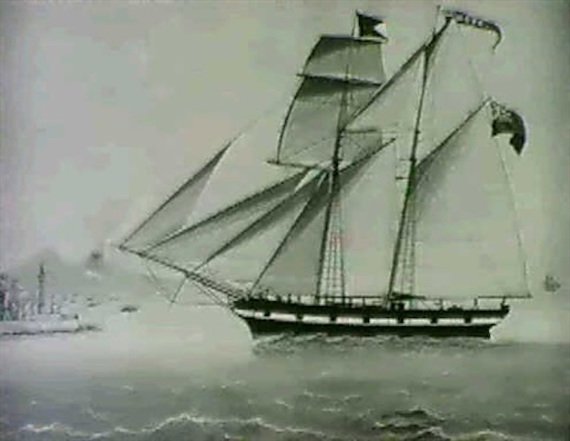 At the time Henry Garrick was still Captain of the Ellen Austin, and he still managed to avoid any repercussions and remained in command until he retired and the ship came under the command of Capt. A.J. Griffin in 1874. It continued dozens of runs between England and the United States and later between New York and San Francisco, and had many harrowing experiences such as collisions with other vessels and damage by storms. This is all certainly a colorful history, and is known to be fact, but in 1880 the ship would embark on allegedly one of its strangest journeys, which would wreath the vessel in mystery, and the exact facts of which have been debated and discussed to this day.

On December 5th, 1880, the Ellen Austin departed on its usual route from Liverpool bound for New York on what was to be its final journey as a packet vessel. The trip went according to plan until they reached the Sargasso Sea in early 1881, where they would spot a listless schooner eerily floating about in foggy open water seemingly under no control. Rather than move in immediately, the captain was suspicious that this might be some sort of pirate trap, and so they observed the mystery vessel for the next two days from afar, watching it continue about its erratic, meandering course until it was deemed safe to approach.

The Ellen Austin moved in towards the seemingly derelict vessel through a thick, soup-like veil of fog, and all attempts to hail it were met with silence, that spooky hulk without any discernible life. It was decided to send out a boarding crew, and considering that the seemingly well-maintained and valuable ship was just sitting out there, it was still suspicious enough that they went in armed. They boarded to silence, no pirates lurking in the shadows to engage them, no one period. The ship seemed to be completely abandoned, lifeless, although oddly there was no sign of any struggle and nothing appeared to be missing other than the Captain’s log and strangely the vessel’s nameplates. Personal belongings were there, the food rations were there, even the cargo was still there and fully intact, a precious load of pure mahogany wood that would have been worth a small fortune. Why would the entire crew just leave it all behind? No one knew. 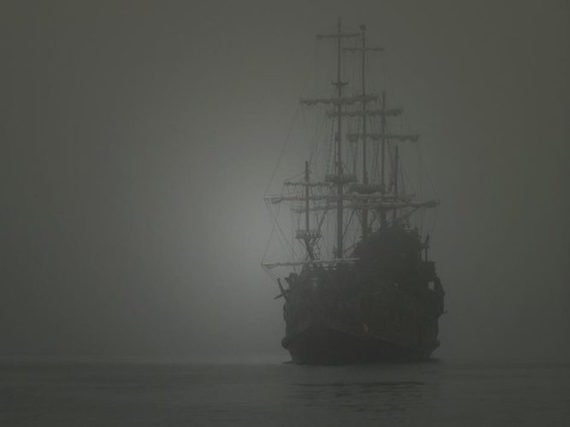 Considering nothing had been stolen and the ship was undamaged and fully functional, it was apparently decided that the crew must have been forced to evacuate suddenly, although why was not clear. With the valuable cargo and the expensive ship, it seemed a salvage opportunity almost too good to be true, and a prize crew was put aboard it and instructed to sail it to New York, where they would head together in tandem and figure out how to proceed. This went smoothly at first, but a sudden and violent storm separated the two ships for the next two days, after which the skies cleared and the water became placid and calm, yet a search of the horizon in all directions found no trace of the derelict vessel they had been with. It had simply vanished.

It would not be until the next day that contact would be made with the missing ship, when it was finally spotted on the horizon and found to be seemingly drifting once again. When the Ellen Austin approached, the crew they expected to come out and greet them was nowhere to be seen, and once again the vessel was searched to find all belongings left behind but no sign of the men. Oddly, the second logbook that had been left with the missing crew was missing just as surely as the first one. It was spooky to be sure, and the crew of the Ellen Austin, superstitious seamen that they were, came to be under the impression that the mystery ship was cursed, and that they should leave it where it was to continue its aimless course into the vast expanse of the sea. The Captain considered this, but that cargo was so valuable that greed won out, and he went about putting another crew aboard.

Getting a new team aboard that ship was apparently no small feat, as the men were too terrified to go anywhere near it, but the Captain was finally able to convince some of them to take the challenge by offering them weapons and saying that they would stay in very close proximity. He was adamant that the same thing could not possibly happen again on his watch, and so a few wary crew men accepted the new post. And so they headed off again, keeping almost dangerously close to each other as promised, yet once again things were about to take a turn for the weird. 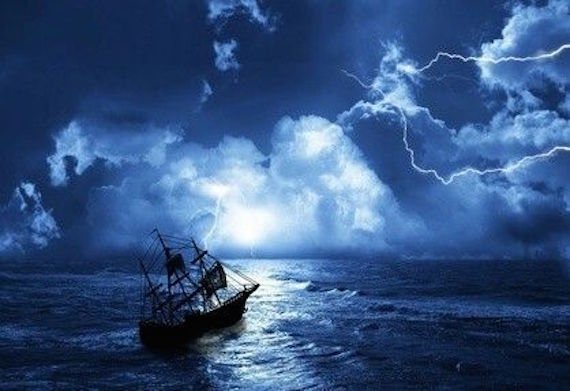 According to the story, although the sea was calm an impenetrably thick fog rolled in out of nowhere to make visibility virtually nonexistent, and despite their close distance the two vessels once again lost sight of each other. The Ellen Austin spent some time scouring the fog looking for any sign of the other ship, but it was gone and visibility was so poor it seemed impossible that they would see anything until the fog lifted. When it finally did dissipate just as suddenly as it had descended, it did so to reveal clear horizons with no sign of the ship. It had vanished once again. This time the spooked Captain and crew did not stop to look for it, instead heading on to New York as planned, after which the Ellen Austin would retire from packet service and be sold to a German company.

The strange story of the alleged encounter with the ghost ship and the missing crew would first come to the public consciousness with an article in The Daily Deadwood Pioneer Times in 1906, after which the story was circulated in other sources over the years as well, including a radio broadcast in 1935 by Lieutenant Commander Rupert T. Gould, who claimed that he had spoken with other seamen who had heard the story first hand from actual surviving crew members of the Ellen Austin. It was this radio broadcast that would truly launch the bizarre tale into the realms of legend, and it was so popular that Gould would write of it in his 1944 book The Stargazer Talks. Considering the location of the alleged events, it would go on to become one of the most compelling and mysterious cases of the Bermuda Triangle, inciting discussion and capturing the imagination for years to come. 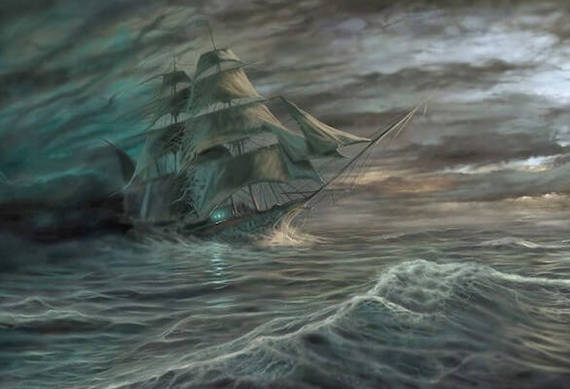 Over the years the story would grow to be told and retold by numerous sources, and unfortunately different versions would begin to circulate and details and facts would see modifications, for instance, some reports mentioned only one crew vanishing while others said it was two, the presence of the mysterious fog was absent in some versions yet played up in others, although the missing logbooks and nameplates are a common thread. With so many retellings it has become very hard to piece together what actually supposedly happened and how much of it was exaggerated or fabricated, all made even more frustrating as there doesn’t seem to be a wealth of independent official sources or records to concretely verify any part of it.

For these reasons it has become nearly impossible to separate fact from fiction on this spectacular case, and there is very little we can say for sure. According to a vague handful of records from Lloyd’s of London, among the only official sources, we can be sure that there really was a packet vessel called the Ellen Austin that operated between New York and England in that time frame under the command of an A.J. Griffin. It is also fairly certain that the Ellen Austin did set sail for New York from Liverpool in December of 1880. There was also apparently mentioned in records of a derelict vessel really found with a load of mahogany, although it is unclear where it was encountered or exactly when. Other than that there is very little in the way of concrete verification for any of the other more mysterious elements of the story, and no way to tell which version of the story is true. What happened to that vessel and the Ellen Austin out there? It is quite likely that this is all a spooky yarn mixed in with real facts, told by seamen over the years and embellished with sensational news reports and Gould’s account in later years, but there is no way for us to really know, and the mystery of the Ellen Austin remains talked about and one of the strangest Bermuda Triangle cases there is.