Throughout history there have been countless people who have stepped forward claiming to have unique amazing abilities, skills, or powers that make them exceptional. It is unfortunate that in many cases these cannot be independently confirmed, and in still others these people and their abilities seem to just become lost to history to leave us wondering whether any of it was true or not. One such case is that of a Frenchman back in the 18th century, who was said to have an amazing ability that made him invaluable to his countrymen and which has not satisfyingly been explained to this day.

Our story revolves around a man by the name of Étienne Bottineau, who in the 1700s was stationed on the island of Mauritius with the French East India Company. He was mostly just a minor member and engineer, and there was not much special about him at first. He was someone who could very well have disappeared into the mists of time and become another forgotten person in history if it were not for a remarkable and very unusual skill that he claimed to have developed, which he called nauscopy. This talent consisted of being able to predict the appearance of ships far from shore merely by looking at the horizon line, and not only could he allegedly accurately tell how many ships would arrive, but when they would appear, how far apart they were, and even how large they would be, and such was his ability that it is said he could see these ships coming from up to 900 miles from shore. It was all rather remarkable, especially since he needed no special equipment, just his own two eyes, and as this was an era before radar or powerful telescopes he began making a name for himself based on this strange ability.

In his early days of perfecting his mysterious skill it was mostly treated as a parlor trick by Bottineau. He would frequent bars and taverns making bets with sailors on how many ships would appear off shore and when, often correctly predicting the size and number of ships days before their actual arrival. He apparently got so good at it that he was considered to be infallible, and no one could figure out how he did it. So eerily uncanny were his predictions that rumors began to spread that he was using some sort of magic or witchcraft, to the point that he was often persecuted or avoided, and he began finding it necessary to explain that it wasn’t any sort of sorcery, but rather a science that had taken years of trial and error to hone. Although he was loathe to tell anyone exactly how he did it, Bottineau would eventually explain the basic concept and how he had developed it, saying:

It appeared to me that a vessel approaching land must produce a certain effect upon the atmosphere, and cause the approach to be discovered by a practised eye even before the vessel itself was visible. Each boat produces “emanations” in the ocean. These emanations affect the transparency of the atmosphere. Therefore, meteorical effects are produced on the horizon and they can be seen and read by all men who know how.

After making many observations, I thought I could discover a particular appearance before the vessel came in sight: sometimes I was right, but more frequently wrong; so that at the time I gave up all hope of success. In 1764, I was appointed to a situation in the Île de France: while there, having much leisure time, I again betook myself of my favorite observation. The clear sky and pure atmosphere, at certain periods of the day, were favorable to my studies, and as fewer vessels came to the island, I was less liable to error than was the case off the coast of France, where vessels are continually passing. I had not been six months upon the island when I became confident that my discovery was certain.

Bottineau’s legend would grow and his skill widely praised, until he was being claimed to even be able to discern how many men were on the decks of these ships or how many masts they had, all while they were hundreds of miles out. As word got out about his ability, Bottineau, who had become known as "The Wizard of Mauritius," started to draw the attention of senior naval officers and commanders, who realized the usefulness this skill could have at a time when their outpost on Mauritius was vulnerable to attack by the British at any time in the late 1780s. To this end, the French Imperial Court ordered a study be carried out on the engineer to test the validity of his claims, with every single one of his predictions being recorded and checked for accuracy over the course of 8 months. Apparently the results impressed the French greatly, with many senior officers singing his praises and signing affidavits confirming that this ability worked, and that only very rarely was Bottineau ever wrong. The governor of the island himself, Viscomte François de Souillac, would also fully vouch for Bottineau’s legitimacy, saying:

Since the war has broken out, his announcements have been very numerous, and sufficiently correct to create a sensation in the island. We have conversed with him upon the reality of his science; and to have dismissed him as a quack would have been an injustice. What we can certify is, that M. Bottineau was almost always right.

He sees in nature signs that indicate the presence of vessels, as we assert that fire exists in places where we see the smoke… this is the clearest explanation that he has afforded, in order to show that he did not make the discovery by knowledge of any art, or of any science, or by the application of any previous science. The signs, he says, indicate clearly enough the presence of vessels, but they only who can read the signs are able to judge of the distances, and this art, he asserts, is an extremely laborious study. 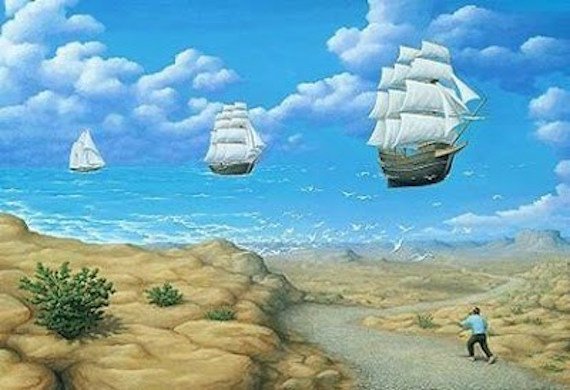 It is interesting to note how the skill of nauscopy was thoroughly played up by Bottineau as being an extremely difficult skill to develop, taking years of sincere effort to sharpen, and at times it almost feels as if he really wanted everyone to think that he was the only one actually capable of it. Throughout this all he remained extremely vague and opaque about how the process actually worked, but perhaps sensing that he could profit off of his skill he decided to strike while the navy was convinced of his validity. After making numerous correct predictions and offering invaluable intelligence to the French navy, Bottineau would make an offer to the French government to teach them how it was done in exchange for an exorbitant amount of money.

He traveled to France to try and work out a deal to this effect with the Ministry of Marine in 1784, but this did not pan out, and with the coming of the French Revolution Bottineau packed his bags and went back to Mauritius empty handed. There he would spend the remainder of his days continuing with his predictions and even allegedly teaching some lucky few how he did it, but it is largely thought that the secret to nauscopy died with him in 1802, as he never did release a full explanation of how it all worked. Nevertheless, there would be others over the years who also claimed to have discovered the secret, such as in 1811, when British Naval Officer James Prior noted in his journal of nauscopy and another who practiced it, writing:

Whether true or false, one of the persons thus gifted is said to have received a pension some years ago for his talent. This man communicated to government, that he had distinctly observed, from the island, the shipwreck of a vessel in one of the ports of Madagascar though laughed at, he persisted in his story, mentioned the day, the hour and the precise scene of her distress, all of which being duly registered, turned out afterwards to be correct; the distance is only about 400 miles.

There was also a Mr. Thomas Trood, who claimed to have developed the ability in 1866 while living in Samoa, but after this it seems the lost art of nauscopy just sort of melted away into the mists of time, leaving us to wonder how it was done or indeed if there was anything to it at all. There have been many theories about what it was all about, such as that Bottineau had actually discovered some new science of reading the atmosphere, or that he really was psychic or using some sort of magic. Of course there is also a lot of skepticism about this supposed ability as well, mostly due to the fact that most of the records and accounts of these amazing predictions and abilities were written by Bottineau himself, with others compiled by the French political theorist, physician, scientist, and French Revolution radical Jean Paul Marat, who was a big believer in Bottineau’s claims, making it all seem that it was perhaps exaggerated at best and made up in places at worst. Considering this, it is perhaps possible that Bottineau was basically just a con man who had found a way to trick people and convince the French Ministry of Marine of his incredible abilities. The affidavits confirming his abilities seem to be true, as are some eyewitness accounts, but they might have been exaggerated or taken out of context, it is hard to say because they are so old and the affidavits are only known from copies kept by Marat.

We are left with the question of whether Étienne Bottineau was ever truly able to do what he claimed without any special equipment and with only his eyes and the power of his own mind. Was he really gifted with this amazing ability and a genius, or was he just a clever con man and a crackpot? If this was true, then how did he do it? What was his secret? Considering that if it is true he very likely took the technique to his grave with him we will probably never know, and the art of nauscopy has faded away and become lost between the cracks of history.

The Latest Ghost Sighting In The Haunted Town Of Caernarfon