The Terrifying Mystery of the Dark Mirror

Throughout history mirrors have been featured heavily in myth and legend as having remarkable powers. It is something I have covered before, and it seems that no matter what culture you look at there are some traditions, legends, and spooky stories orbiting around mirrors. As a matter of fact, there are many cursed of haunted mirrors said to exist, but perhaps none really compare to one mirror in particular, painted black, which has gone on to terrify hundreds of onlookers and paranormal investigators.

One of the most terrifying tales of a supposed haunted mirror in modern times revolves around a type of mirror used for scrying, that is, using certain surfaces, usually reflective ones, in order to divine information from the spirit world. One form of scrying involves the use of what is called a “black mirror,” essentially a mirror which has had its surface coated with black paint to make it opaque or a solid dark. If one knows what they are doing, they can supposedly go into a trance and gaze into the black surface, where spirits will appear to them and even communicate with them, similarly to a Ouija board. It is considered by some to be a rather dangerous way to contact the spirit world, as the black mirror is said to act as sort of like a portal, and there is very little one can do to control what comes in or out of it. Those who have used black mirrors have told of having migraines or other health issues, seeing demons, having potent nightmares, and experiencing violent paranormal activity, and these objects are generally considered to be not for novices. 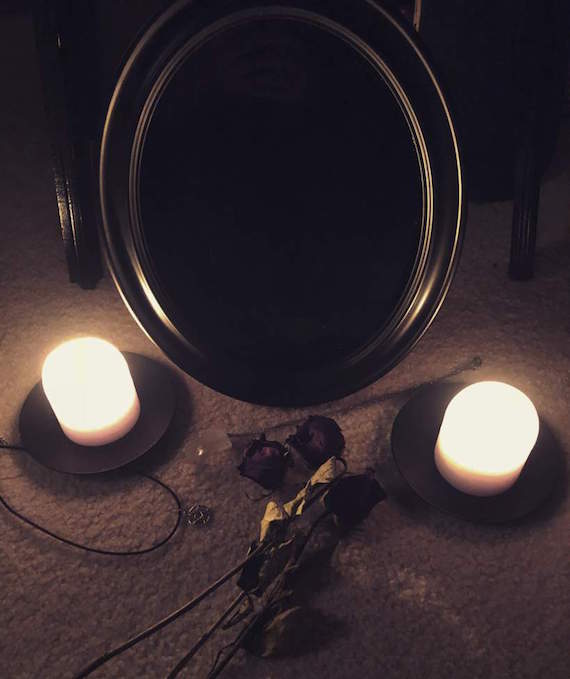 It is one of these ominous black mirrors that one day came into the possession of The Traveling Museum of the Paranormal and the Occult, and the story of how they acquired it is quite strange. According to Greg Newkirk, owner of the museum, they were approached one day by a woman he calls “Sarah,” whose mother had purchased the mirror at a scrying event at a convention for psychics. According to this woman, her mother had then become obsessed with using the mirror at all hours, constantly in a trance gazing within it, to the point where it became rather worrying. The woman asked to see the mirror, and found that her mother had covered it and locked it away in the closet, calling it “evil.” Not knowing what to do with it, Sarah contacted Newkirk and offered to donate it to the museum in order to get it off of her hands for good. Curious, the Newkirks put it in their collection, and considering it was surrounded by various other haunted or cursed objects they didn’t really think much of it. However, this particular object would prove to be far more than they had bargained for.

Things started to get weird when they put it on public display for the first time at a paranormal event, where a visitor came forward wanting to try it out. According to Newkirk, they typically allow museum guests to touch or try out various objects on display at their own risk, and so they let the woman come and take a look. She allegedly took one look into the mirror and then slammed it down with a terrified expression, claiming that she had seen her own decomposing corpse staring back at her and leaving in a distraught state before she could be questioned any further. This put off almost anyone else from trying it out, and the object started being called “The Dark Mirror” for the rest of the event and then on. Some were brave enough to try it and had similarly volatile experiences with it, telling of seeing all manner of horrific things within its frame, and so Newkirk decided it was best to stop allowing people to use it for the time being so that he could figure out what was going on. He himself refused to look into it, as he was starting to suspect that this object was potentially very powerful and dangerous, but he would claim that he had the distinct feeling that it was drawing him to it, telling Week in Weird:

The mirror wasn’t quite the same when we brought it home, or maybe I wasn’t. After we had unpacked our collection and returned the items to their usual places, I began to notice myself staring “off into space”, and when snapped back to awareness, realizing that I’d been staring at the covered mirror the whole time. I’d started to feel a strong urge to gaze into the black glass. Maybe I was just subconsciously weirded out by the disturbing reports of those who’d gazed, but I couldn’t shake the feeling that the mirror wanted me to use it. Whether it was own mind playing tricks on me or not, I resisted.

The Dark Mirror was soon after put back on display and people were once again allowed to gaze into its inscrutable surface, although they were warned against it, and more reports of strange experiences with it began to pour in. Some people saw nothing at all, others saw twisted shapes, black masses, or demonic figures, yet others saw themselves, but deformed, withered, distorted, or dead, and still others saw visions that were so horrifying that they incited panic attacks, the witnesses reeling away from the object as if it was filled with venomous spiders, including people that were at first highly skeptical. Some of these witnesses also described feeling a sort of electrical current flow through them as they held the mirror, headaches, dizziness, and in one case a woman who said that her mouth had filled with the taste of blood. Animals also reportedly would not go near it, with Newkirk’s own cats staying well away from it and often staring at it with a look of confusion, and it seems that every night the mirror would be covered, only to be found with the veil removed every morning. When Newkirk set up a camera to aim at the mirror at night, the memory card was mysteriously erased every time.

These incidents with the mirror continued, and seemed to get more intense as time went on. Paranormal investigators who came to look at it were made believers when they stared into it to see all manner of frightening things that incited everything from exclamatory profanity to visible terror, and it supposedly tends to freak out just about everyone who dares look into it. To make it all worse, Newkirk has claimed that the mere presence of the mirror seems to magnify the properties of the other haunted objects in their possession, and all of this was enough to make them decide to take the mirror odd of display and keep it tightly wrapped and locked away in a chest with a crucifix and rosary. What is going on with the Dark Mirror? Why does it have such intense activity around it? Greg Newkirk has given his own thoughts on the matter, saying:

After coming into possession of the Dark Mirror and watching hundreds of people have their own terrifying experiences while using it, it’s our belief that the piece isn’t exactly “haunted” per se, but an object that seems to feed on human interaction, even fear. In the beginning, The Dark Mirror was just another object with an intriguing story behind it, but as we began to feed it a steady stream of freaked out experiencers in haunted locations across the country, it became pretty easy to see that the mirror was affected by all the attention. It took Sarah’s mother several weeks of regular, individual scrying sessions for her interactions with the mirror to come to a head, but for three months we’ve been feeding it a veritable all-you-can-eat buffet.

It’s as if the Dark Mirror is acting as a kind of battery. After each event, the phenomena that the mirror exhibits gets a little harder to ignore, leading me to believe that by allowing the brave and the curious gaze into the mirror, not to mention doing so in some of the world’s most haunted places, we’re “charging it”. In turn, it seems like the “juice” gets used not just by the Dark Mirror, but by other objects as well. 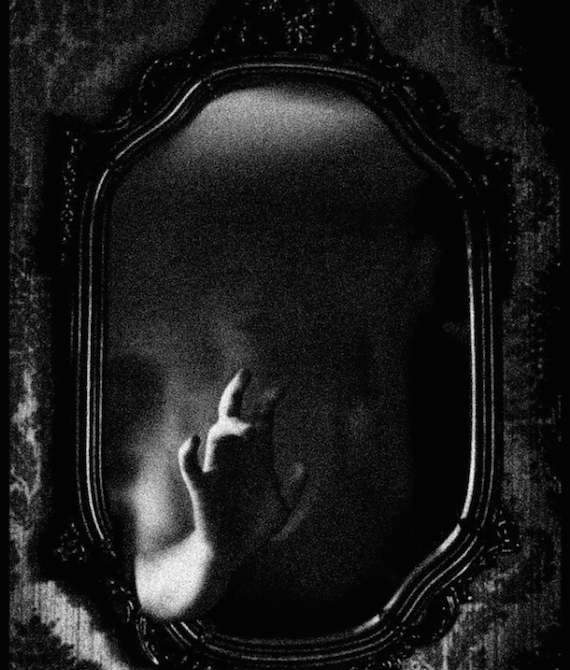 Through this all, Newkirk has refused to look into the mirror himself, and after keeping it locked away for some time it has gone on the road once again for display, kept locked in its chest when not in use. Whether showing it again is a wise move or not remains to be seen, but there seems to be more than enough people willing to risk trying it out. What is going on with the Dark Mirror? How is it able to have so much power? Is it, as Newkirk believes, a sort of “battery” that feeds off of those who use it? Is it haunted or cursed? Or is it, like the stories of other black mirrors go, some sort of portal to another spiritual realm, a gateway for forces beyond our understanding? Or is it all just the mind playing tricks, cued up for strangeness from all of the spooky stories orbiting it? There is only one way to find out, and that is to take a look into it yourself.