The Wait Is Finally Over: Scientists Reveal Their Findings On The Loch Ness Monster

We’ve all been waiting for the big announcement on the findings regarding the DNA of the Loch Ness monster and we finally have an answer. Researchers from New Zealand conducted the most extensive search yet of the famous Loch Ness Lake in the Scottish Highlands by taking more than 50 samples of water. Their conclusion is that the mythical Loch Ness Monster is more than likely a gigantic Eel. Yes, you read that correctly, an EEL.

Researchers took the DNA from each sample and compared it to the global DNA databases where they studied everything from the bacteria, the fish, and more. According to geneticist professor Neil Gemmell from the University of Otago in New Zealand, there was a significant amount of eel DNA that was found in the lake. “Eels are very plentiful in Loch Ness, with eel DNA found at pretty much every location sampled – there are a lot of them,” he explained.

So what makes them think that hundreds of years of sightings of a huge sea monster were in fact just a gigantic eel? “Well, our data doesn’t reveal their size, but the sheer quantity of the material says that we can’t discount the possibility that there may be giant eels in Loch Ness,” Gemmell said, adding, “Therefore we can’t discount the possibility that what people see and believe is the Loch Ness Monster might be a giant eel.”

Over the years, divers have reported seeing eels that were as thick as their legs in the river. However, an eel being around 4 meters in size (many sightings suggest that the creature is around that size) is a bit hard to believe, although Gemmell says that it’s “not impossible that something could grow to such unusual size.” He continued on by stating that while more studies and research needs to be conducted, their theory that the Loch Ness Monster is nothing more than a huge eel remains a “plausible idea”. 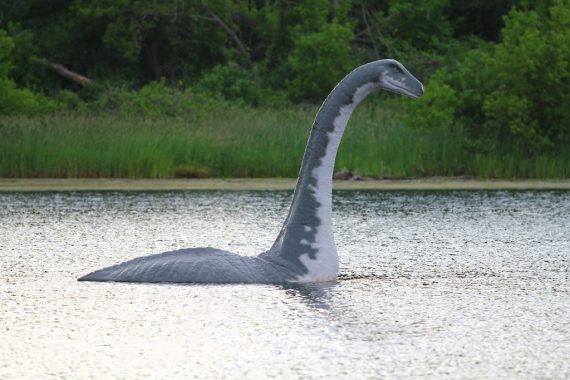 Stories of the Loch Ness Monster have been around for centuries, with some people even speculating that the creature could be the long extinct plesiosaur. However, Gemmell dismissed that idea by stating, “We can’t find any evidence of a creature that’s remotely related to that in our environmental-DNA sequence data,” adding, “So, sorry, I don’t think the plesiosaur idea holds up based on the data that we have obtained.”

Gemmell finished off by saying, “What I’m most satisfied with is that we came here to study environmental DNA, and our analysis has captured everything we thought is in the loch.” Perhaps he’s satisfied with the giant eel theory, but that gives very little comfort to those over the years who swear they have witnessed the actual Loch Ness Monster with its long neck appearing quickly in the lake.