A Mysterious Lake Monster in the Wilds of Siberia

Lying out in the remote, snow swept wilderness of Oymyakonsky Ulus, Sakha Republic, Russia, in Siberia’s Yakutia region, surrounded by a wild realm of untouched frozen forests prowled by wolves and brown bears and far from civilization is the lonely Lake Labynkyr. Measuring roughly 17 square miles (45 square kilometers) in area, with an average depth of 171 feet (52 meters), and possessing a large underwater trench which runs as deep as 263 feet (80 m), Lake Labynkyr is one of Russia’s most remote and little explored lakes. Notable for its mysterious ability to maintain a constant surface temperature of precisely 36 degrees Fahrenheit (2 degrees Celsius) regardless of the season and even through winters that drop to -50C through reasons that are poorly understood, this untamed Siberian lake is also known for a very strange and savage alleged denizen of its cold depths, which roams these frigid waters and has lodged itself into myth, legend, and mystery.

Although located in one of the most forbidding places on earth and surrounded by perilous, hostile terrain, mountains, and thick forests, largely a stranger to the eyes of humankind, there have for centuries been reports trickling in from explorers in the region of something very bizarre and very large in Lake Labynkyr. Called the “Labynkyrsky Chert” or the “Labynkyr Devil,” it is typically described as being around 30 feet in length, 4 feet wide, and covered with dark gray skin reminiscent of that of a whale or elephant. The beast is especially known for its gaping maw that takes up a third of its body length, filled with razor-sharp teeth and set within a head topped off by some sort of horn or bony protrusion. It has long been said by locals to be incredibly aggressive, unafraid of attacking boats or snatching animals from the shore, including even large, fierce animals like bears, and there are numerous reports of the menacing creature snatching seabirds or ducks from the surface. Fishermen were long said to be afraid to go out on the water here, as the monster was said to be fiercely territorial, and they usually went out well armed.

While such tales originally started out as spooky stories told by the locals and brought back by explorers traversing this inhospitable realm in the 17th and 18th centuries, the Labynkyr Devil would go on to be sighted and encountered far into modern times, and a few of these sightings have even been made by researchers and scientists. One report was made in 1953, when Viktor Tverdokhlebov, of the Soviet Academy of Sciences, saw what he described as a large dark creature “with a large mouth and wide-set eyes,” that looked somewhat similar in form to a killer whale swimming under the surface. In more recent report a group of geologists in the region allegedly saw the creature surface out on the lake. Some locals also apparently saw the same thing and allegedly fired guns at it to scare it away, warning that the creature was very dangerous. A very prominent account came in 2012, when associate professor of biogeography at Moscow State University, Ludmila Emeliyanova, claimed to have spotted the elusive beast on sonar. She would tell the Siberian Times:

The object was very dense, of homogenous structure, surely not a fish, nor a shoal of fish, and it was above the bottom. I was very surprised, but not scared and not shocked, after all we did not see this animal, we only registered a strange object in the water. But I can clearly say - at the moment, as a scientist, I cannot offer you any explanation of what this object might be. I can't say we literally found and touched something unusual there, but we did register with our echo-sounding device several seriously big, underwater objects, bigger than a fish, bigger than even a group of fish.

This wouldn’t be the first time the creature had been picked up on sonar, as in 2006 a scientific expedition on the lake apparently also picked up something very odd. They claimed that they had picked up several objects that seemed to be on the move, measuring around 20 feet in length each. One of the crew would say of the odd phenomenon:

Often the device showed the long chain of big fish some 4 metres above the bottom of the lake, when the depth was about 30-45 meters. Some 'object' was detected at a depth of 30 metres, appearing to be seven metres wide. I switched off the 'Fish ID' and we watched just pure scanning. Soon we registered a 'shadow' some 15-17 metres under our boat, it was about 6.5 metres long. It was pretty clear, it was not a fish and not a tree. There cannot be fish that big, and a log would have been registered in a different way. How can it swim under the water? The most active 'shadows' or 'bodies' were registered in certain parts of the lake when the depth was 42 to 60 metres. 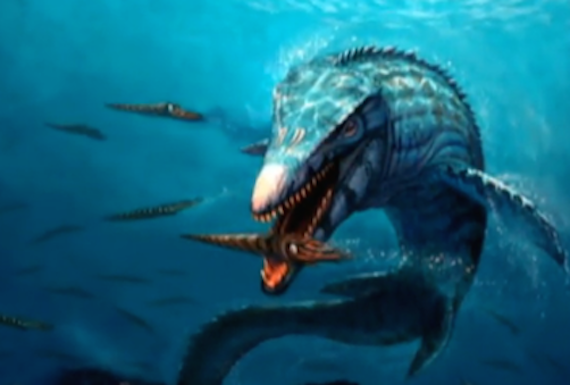 There have on occasion even been claimed remains of the creatures found. Locals will sometimes say that they have found the huge jawbones or bones of the creatures washed up on shore, and in 2013 there was a spectacular report in the Voice of Russia of a team of scientists from the Russian Geographical Society, who claimed to have seen something odd on the bottom as they were gathering samples of water, plants and animals. On one of their underwater scanners they claimed to have spotted an object deep down on the gloomy bottom that appeared to be a jawbone and skeleton of some large animal. One of the expeditions members would say of the amazing discovery in the Siberian Times:

There have been all sorts of hypotheses about what kind of creature it could be: a giant pike, a reptile or an amphibian. We didn't manage to prove or to disprove these versions … [but] we managed to find remains of jaws and skeleton of some animal.

Unfortunately, it is unknown what happened to these mysterious remains, and no proof of the finding has been forthcoming. Despite the frigid, harsh conditions there are some intrepid monster hunters that have been drawn here in the hopes of finding out more. Perhaps the most determined of these is a man named Andrey Solovyev, who has garnered a reputation as a sort of full-time Labynkyr Devil hunter. Solovyev has spent years scouting out the remote lake for signs of the beast, often camping out here to live off the land in freezing temperatures and enduring hellish conditions in solitude for long stretches to do so. He has said of some of his experiences on the lake:

Two weeks ago when the ice was still not completely frozen some dark creature swam out of the lake - but I couldn't identify it. Some strange things were happening here, like in September when I set very robust nets and they were torn to shreds, like I could never imagine. I saw huge - meters in diameter - holes on these nets. It definitely wasn't done by a fish, even a pike couldn't bite through this net. I am not claiming anything, but I think that perhaps it does live here.

Of course there have been many theories as to what the Labynkyr Devil might be. It has been speculated that it might be some outsized fish, but although salmon, pike and dogfish are known to live here, none of these species even approaches the sizes reported. There are also the ideas that it is some sort of whale species that has somehow become landlocked in the lake in ancient times, perhaps even a type long thought to be extinct, or even some other prehistoric beast like a dinosaur. One interesting theory is that there is a network of subterranean tunnels that connects Lake Labynker to the nearby Lake Vorota, which also incidentally has reports of its own monster, as well as possibly other lakes or even to the ocean. Of course there is also the idea that nothing is there at all and that this is all just spooky tales, but Dr Emeliyanova disagrees, citing the persistent sightings by locals, saying:

Personally, I do believe that when the information about something strange circulates among local people for so many years, it just can't be groundless, it means something is there. I know the local people very well - they are ingenuous but they do not lie. I have been on a dozen expeditions to this region and I can say I know the character of locals well. They are emotional - but are not intended to show their emotions, and they are very true and honest by nature, often more honest than is necessary. This is why I am not ready to reject all these stories.

What could be behind this phenomenon? Is there anything to this all? Is this a giant fish, prehistoric monsters that should have gone extinct long ago, or something else all together? Whatever the monster of Lake Labynkyr is, it is an intriguing case of a cryptid lying out in one of the coldest, most remote places in the world, and it certainly serves to fire up wonder and the imagination.

Mysterious “Blob” Has Nearly 720 Sexes And No Brain