Scientists have finally rediscovered the “lost city of Cambodia”. Officially called Mahendraparvata, it was an early Angkorian capital city and one of the first capitals of the Khmer Empire – a Hindu-Buddhist regime that was around from the 9th to the 15th centuries and was located in Southeast Asia.

While archaeologists and historians have known about the ancient city of Mahendraparvata for several decades, they didn’t know exactly where it was located until now. Thanks to airborne laser scanning (or Lidar) as well as ground surveys, an international team of researchers were able to locate the ancient lost city hidden beneath the Cambodian jungle. More precisely, the city was found in the Phnom Kulen plateau which is located to the north-east of Angkor.

According to their paper, “The mountainous region of Phnom Kulen has, to date, received strikingly little attention.” It went on to read, “It is almost entirely missing from archaeological maps, except as a scatter of points denoting the remains of some brick temples.” The researchers went into further details on their findings in their paper which can be read in full here.

Between 2012 and 2017, the team conducted several Lidar survey flights over that area and were able to find numerous archaeological features that hadn’t been noticed during the ground surveys. They noticed several features from the lost city that was around 50 square kilometers and were laid out in a grid-like pattern of linear axes. The researchers explained it further by stating, “Dams, reservoir walls and the enclosure walls of temples, neighborhoods and even the royal palace abut or coincide with the embanked linear features.” 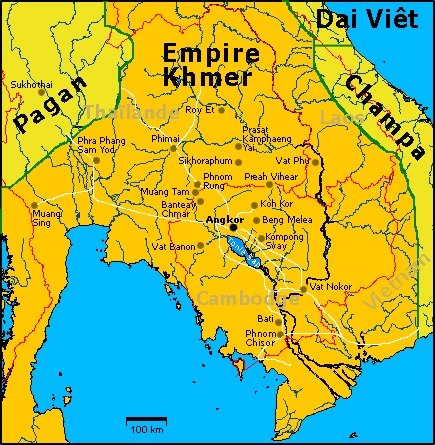 Jean-Baptiste Chevance, who is from the Archaeology and Development Foundation in the UK as well as the first author of paper, told Newsweek, “The Ancient Khmer modified the landscape, shaping features on a very large scale – ponds, reservoirs, canals, roads, temples, rice fields, et cetera.” He went on to say, “However, the dense forest often covering the areas of interest is a main constraint to investigating them.”

While the city was designed in an elaborate and sophisticated way, it did not last long as the Khmer Empire moved its important operations to Angkor which was their new capital city. Team member Damian Evans, who is from the French School of the Far East, told New Scientist, “The city may not have lasted for centuries, or perhaps even decades,” adding, “But the cultural and religious significance of the place has lasted right up until the present day.” An aerial view of Mahendraparvata as well as a photo of a temple site can be seen here.

In a Rare Case of the Lazarus Syndrome, a Woman is Declared Dead Twice