Bigfoot May Be the Biblical Cain According to Mormon Writings

Is Bigfoot Cain, the firstborn son of Adam and Eve in the biblical story? If the person you're asking is a Mormon, the answer might be “Yes!” A recent article brought up that little-known (at least outside of Mormon circles) link between the mythical hairy cryptid and the first murderer in the Bible, an act which led to Cain being linked to evil and blamed for all sorts of problems throughout history. But … Bigfoot?

“As I was riding along the road on my mule I suddenly noticed a very strange personage walking beside me. ... His head was about even with my shoulders as I sat in my saddle. He wore no clothing, but was covered with hair. His skin was very dark. I asked him where he dwelt and he replied that he had no home, that he was a wanderer in the earth and traveled to and fro. He said he was a very miserable creature, that he had earnestly sought death during his sojourn upon the earth, but that he could not die, and his mission was to destroy the souls of men.”

That quote comes from “Life of David W. Patten: First Apostolic Martyr” by Lycurgus A. Wilson and Gerald S. Edwards. David Wyman Patten (November 14, 1799 – October 25, 1838) was an original member of the Quorum of the Twelve Apostles and is considered to be a martyr by members of The Church of Jesus Christ of Latter-day Saints (LDS Church) – important enough that he’s mentioned twice in the LDS Church's Doctrine and Covenants. His alleged creature encounter occurred in Paris, Tennessee. 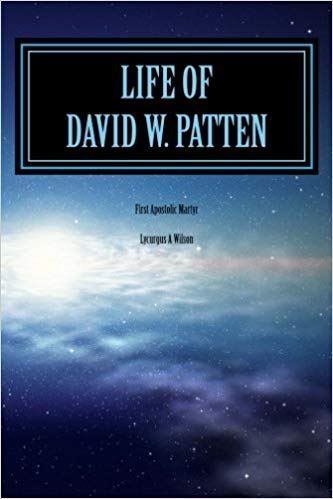 Does that make him a reliable witness of Cain/Bigfoot? Lycurgus Wilson got the account from a letter written by Abraham Smoot, another Mormon pioneer who was mayor of both Salt Lake City and Provo, Utah, and had a personal contact with Patten. Of course, he was also an early leader of the LDS Church, so he undoubtedly believed Patten. However, Patten doesn’t identify the being to Smoot as the biblical Cain. That connection comes from "The Miracle of Forgiveness" by Spencer Kimball, another early elder, who calls the account “an interesting story” about Cain.

Matthew Bowman, author of "The Mormon People: The Making of an American Faith," writes that Wesley Smith, the brother of recent President Joseph Fielding Smith, claimed to have been attacked in Utah by a similar beast in a similar manner and similarly chased it away with a religious invocation. This seems to have occurred at about the same time (early 1980s) as a number of Bigfoot sightings in South Weber, Utah. With Bowman planting the first one, locals connected the remaining dots and linked their Utah Bigfoot to Smith’s and Patten’s creatures to Kimball’s Cain. For those unable to make the connections from that, Shane Lester wrote “Clan of Cain: The Genesis of Bigfoot", which is a novel based on a “true” story.

“I uncovered an obscure historical document that sheds new light on the Bigfoot mystery. I used this encounter as the basis for a fictional story that links the mystical, legend of Bigfoot to the origins of Mormonism."

What obscure document did Lester discover? David Patten’s story of “a very miserable creature” that could not die so it was on a mission to “destroy the souls of men.” As we've just seen, that’s not exactly new, but then again, Lester’s book is a novel, as is his “The Conversion Conspiracy,” which links obscure Mormon folklore with the first extraterrestrials to visit Earth.

“Never before has a book on the subject of Bigfoot linked the mystical, paranormal Sasquatch to the origins of Christianity. A man, a myth and the obsession to know the truth will reveal a story that will forever change the way you think about Bigfoot.”

Does David Patten’s story convince you that there’s a link between Bigfoot and Cain as it has convinced Spencer Kimball, Joseph Fielding Smith, Shane Lester and many Mormons? While Utah has many Bigfoot sightings, none of the creatures seem to have caused any harm to the witnesses, much less destroyed their souls. Poor Cain gets blamed for an awful lot of bad things and the Old Testament mentions his death, which kind of kills the idea of him being immortal. Still, as Spencer Kimball said, it’s “an interesting story.”

To paraphrase a popular bumper sticker:

What would Bigfoot think?

The Mysteries of the Legendary Well of Souls