Indonesia is a land of deep myths and legends, with a focus on many pieces of lore involving spirits becoming attached to inanimate objects and a menagerie of all manner of strange entities. One of the oddest supposed supernatural creatures from Indonesia, and in particular the island of Java, is a miniature, doll-like entity commonly referred to as the Jenglot. The typical description of these creatures is that they resemble a smallish living doll, standing only a few inches high, with shriveled dark skin and distorted, deformed human-like features, fangs, long hair, and wicked looking claws. In a sense, they resemble living mummies, and their origins are rather murky.

The lore on these creatures is rather recent, originating in either the 1970s or 1990s, depending on who you ask, and they are supposedly conjured up through arcane rituals carried out by local shamans. In some traditions these creepy doll entities are said to have been once human, being those who sought eternal life through meditation and the sturdy of Ilmu Bethara Karang, a mythical path to living forever. Unfortunately, living forever in this case meant that they did so as a fanged, horrifying doll-like ghoul, as they first died and then were shrunk down and regurgitated from the grave, essentially rejected by the earth. As soon as they are invoked they are apparently not mobile on their own, but rather animated by dark magic, and they are capable of inferring powers onto their new master. One Islamic medical practitioner named Muhammad Syakir Muhammad Azmi has said of the Jenglot:

On its own, jenglot has no power and is nothing more than a typical toy which cannot move on its own. It is only when black magic is used, by performing a certain ritual on the jenglot, the myth has it, a jenglot can serve its master either for many purposes, including for protection, to make one look beautiful or dashing, as a good luck charm as well as taking revenge on an enemy. 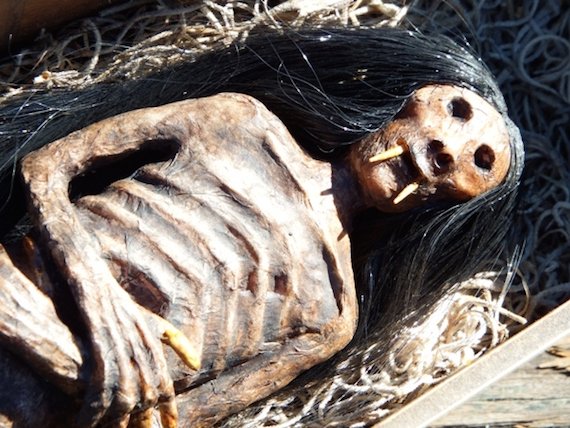 Once conjured up, the Jenglot are then purportedly either kept by the shaman as a servant, or let loose into the wilds, where they will live under ground of in the trunks of trees. If one is to keep the creature, it is said that they must be fed blood, a few drops a day, and it is kept in a special black box, inanimate unless called upon by their master, with blood being the key to kicking them to life. The feeding of blood is said to be very important for one who would jeep a Jenglot, as if they do not get a daily feeding they will supposedly lash out at their owners and those around them. Lack of feeding makes them mad, and by all accounts you wouldn’t like them when they are mad. The Jenglot are typically thought of as abominations, repulsive to the earth and life, shunned by the Muslim religion, and it is believed that only the most powerful shamans can control them.

This may all sound like pure superstition and folklore, but there have been many supposed Jenglot corpses sold out on the market and making the rounds. These are typically very freakish looking little dolls fashioned from hair, skin, and who knows what else. Just like the legend says they are usually ensconced within black gift boxes, and although they seem to be mostly marketed as an almost joke item there have been plenty of people who have claimed tha they are more than that. Tales of the Jenglot leaving their boxes to be found lying all over the house are common, as are cases of the boxes themselves moving about on their own. 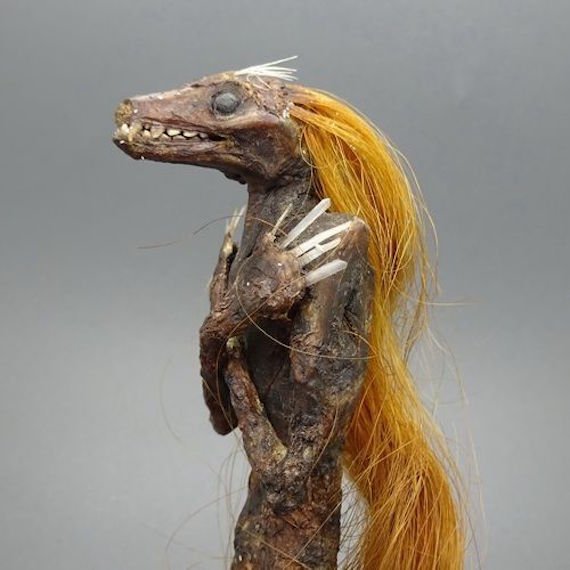 These supposed dead Jenglot have been a feature of many exhibitions as well, which seek to present them as objects of true mystery, usually specimens said to have been finally killed through the deprivation of blood, although they very often seem to have life left in them still. Sometimes these corpses can fetch a good price, such as is the case with one that went on the market in 2019, which commanded a price of RM20,000. There has been some scientific study done on some of these remains, and it always turns out that the hair is of human origin, leading to the idea that these are all just a clever gaffe. A gaffe is essentially a fake specimen fashioned form a hodgepodge of parts, such as the famous “Fiji Mermaids” made from a monkey upper body sewn to a fish tail, often with such ingenuity and craftsmanship that they are indistinguishable as being fake.

Whether they are real or not, Jenglot specimens have become quite popular among paranormal collectors, and many locals still believe them to be very real indeed. The true believers, and those that have seen these things in action say that even if they have been shown to be manmade toys they still hold within them roiling supernatural powers. Considering that there are plenty of haunted dolls in this world, it is not hard to see that even an object seen as being made of various parts and human hair could still be considered to be possessed by evil spirits and dark magic. Is that what is happening with these disturbing Jenglot? Or it this just a relatively recent urban lagend stoked by Internet stories? It is hard to say, but it is nevertheless an interesting look at the spooky folklore and strange traditions of a faraway land.