In these times when the word “doomsday” seems to be used more often by the mainstream media than in dystopian novels, it’s good to know that the US military has doomsday equipment designed to survive a major holocaust and bring aid to the few desperate humans who survive said holocaust as well. This is true … unless the holocaust is caused by a bird. Wait … what?

“However, the E-6’s sinister purpose is to maintain the communication link between the national command authority (starting with the president and secretary of defense) and U.S. nuclear forces, even if ground-based command centers are destroyed by an enemy first strike. In other words, you can chop off the head of the U.S. nuclear forces, but the body will keep on coming at you, thanks to these doomsday planes.”

The National Interest puts the U.S. Navy’s E-6 Mercury is based on Boeing's 707-320 airliner but looks nothing like a conventional plane on the inside because its mission is not to transport passengers but to maintain TACAMO (TAke Charge And Move Out) – a secure link between the national command authority and whatever nuclear weapons personnel are left after the initial holocaust. Based at Tinker Air Force Base, Oklahoma, and operated by Fleet Air Reconnaissance Squadron 3, the 16 planes in the fleet use Very Low Frequency radios while flying at a continuous high altitude and trailing a five-mile-long wire antenna to communicate with nuclear weapons stations worldwide – even nuclear ballistic-missile submarines hiding deep underwater, thousands of miles away. Designed to survive, they can even withstand the electromagnetic pulse from nuclear weapons detonating below.

“A wayward bird struck one of the plane’s four engines when it was landing on Oct. 2, temporarily grounding it and causing at least $2 million in damage, Tim Boulay, communications director for the Naval Air Warfare Center Aircraft Division, told The Washington Post in an email Thursday.”

Oops. The Washington Post reports that an E-6B Mercury was performing a relatively standard “touch-and-go” maneuver (a brief touch down and take off without stopping) at the Patuxent River Naval Air Station in St. Mary's County, Maryland, when it took a bird in an engine (paging Captain Sully!) and had to make an emergency landing where ground crews determined the plane couldn’t fly again without $2 million in repairs. If this were an actual nuclear holocaust, where would the “national command authority” get $2 million?

“The incident was classified by the Naval Safety Center as a “class A” mishap, which also applies to cases that result in aircraft destruction, death or permanent disability.”

Fortunately, there were no deaths or permanent disabilities caused by the doomsday bird and the E-6 was eventually repaired. It’s a good thing these kinds of incidents involving our last hope for surviving a nuclear holocaust don’t happen too often, tight? RIGHT?

“A Navy aircraft designed to keep U.S. leaders connected during a nuclear war was damaged while being towed out of a hangar at Tinker Air Force Base in Oklahoma earlier this month, officials confirmed Wednesday. The E-6B Mercury’s vertical stabilizer struck the hangar during the routine movement on Feb. 7, according to the Naval Safety Center. The safety center charted the accident as a “Class A” mishap, which involves damage of $2 million or more.”

That’s just eight months ago when the Navy Times reported that another E-6 suffered a Class A mishap due to a towing accident in a hangar! Wow. Well, at least the one this month was caused by a bid. Those don’t happen too often, right? RIGHT?

“Because pilots and crews use the same low altitude airspace as large concentrations of birds, the prevention of bird strikes is of serious concern to the military.” 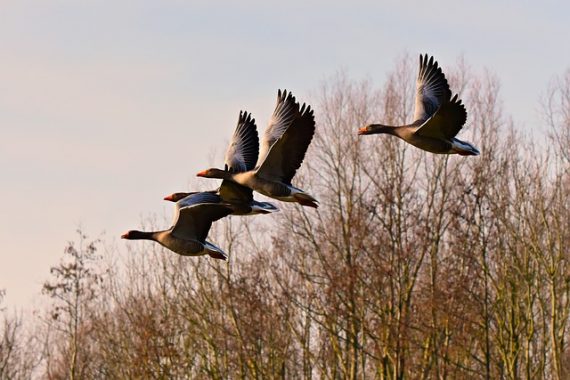 A Defense Department statement in the Washington Post described how the military tries to prevent doomsday bird strikes -- by modifying habitats and scaring birds away from runways and by studying bird movements near training routes. As a result, the Navy says there have only been five Class A bird strikes in the last decade and only two involving an E-6B Mercury plane. That sounds comforting … unless you consider the fact that after a nuclear holocaust, there will be no one left to shoo birds away from the runway or study their habitats. The best we can hope for is that the nuclear holocaust kills the birds too.

A Look at the “Most Haunted” House in England