While the Navy 'Tic Tac' UFOs and the Storm Area 51 fiasco get all of the mainstream media attention, what has been memorialized by government officials as the “only historically documented UFO sighting in the United States” continues to be the Rodney Dangerfield of UFO sightings, getting no respect from the media nor local community government officials and business leaders who want the monument dedicated to the 1969 event moved out of sight and the park established around it repurposed to something less … popular with everybody but them? 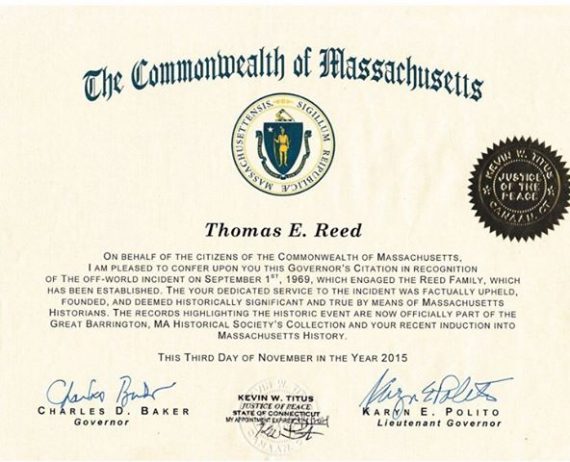 That explains why Thom Reed, who as a 9-year-old was “taken aboard a tarnished circular looking vessel where an image of a willow tree was displayed” and returned hours later with his family. Reed fought to have the event memorialized, fought again when local officials claimed it was on public property and is now fighting again – this time in court. Before you ask, he has the support documents, the letter from the governor and the polygraph test (verified by the police) to prove it. Why did the aliens accept Thom Reed but not his own people? 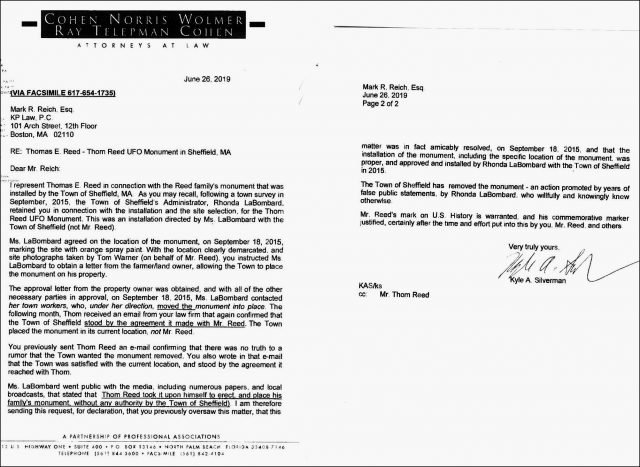 Thom Reed has retained a prominent law firm and has begun the process of suing the town of Sheffield, Massachusetts, and others for blatant malice and slander regarding their involvement in the selection of the site for the monument, which they later said was on public property and that it was all Thom Reed’s doing. He’s also filing a class action lawsuit with the many local television personalities and businesses who sponsor the UFO Monument Park and has other suits and complaints under consideration. Needless to say, Thom Reed is upset – not just about the monument and the park but about his good name as well. 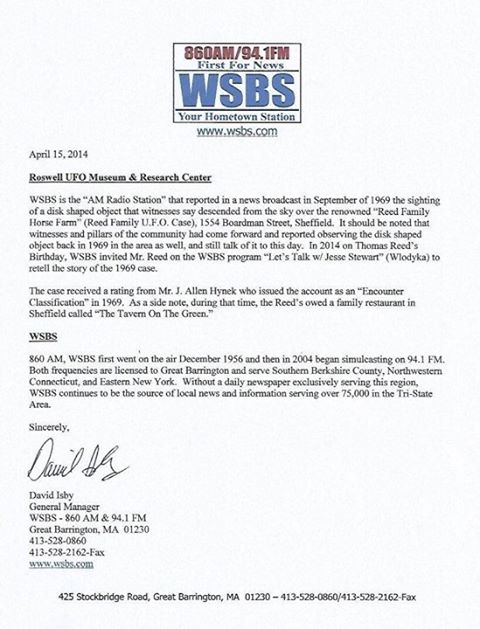 Local radio station WSBS verified that it broadcast news of a UFO sighting on September 1, 1969, which was witnessed by many people besides Thom Reed who called in to report it. It was the subject of numerous documentaries (the History Channel filmed an episode of "Ancient Aliens" at the park) and the dedication of the monument in 2015 received coverage outside of the local news. Thom Reed is now working on his own documentary and book that will no doubt include more details of his fight for the monument and park memorializing his abduction and experiences because it’s still the “only historically documented UFO sighting in the United States.”

“The incident was factually upheld, founded, and deemed historically significant and true by means of Massachusetts historians. The records highlighting the historic event are now officially part of the Great Barrington, Ma. Historical Society’s Collection and your recent induction into Massachusetts history."

Thom Reed has stated that he saw UFOs twice on his family’s property prior to 1969. Has he somehow been selected to fight for the rights of UFO witnesses and contactees to have their stories told accurately? Do UFO accounts have to be military-related or potential moneymakers before they’re accepted? As this quote from the Berkshire Eagle implies, there’s plenty of people who believe in lake monsters and how many of them have letters from the governor? 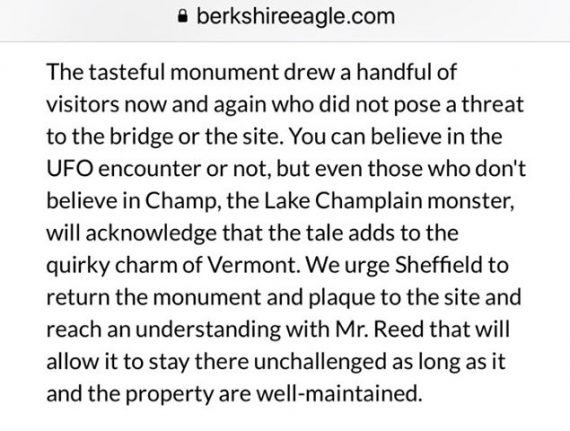 You can believe in Thom Reed’s UFO encounter or not, but even those who don’t should believe in his right to protect his name and reputation. This is still America.

Even the aliens would support that.