How a Set of Odd, Humanlike Fossil Footprints Caused a 19th Century Controversy

Paleoichnology involves the study of trace fossils that are preserved in ancient rocks. One of the key areas this discipline focuses on is the presence of fossil footprints, whether those left by ancient animals or early humans... although at times, it has proven difficult to distinguish between the two.

One of the most curious instances where seemingly anomalous fossil footprints were discovered in North America occurred in 1882. The discovery, made in the Nevada State Prison Quarry near Carson City, Nevada, appeared to represent a set of bipedal footprints, which naturally led some to believe they were made by some large variety of early human.

Large might be an understatement in this case, since the footprints measured roughly 18 to 20 inches in length, with a stride of close to a meter between each footfall. If this had been any kind of early human, it would have to have been a very large one.

The discovery that the tracks of several species of Pliocene Mammalia in the argillaceous sandstones of the quarry of the Nevada State Prison at Carson, are accompanied by those of a biped resembling man, is a further confirmation of these views. The tracks are clearly those of a biped, and are not those of a member of the Simiidae, but must be referred to the Hominidae. Whether they belong to a species of the genus Homo or not, cannot be ascertained from the tracks alone, but can be determined on the discovery of the bones and teeth.

“In any case,” Cope concluded, “the animal was probably the ancestor of existing man, and was a contemporary of the Elephas primigenius and a species of Equs.” 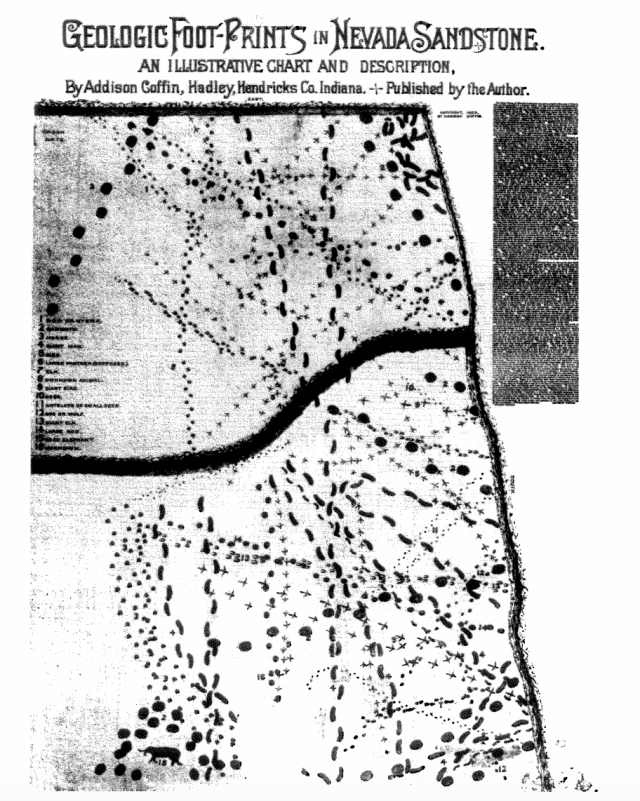 Not all of Cope’s colleagues were as convinced as he had been that this monstrous biped had been some kind of very large archaic human. Othneil C. Marsh (who later would become a proponent of the ape-like appearance of sculptures found along the John Day River, one of which he recovered himself), was skeptical of the idea that the Carson footprints belonged to any human, let alone one so very large. Marsh proposed the idea that the prints had been made by another animal, the giant ground sloth or Mylodon.

While Marsh had been the first to propose this creature as a solution to the mystery, he had not been the last. The idea was supported by Joseph Le Conte who, writing in nature, nonetheless stated that “many who have seen the tracks and think them human” had a right to their own theories and ideas, leaving the subject somewhat open to debate.

The matter did finally end up being settled, however, once paleontologist Chester Stock became involved. Stock, who went on to join Caltech in 1926 as Professor of Paleontology and remaining there until 1950, was also Chairman of the Division of Geological Science and had conducted extensive studies of mammals represented in the fossil record of North America. In his early fieldwork, Stock had studied various ice age mammals at the famous La Brea Tar Pits. If anyone would be able to identify the odd prints at Carson, it would be Stock.

Supporting Marsh’s earlier contention that the prints had been made by a variety of giant ground sloth, Stock made a watertight case that the fossil prints at the Nevada quarry site most closely resembled the hindfoot of the Paramylodon harleni, or Harlan’s Ground Sloth, which existed in America between 4.9 million years ago and as recently as 11,000 years ago. 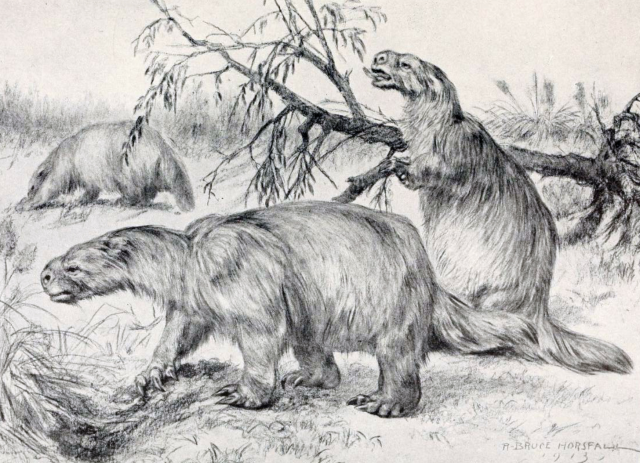 While Stock had already made a solid case that the fossil footprints belonged to this species, any further doubt was removed shortly thereafter when the remains of one of these creatures was found at nearby Carson City.

For those who had hoped that the footprints had been left by some “pre-Adamite Man” (or perhaps even a Pleistocene-era Sasquatch), it seemed that the culprit had instead been one of the far more animalistic lumbering giants of the ice age, which recent studies have shown were hunted by early North Americans.

Hence, the mysterious “giant human” footprints of Nevada had been made by no human at all, although they most certainly had belonged to one of the many giant creatures of ice age North America.