There's a lot of things that supposedly "separate man from the animals," but how true is that? One of the things we've arrogantly liked to claim for ourselves and ourselves alone is the "theory of mind," the ability to understand that other people have minds, thoughts, and opinions of their own, and the ability to use that knowledge in our planning and decision making. It's a pretty "human" ability, or so we thought. A groundbreaking new study from Japan has proved that the other members of the great ape family—chimpanzees, orangutans, and bonobos, our closest relatives—all share that same cognitive ability. How did they achieve this groundbreaking discovery? The only way you can prove something so monumental: with a man in a monkey suit.

The study was led by Fumihiro Kano of Japan’s Kyoto University and the findings were published in Proceedings of the National Academy of Sciences. Researchers had 47 different subjects of the various species of the great ape family watch a video of another great ape—a human—in a monkey suit hide an object from an unsuited human actor. Using eye tracking technology, researchers watched as the studied apes changed where they were looking based on the information they believed the human actor possessed. If you want to just get to the video of a dude jumping around like a chimp while other chimps watch, you can see it here. Yes, it's as weird as you hope it is.

But just because it's a video from Japan of a man in a chimp suit wilding out while a pensive orangutan silently watches and judges doesn't mean the experiment isn't really cool. Science is often ridiculous.

The experiment, in detail, worked like this. The apes were given a juice straw so that their eyes were fixed forward and their eyes could be tracked (also so they could enjoy refreshments during the film). The apes were then shown a video of the chimp-man hopping around a cage with an object that looks like a cinder block. The human actor pretends that he wants the object. The chimp-man puts the object under one of two boxes in the cage. Frustrated, the human actor leaves the room. After the human leaves the room, the chimp actor removes the object from the box and places it off screen. When the human actor returns to the room, he places his hand into the cage, about to reach for the boxes. Eye tracking technology on the studied apes showed that they looked towards the box that the human actor saw the chimp actor place the object under, indicating that they understood what the human would know if this were a real situation. 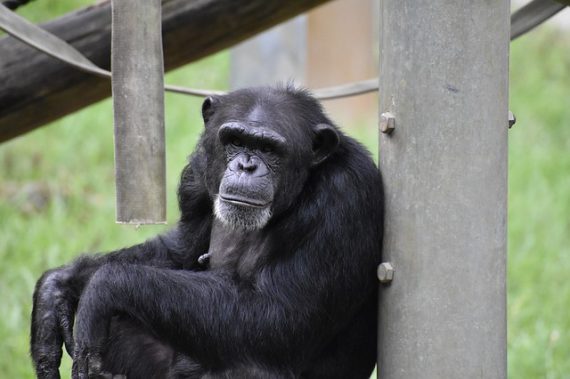 The next part of the study had the 47 apes become acquainted with two different screens. One screen was translucent (vaguely see-through) and the other was solid. After the apes understood the difference between these two screens they repeated the video experiment. This time, however, the human actor did not leave the room, but instead went behind one of the two screens. If the actor went behind the translucent screen we would see the chimp-man remove the object from the box; if he went behind the solid screen, he would not. When the apes saw the man go behind the solid screen, the eye-tracking showed that they again looked at the box he last saw the object in, indicating an anticipation of his actions. But when they saw the human actor go behind the translucent screen, the apes did not look at either box in particular. According to the researchers, this showed that the apes understood that the human actor has a mind that takes in information and makes decisions based off of the information they have. The authors write:

“These results together corroborate the idea that … nonhuman animals have a theory of mind and do not simply rely on behavior rules to interpret and anticipate others’ actions.”

Yes it's true, you can do a lot with a monkey suit. At the end of the day though, it's just a bunch of apes sucking down juice watching another bunch of apes act ridiculous. Never forget that. It's important.

The Controversy-Filled Stones of Loch Ness