Legally Haunted Mansion Up For Sale in New York

"Having reported [the ghosts'] presence in both a national publication... and the local press... defendant is estopped to deny their existence and, as a matter of law, the house is haunted."

In the court of Internet comments, it didn’t happen if you don’t have a photo. In the court of haunted house real estate, it’s not haunted unless you have a court ruling that says is it. Well, at least in New York, where the New York Supreme Court, Appellate Division, ruled in 1991 in the case of Stambovsky v. Ackley that a house in Nyack being offered for sale by Helen Ackley was indeed haunted, but Ackley was under no obligation to disclose its ghosts to buyer Jeffrey Stambovsky. Now, the famous house at 1 Laveta Place is up for sale again. This time you know it’s legally haunted. Are you interested?

“Hudson Riverfront Queen Anne Victorian circa 1890. This perfectly restored classic is located on one of Nyack's prettiest tree lined dead end streets. Previously home to the award winning film director Adam Brooks, indie singer/songwriter Ingrid Michaelson, and now home to the singer rapper Matisyahu, the beautiful space and soft river light form a perfect sanctuary to nurture the creative spirit. River views from almost every room foster an unparalleled connection to the river in this spacious yet intimate home.”

Before you ask, the real estate listing does not say anything about this beautiful home on the Hudson River being haunted. However, as the court stated in its ruling, its history is well known – at least in Nyack. Helen and George Ackley bought the rundown house in the late 1960's. (Photos of the house when they moved in here.) the seller didn’t tell them about it being haunted, but local children did. According to Helen’s article in 1977 in Reader's Digest, they were right.

''He was sitting in midair, watching me paint the ceiling in the living room, rocking and back forth. I was on an 8-foot stepladder. I asked if he approved of what we were doing to the house, if the colors were to his liking. He smiled and he nodded his head.''

In various interviews, Helen revealed that she had only seen one ghost but her children saw two more and they and visitors to the house had otherworldly encounters such as phantom footsteps and slamming doors, unexplained appearances of rings and coins that just as suddenly disappeared, and mysterious conversations heard in empty rooms. Based on these experiences and encounters, Helen believed there were three ghosts – a married couple and a Revolutionary War Navy lieutenant.

“Then I heard the bedroom door creak, and the floor boards squeak. My back was to the edge of the bed. Suddenly the edge of the bed by my mid-section depressed down, and I felt something lean against me. I went literally stone stiff! I was speechless and could hardly move. I was able to twist my neck around enough to see a womanly figure in a soft dress through the moonlight from the bay windows. I felt like she was looking straight at me. After about minute, the presence got up and walked back out of the room.”

The female ghost was also seen by Mark Kavanagh, the fiancee of Helen’s daughter Cynthia who lived there for a time and believed the ghosts were protective of Cynthia and checking him out. Helen agreed that the ghosts were benevolent because, like the one she saw, they approved the renovations the Ackleys made. After getting that landmark ruling from the court, Helen finally sold the house in 1991 and hoped the ghosts would move with her to Florida, but they apparently stayed. In 1993, paranormal researcher Bill Merrill and medium Glenn Johnson claimed to have made contact with the married ghosts and identified them as Sir George and Lady Margaret. Sir George and Margaret told Merrill and Johnson they lived in the area in the 1700s and missed the Ackleys – those conversations and more are detailed in their book, Sir George, The Ghost of Nyack. 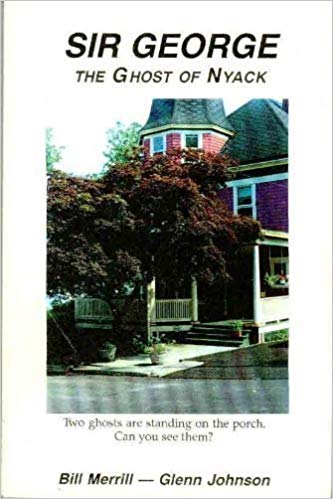 The house is gorgeous (plenty of photos in and out in the listing) and listed for $1,900,000. None of the celebrities who lived in the house after the Ackleys reported seeing Sir George or the other ghosts or even the spirit of Helen, who passed away in 2003. That doesn’t mean they’re not there. Based on past experience, the new owner may be wise not to change the decorations too much … at least not without putting up some samples to see if Sir George approves.

When “Something” Comes Calling in the Night