The expression “Well I’ll be a monkey’s uncle” is used when expressing disbelief and has been traced back to reactions to Charles Darwin’s theory of evolution and the 1925 Scopes Monkey Trial on teaching evolution in public schools. Today, it may need to be changed to “Well I’ll be a monkey’s student” after a new experiment found that monkeys scored better than humans in a computer game developed to test ‘thinking outside the box’. Is this a referendum on public schools, evolution or monkeys? Does this mean “Planet of the Apes” is a documentary?

“We are a unique species and have various ways in which we are exceptionally different from every other creature on the planet. But we’re also sometimes really dumb.”

In a Georgia State University (whose panther mascot may now have to be changed to something smarter) press release announcing a new study by university psychology researchers, Julia Watzek, a graduate student in psychology and lead author in the study, put the results of her experiment in terms even humans can understand. A total of 56 humans, 22 capuchin and 7 rhesus monkeys participated (the humans voluntarily, the monkeys – not so much). The simple computer game involved following a pattern by touching a striped square, a dotted square and then a triangle when it appeared. For a reward, humans got a pleasant tone or points while the monkeys got banana pellets. (Does this sound unfair to you humans?) Wrong results got a timeout from playing the game and no reward. 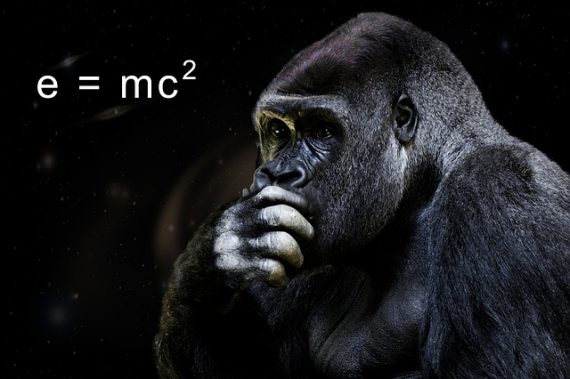 After the initial strategy was learned, the triangle started showing up first. The researchers were surprised when 70% of the monkeys hit the triangle immediately and got their banana pellets while all but one of the humans waited to do the right thing and touch a square and a dot first. Does this mean the monkeys were smarter or just less into fair play and following the rules?

“There’s a heavy reliance on rote learning and doing it the way you were taught and to specifically not take the shortcut.”

Ah, rote learning – the bane of students who hate memorizing and teachers who would rather that students think outside of the box. Watzek points out that learned biases can be good (following a known safe path to work) or bad (investing in risky stocks even after analyst warnings). However, this is a test involving dots and banana pellets – would the monkeys still win if they had to pick stocks? (Based on the performance of some mutual funds, this doesn’t sound like a bad strategy.)

“I’m not proposing to topple the entire Western education system, but it is interesting to think through ways in which we train our children to think a specific way and stay in the box and not outside of it. Just be mindful of it. There are good reasons for why we do what we do, but I think sometimes it can get us into a lot of trouble.”

Watzek is implying that all of the talk we hear about “thinking outside the box” really isn’t being taught in schools as much as we might think. While rote memorization is taught less than before, do the results indicate that learned biases might be inherent in humans? Study co-author Sarah Pope took the test to Namibia and gave it to a semi-nomadic tribe that has never been exposed to Western education. Half of the subjects still ignored the surprise triangle option. She found the same results at Zoo Atlanta where more than half of the children tested used the learned option.

“This was a great example of how a really elegant, simple study can be hugely impactful in various contexts. It’s adding to the larger body of literature on why humans can be so different from other primates.”

Does different mean dumber? If history is any indication, a human inferiority complex could be bad news for monkeys and apes. Let’s hope they’re not ‘different’ enough to turn on the TV and stream “Planet of the Ape” movies.

A Mysterious Lake Monster in the Wilds of Siberia